The complaint was filed by a member of the Vishwa Hindu Parishad who accused the principal of being part of a "conspiracy" to ruin communal harmony. 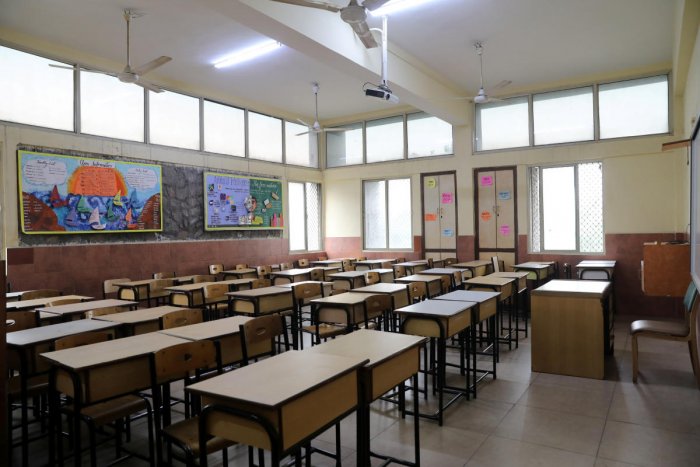 Representative photo of an empty classroom in Delhi-NCR. Photo: Reuters/File

New Delhi: The principal of a private school in Jhunsi in Uttar Pradesh’s Allahabad district was booked on Wednesday, May 4 for allegedly telling students to dress up in ‘Eid attire’ and send the school a 20-second video of them saying ‘Happy Eid’, the Indian Express reported.

Bushra Mustafa, principal of the Nyaya Nagar Public School in Jhunsi’s Havelia area, was booked on the basis of a complaint filed by one Lalmani Tiwari, the zonal in-charge of the Vishwa Hindu Parishad’s (VHP) Gau Rakhsa Vibhag.

Tiwari, in his complaint, claimed that the principal’s message caused anger among those who belonged to different religions.

“School Principal Bushra Mustafa is a Muslim woman who has a communal thinking and she has misused her position,” the newspaper quoted the complaint as saying.

Further, the complaint called Mustafa’s actions a part of a “conspiracy” meant to hurt religious sentiments and “ruin the atmosphere of schools and colleges.” It even compared the instructions for the Eid videos to the hijab row in Karnataka, saying that the latter was done to “ruin communal harmony”.

In January this year, a college in Karnataka’s Udupi had barred women students from attending classes wearing hijab. The college’s order was supplemented by a similar order by the state government, leading to protests from the Muslim women students, consequent protests from Hindu students and eventually, a nation-wide issue. In March, the Karnataka high court upheld the government’s order.

Mustafa has been charged under Indian Penal Code (IPC) Section 153 A (Promoting enmity between different groups) and 295 A (deliberate and malicious acts, intended to outrage religious feelings of any class by insulting its religion) and under IT Act Section 67 (transmitting obscene material in electronic form).

In his complaint, Tiwari also claimed that the principal’s “intentions” were revealed by the fact that no activity was prescribed to the students for two “major Hindu festivals” – Akshay Tritiya and Lord Parshuram Jayanti – which fell on the same day as Eid, May 3.

The school administration responded to the accusations, claiming that similar activities wherein students are required to dress up and send in videos are conducted for festivals of other religions as well as secular national holidays, such as Republic Day.

“We do similar activities for Diwali and Dussehra where students dress up as Lord Ram and Hanuman and other Hindu gods and goddesses,” the Express quoted Suchitra Verma, secretary of Nyaya Nagar school, as saying.

Verma also called Mustafa a “secular-minded” person and said that students are told to engage with festivals of all religions so that they can learn more about them.

Verma, on her part, alleged that the complaint against Mustafa is the result of a conspiracy on the part of a neighbouring school which is jealous of the work Mustafa does.

She went on to say that the matter has been exaggerated and that she feels “there are some people who have made an issue out of nothing to bring the principal down as her record is excellent.”