Not So 'Local' After All: Meet the People Who Tried to Violently End the Farmers' Protest 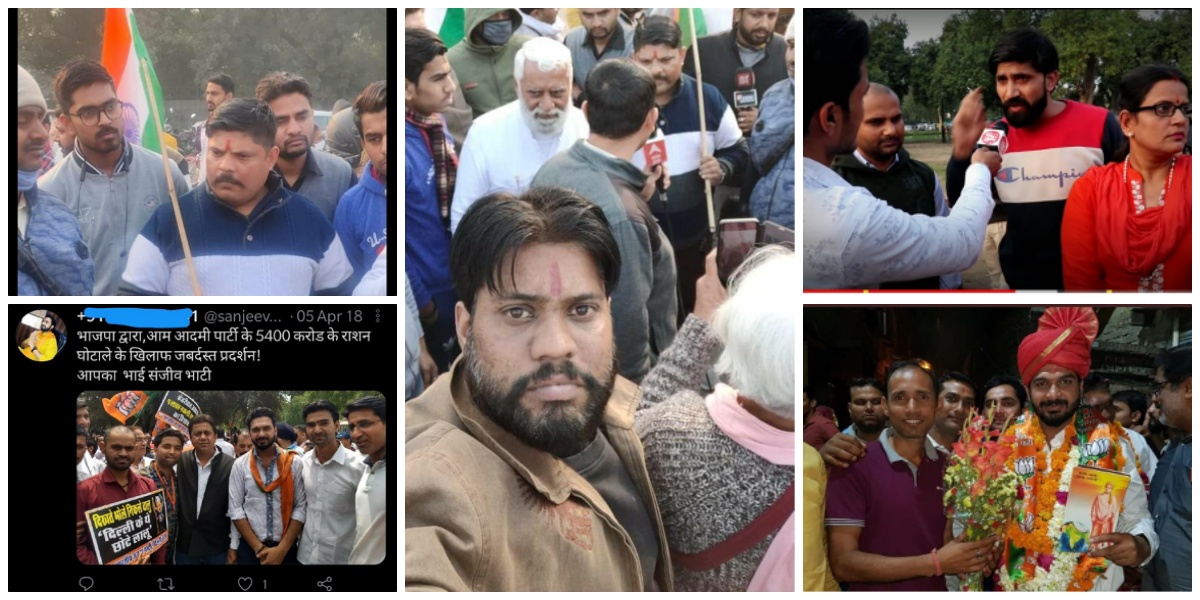 New Delhi: On January 28, a mob of angry protesters carrying the Indian flag and shouting slogans like “Desh ke gaddaron ko, goli maaro saalon ko (Shoot the traitors of the nation)”, “Khalistaniyon ko bhagao (Chase away the Khalistanis)” and “Delhi police lath bajao, hum tumhare saath hain (Beat them up Delhi police, we are with you)”, stormed the farmers’ sit-in at the Singhu border. The mob reportedly destroyed tents, hurled petrol bombs and ransacked a community kitchen run by farmers.

This resulted in violent skirmishes and stone-pelting between the two groups. Most mainstream media organisation called this mob a group of “locals”, who were enraged by alleged separatists replacing the Indian flag with a “Khalistani flag” at the Red Fort (a claim that several fact-checkers have disputed; see here, here and here).

As the news of armed raids at the Singhu protest site spread, independent journalists quickly pointed out that Bharatiya Janata Party supporters had disguised themselves as “locals” on the day. Many actual locals have levelled the same allegations in several ground reports. While most pro-government media claimed that these so-called locals were first attacked by the farmers, multiple videos suggest that these claims are misleading.

Alt News and independent journalist Mandeep Punia identified two of these protestors – Aman Dabas and Krishnan Dabas – both associated with the BJP. Punia had also raised questions on the role of Delhi Police. Later, he was arrested for allegedly preventing policemen from discharging their duty. He was released on bail after four days in custody.

Also read: Govt Thought No Water, No Protest. They Were Wrong

The Wire’s investigation has managed to establish links of many more of these alleged “locals” with the BJP and its affiliates. Apart from local BJP leaders, leaders of Hindu extremist organisations were present at the Singhu border with their cadres. The Wire found that neither were these protestors local villagers, nor is this the first time that they have attempted to violently uproot peaceful protestors.

Last year, some of these protestors were spotted at Shaheen Bagh and a month later in North-East Delhi, leading to large-scale anti-Muslim riots. This time around, the same set of protestors wanted to clear the farmers’ blockade.

After the skirmishes, observers shared one Vishnu Gupta’s social media calls to end the farmers’ protests. Vishnu also happens to be chief of the Hindu Sena, a group that has been in the news off and on for protesting against anti-government protests. During the JNU fee hike protests, the Hindu Sena stuck posters outside the campus labelling the protestors as “jihadis and terrorists”. The Hindu Sena had also threatened violence against Shaheen Bagh protestors for blocking roads. This time around, Vishnu called upon his supporters to free the roads of ‘anti-national and Khalistani elements’, even issuing an ultimatum.

The Wire found this man to be Sanjeev Bhati, a BJP supporter and former Bharatiya Janata Yuva Morcha (BJP’s youth wing) leader, and now the founder of a Hindu nationalist organisation called the Hindu Army. Bhati has stood up for dozens of similar Hindutva causes in the past, like protests against “love jihad”, and has close links with BJP leaders. 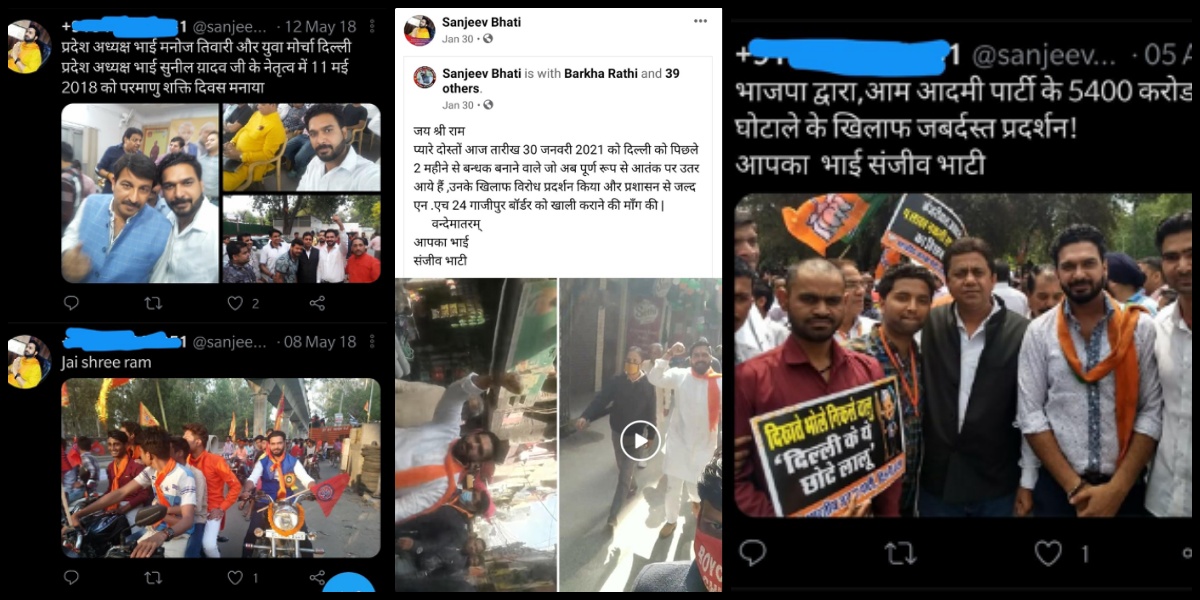 More recently, he made headlines for leading a protest against the government demolition of a Hanuman temple in Chandni Chowk. His live video of the demonstration has been shared 12,000 times on Facebook. Bhati has since featured in a viral video of a right-wing YouTube channel named Youth Media TV, making provocative comments against the farmers’ protests. He has also featured in ultra-right Khabar India videos.

“You do not deserve to sit on our roads. These terrorists will have to clear the roads otherwise we will shove their swords in their bottoms,” warned Bhati and his supporters who were trying to clear the roads at the Ghazipur farmers’ sit-in.

Bhati also uploaded several Facebook live videos from the Ghazipur protest site on January 28 (see here, here and here). He asks his followers to come to the border in large numbers and “free” them. He also makes hateful comments against farmer leader Rakesh Tikait in one of these live videos shot near the farmers’ stage. He vows to speak to the “fake farmers” in a language they understand. Police can be seen in the background while he makes these calls to violence on social media. These video messages have been shared hundreds of times and are still available online.

A bearded man in a red jacket can be seen standing next to Sanjeev Bhati in the video from Ghazipur border. The red jacket man is a regular face at Hindutva protests in and around Delhi. The Wire’s investigation found this red jacket man to be present in Maujpur during the Delhi riots. Some right-wing channels reported him to be a ‘local’ in Maujpur. 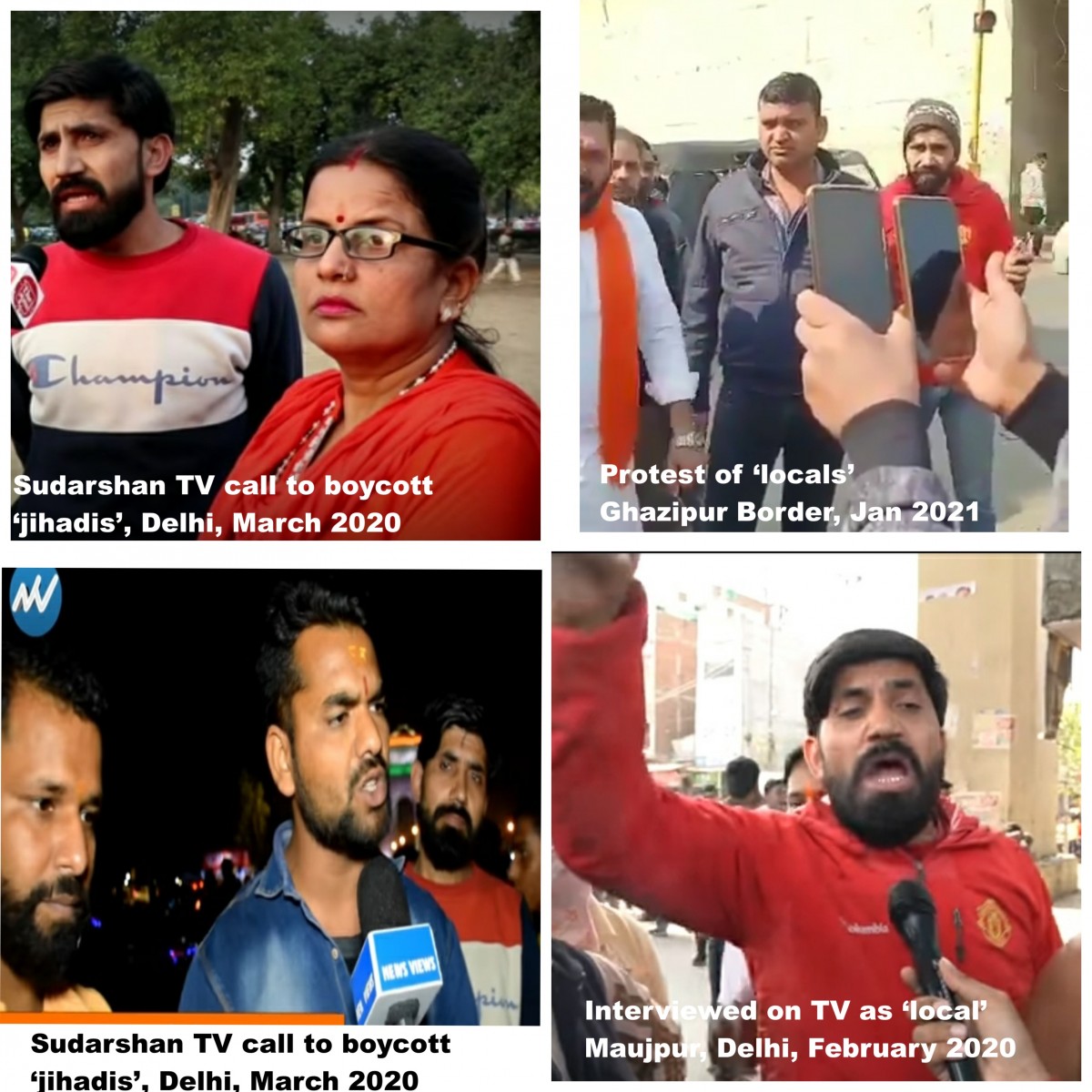 The many avatars of ‘red jacket man’. Collage: The Wire

In another video, a week after the riots, the red jacket man appears at a protest at Jantar Mantar with Ragini Tiwari and Suresh Chavhanke. The protest at India Gate called for a complete economic boycott of “jihadis” (8.58 to 9.18 in the video). He claims to be from Greater Noida. He also talked about “awakening Hindus” and teaching lessons to Muslims in Maujpur. Many others who appear in this economic boycott video (Vinod Aazad) were also seen protesting against the farmers’ sit-in.

Making a video from his car, Deepak Singh called upon “dharam-yoddhas” to vacate the Singhu border. “Our issue is that we watch like cowards when these traitors create ruckus. I will reach there in 30 minutes. Today nationalists have to unite too. Delhi is sitting on a mountain of explosives; they can vitiate the atmosphere anytime like they did during the February riots last year. Today if we do not suppress this spark of treason then it will burn our city,” said Deepak.

His social media and Facebook is filled with violent messages and campaigns against the Muslim community and now Sikhs. Just a few days back Deepak, Vinod Aazad, Ragini Tiwari and several other Hindutva leaders were protesting against “land jihad”.

Vinod Sharma, popularly known as Vinod Azad, is a local Sudarshan Vahini leader from Delhi. Vinod mobilised protestors to come and get the Singhu border vacated. On his Facebook, live videos and other pictures of his supporters at Singhu are available. A YouTube channel had called him and his supporters “villagers from 40 nearby villages” who had come to end the protests. In the video, angry protestors can be seen abusing the farmers. Vinod’s live video shows him along with other protestors crossing the barricades and sloganeering despite police presence.

Vinod mobilised Hindutva protestors at the Singhu border for two days. This can be confirmed by his social media calls and the YouTube videos he is featured in. Like others, he can also be spotted in several videos with Ragini Tiwari and Sudarshan TV editor Suresh Chavhanke (who shot to fame because of his communal show on IAS admissions). On November 1, Chavhanke and Ragini Tiwari had called for a protest against love jihad at India Gate. At the protest, anti-Muslim slogans and calls to commit violence against Muslims were made by the protestors. 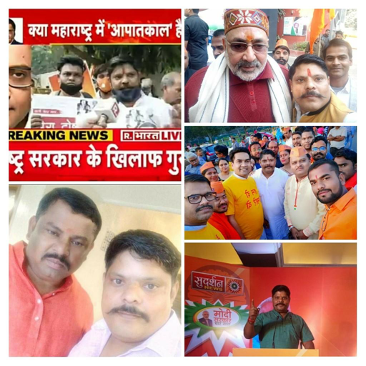 Vinod’s aide Harish Kashyap and one Sanatani Sonu were also present at the Singhu border. Harish has shared live videos on his Facebook. He was interviewed as a ‘local’ as well. In a video of a mob beating a protester at Singhu border, Harish can be seen hitting (see 5.20 to 5.50) the protester and also pelting rocks at the farmers. The video was uploaded by Khabar India channel. Before the violence, members leading the mob were interviewed by the anchor. During the violence, the reporter kept referring to the protesting farmers as Khalistani terrorists incited by Sikhs For Justice. 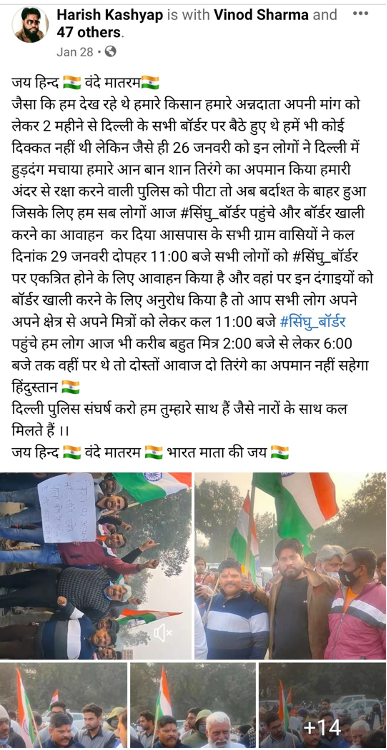 Another YouTube channel called Sonu and Vinod locals and villagers. In his Facebook live from Singhu, Sonu has called for uprooting and chasing the “Khalistanis” back into Punjab. Last Week Sonu posted his pictures with BJP leader Tejaswi Surya. 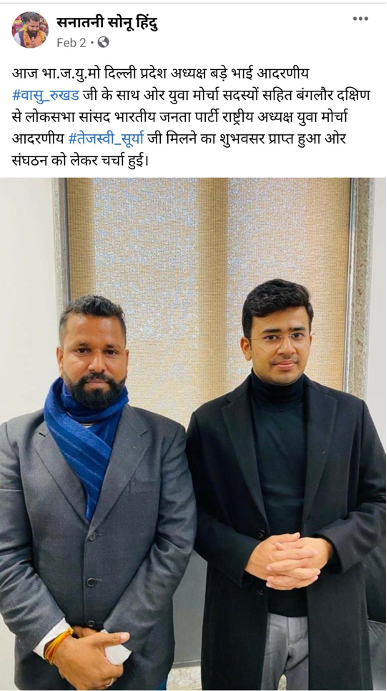 A young man who has featured in several viral videos where he eloquently attacks and makes violent remarks against dissenters was protesting against farmers while pretending to be a local. In 2019-20, he was a “local Delhiite” disturbed by the anti-CAA protests and Muslims. At the Singhu border demonstration, he was reported to be a villager who has been disturbed by the protesting farmers.

In another video, during the BJP election campaign in Delhi, he can be spotted amongst a group of BJP supporters, donning a BJP cap and raising violent slogans. He’s just one amongst hundreds of characters. 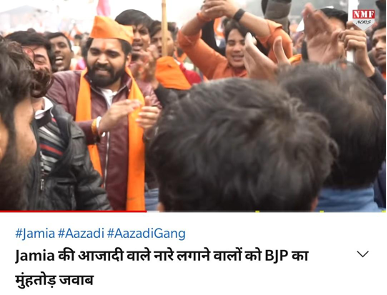 Other characters include a “real farmer from Bihar”. On December 7, his angry monologue to Khabar India channel went viral on Twitter. It was tweeted by a BJP influencer account called “ExSecular” who’s also followed by Prime Minister Narendra Modi. This “real farmer from Bihar” called Sudhir Pande is coincidentally also an ardent Sushant Singh Rajput fan who was angry with those “politicising” the Hathras incident. In some photos, he can be also seen with BJP leaders Kapil Mishra and BJP IT cell chief Amit Malviya. 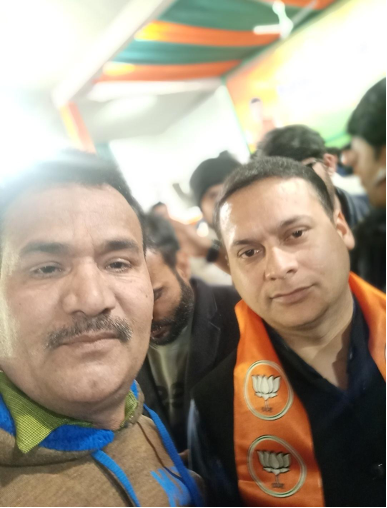 There are many others who regularly appear in these viral videos supporting Modi, insulting his critics and sometimes even threatening violence. They are quoted as “enraged locals” whose daily life has been inconvenienced by anti-government protests. These characters are never introduced by their name. They are rather introduced as Muslim behen, nationalist maulvi, real farmer, real migrant, harassed voter and of course “locals”.