The family of Ibris Khan, the first officially reported death in the Khargone communal clash, had to wait for days before police informed them on the whereabouts of his body.

People gather at Ibris Khan's house to mourn his death. Photo: By arrangement.

His family was out on the streets, searching every nook and corner, including mortuaries, until Sunday, April 17, for Ibris. To their shock, they discovered his body 120 kilometres away at the M.Y. Hospital morgue, in Indore. 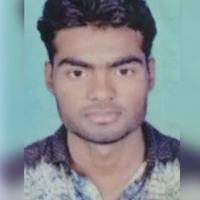 Ibris, son of Saddam Khan, was a resident of Islampura in Khargone. He was working as a sweeper, earning a daily wage, under the local municipal corporation. Ibris leaves behind his wife and eight-month-old son.

While the post-mortem report states that Ibris died of severe head injuries, Ibris’s brother, Iqhlak Khan, has accused the police and the residents of Khargone of being involved in the killing of his brother. Police have said they had no role.

According to Iqhlak, he last saw his deceased brother in police custody on April 10, the day of the clashes.

Ibris’s mother, Mumtaz, who is also an eyewitness to the clashes in Khargone, said that when Ibris went out after Iftar to pray at a mosque he was attacked by a raging mob. Before the family could intervene, she said, he was dragged into a police van as he suffered a serious head injury.

Ibris was detained along with his friends that evening. His mother, however, said that he was not sent to jail with the other arrested men. “He was killed by the police,” said the 65-year-old Mumtaz.

Echoing the same, Iqlakh recalled that his brother had gone to the local Anand Bazar mosque for prayers that evening after Iftar. It was then, Iqlakh added that, Ibris was mercilessly beaten up by a mob, leading to head injuries. “He was not taken to a hospital, but was rather detained in the police station,” said Iqlakh, adding that he does not know the names of those who killed his brother.

The family received information on Ibris’s body on April 17 night, when a policeman showed up at their house to tell them that Ibris’s body was being kept in a morgue in Indore.

Iqlakh claimed that the information was only given to their family after he had made several attempts to search for his brother. He had also visited the local police station multiple times. He added that it was only after he told police that he would approach the media if the information on his missing brother was not provided that police spoke to him.

“This is the sole reason why a policeman came down to our place on Sunday late evening to inform us about Ibris’s death,” he said.

Upon identifying Ibris’s body at the government hospital in Indore, Iqlakh said they had not only found head injuries but severe cuts on his brother’s face and legs. One of his eyes was out of its place.

Ibris’s family has accused police of withholding information about his arrest, and keeping his death a secret.

The family – Iqlakh and Mumtaz – pointedly asked as to why local police took a week after Ibris’s death to call them to identify the body, that too after registering a case of murder on April 14, naming unidentified men, without letting them know anything. This was just 12 hours after Ibris’s brother, Iqlakh, registered a missing complaint at the same police station.

The FIR (first information report), registered under Section 302 and 34 of the Indian Penal Code, states that Ibris was murdered by seven to eight unidentified men and his body was found at a cotton mill in a pool of blood. Ibris’s head was crushed by a stone, according to the FIR.

On the claims of Ibris’s family, Rohit Keshwani, superintendent of police, Khargone, says, “On April 10, during the Ram Navami procession, there was a disturbance in the Islampura area. During this, a young man was found injured. The police immediately took him to Khargone Hospital for treatment, where he died. Information was collected about the youth, but due to lack of identification, the body was sent to Indore after registering an ‘unknown’ murder case.

“On April 14, a report of a missing person was registered in the police station. On Sunday, his family members were called for identification. After identification, the body was brought to Khargone from Indore and the last rites were performed on Monday,” the SP said.

State home minister Narottam Mishra, speaking on Ibris’s death, said that a case of murder has been registered against seven to eight unidentified men, adding that the police are investigating the matter.

The district administration has announced a compensation of Rs 4 lakh to Ibris’s family.

Ibris Khan’s death is the first officially reported death in the Khargone communal violence. Many others are missing in its aftermath.

Akansha Deshmukh is a Bhopal-based investigative journalist who focuses on serious crimes and political corruption. She can be reached at deshmukhakansha4@gmail.com.