A picture of J&K Hostel at Jamia Millia Islamia has been shared with the claim that JNU accommodates Muslim students from J&K “free of cost”.

A widespread WhatsApp forward carries a picture of a hostel building claiming that the Congress government had constructed a 400-room hostel for Jammu and Kashmir students at Jawaharlal Nehru University (JNU) in 2012. “In this hostel, no Hindus or other religions can stay.” The message claimed that Muslim students from J&K are accommodated in the college hostel for “free”.

The message was viral on Facebook as well, but the content isn’t available now on the social media platform. 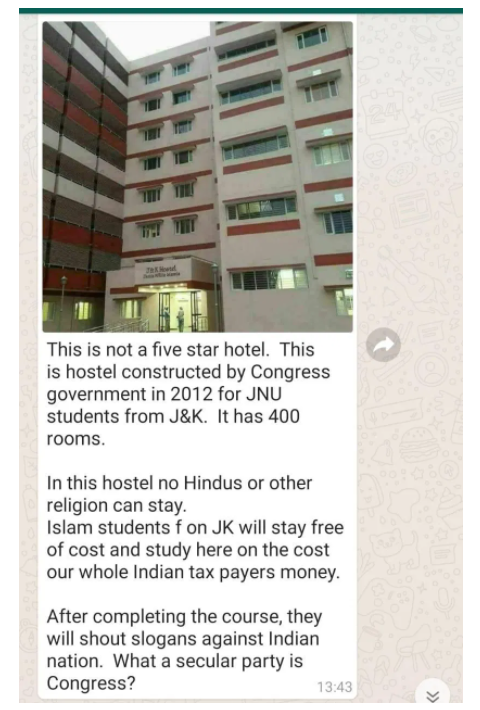 The claim was also viral in May however suggesting that the hostel is in Jamia Millia Islamia.

The picture does not show ‘J&K hostel’ at JNU. The board in front, faintly visible in the picture, reads ‘Jamia Millia Islamia.’

Union minister Rajnath Singh and then Jammu and Kashmir chief minister Mehbooba Mufti were invited to inaugurate a girls’ hostel at Jamia Millia Islamia (JMI) in 2017. “The hostel will cater to female students from J&K pursuing any course at the Central University. The hostel has 135 rooms,” reported The Hindu on November 17, 2017.

The inauguration was postponed amid protests, however, the 400-bed facility was made accessible to students in the following months.

“The plan for the hostel was first conceived in 2012 when a memorandum of understanding (MoU) was signed between Jamia and the Ministry of Home Affairs. A senior ministry official said the project was expedited after Mr. Singh’s visits to the State over the past two years,” The Hindu’s report further said.

The claim that Congress constructed the hostel in 2012 is false. Even though an MoU between JMI and then Congress government was signed in 2012, the hostel was constructed under BJP’s rule.

Former provost of Jamia’s J&K Hostel Dr Sabiha Zaidi confirmed to Alt News that the facility does not accommodate students on the basis of state or religion. “It is open to female, full-time students, same as the other girls’ hostels in the campus. The college does offer some edge to students from the northeast and Jammu and Kashmir who might find it difficult to look for alternate accommodation but the claim that students from other states cannot apply for admission is false. The J&K Hostel has been expanded since its inception to accommodate more candidates,” she said, adding that students also have pay hostel fees.

According to the JMI hostel manual 2019-2020, J&K Girls’ Hostel has 700 beds, and students whose parents/spouse reside and work in Delhi/NCR are “not necessarily eligible for the hostel accommodation”. Hostel admission to the rest of the students is based on merit and other factors including the distance of origin and economic status.

The list of provincially selected candidates for J&K Hostel, academic session 2018-2019, includes several Hindu names. The number of Muslim candidates is significantly higher because JMI is a minority institution.

Hostel students are required to pay fees in two instalments. The accommodation, unlike claimed in the viral message, is not free. Physically-challenged students whose parents’ annual income does not exceed Rs 1.5 lakh are exempt from paying the room rent.

Does JNU have a ‘J&K Hostel’ that offers accommodation to only Muslim students from Jammu and Kashmir?

A picture of J&K Hostel at JMI has been shared with the claim that JNU accommodates Muslim students from J&K “free of cost”. However, the independent statement is also untrue.

According to the college reservation policy for hostel admission, 22.5% seats are reserved for SC/ ST candidates and 3% for physically handicapped (PH) students. Admission to hostels is based on several factors, including priority to outstation students. J&K has not been singled out. Furthermore, SC/ ST/ PH students whose parents’ annual income is less than Rs 75,000 are exempt from the payment of room rent.

The viral message is therefore false on all accounts.

1. The picture shared is the J&K Hostel in Jamia Millia Islamia, not JNU.

2. Both colleges do not provide free hostel accommodation to Muslim students from J&K. Admission is granted irrespective of state or religion.