The claim by several prominent people and news personalities that the Khalistan flag was hoisted by protesters during the tractor rally in Delhi is false, AltNews has found. 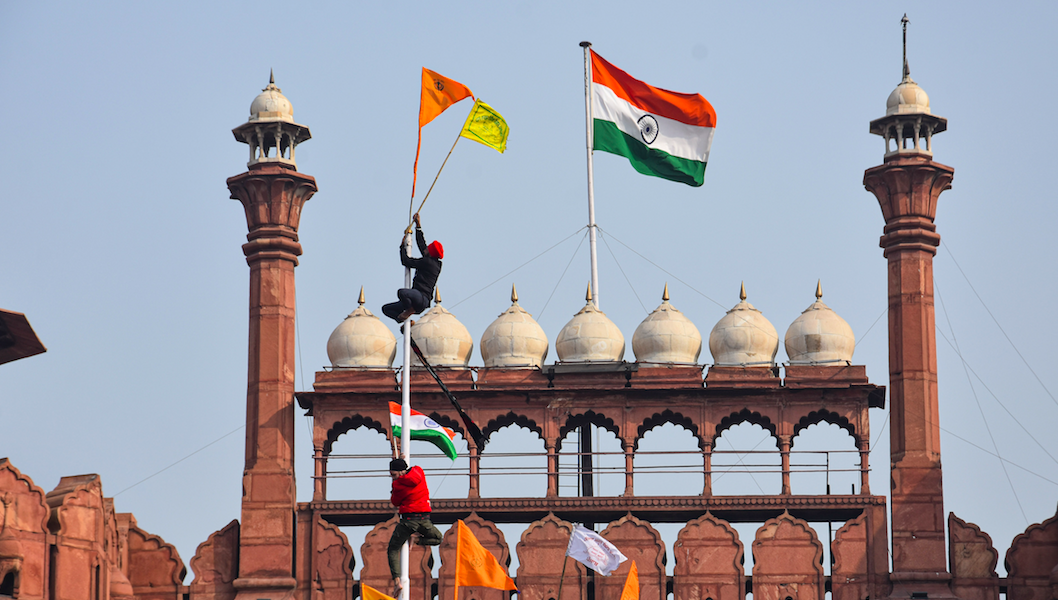 As part of the protests against the Centre’s farm bills, farmers’ unions and the Delhi police had chalked out agreed-upon circular routes from Ghazipur, Singhu and Tikri borders for the Republic Day tractor parades.

It was decided that the protesters will enter Delhi but remain in areas near the border from the three entry points. Several protesting groups, however, veered off the course and were met with police lathicharge and tear gas shells. They entered the iconic Red Fort and hoisted flags from some domes and from a flagstaff, on the ramparts of the fort, used to unfurl the tricolour on Independence Day.

1) the protestors took down the Indian national flag, and

2) replaced the tricolour with the Khalistan flag.

“What point are these farmers trying to make by replacing the tricolour with their religious flag?” questioned Sonam Mahajan.

Editor-in-chief of Times Now Rahul Shivshankar also claimed that the tricolour was replaced. But he added that the one hoisted was a flag of farmers’ union or religious sect.

Disquieting assault on our most visible national symbol. That too on #RepublicDay. Our Tricolour replaced at iconic flagpole at #RedFort. Was this protest always about undermining our State? | #RDaySpiritShamed pic.twitter.com/Bfp1psRsAJ

This fact-check has been divided into two sections that debunk both claims separately.

1. Indian flag was not replaced or taken down

Protesters hoisted a flag from an empty pole mast. They neither took down the Indian flag nor replaced it with a flag of Khalistan. There are several videos that confirm the same. In the video below, the tricolour can be seen atop Lahore gate (entrance to the Red Fort) as the protestor climbs the empty flagpost.

#WATCH A protestor hoists a flag from the ramparts of the Red Fort in Delhi#FarmLaws #RepublicDay pic.twitter.com/Mn6oeGLrxJ

The Indian flag can be spotted in several pictures.

Red Fort is fully occupied by protestors now. The police is now climbing to remove the flag that was hoisted by the protesters.

Flags were also put up on domes from the fort.

2. The flag hoisted by protesters is not the Khalistan flag

The flags hoisted by the protesting farmers are the Nishan Sahib or Sikh religious flags.

“Whether yellow or saffron, triangular flags with the Khanda – two swords – are Sikh flags. They are not Khalistan flags,” said Amandeep Sandhu, author of Panjab: Journeys Through Fault Lines.

He further added, “When a flag is hoisted as a symbol of regime change, the previous flag is brought down and the new flag is unfurled. In this case, the tricolour, the flag of India, continues to be hoisted. It has not been touched. The hoisting of the Sikh flag means that the people of the nation want to assert their identity as well. They want to be counted. They want the rulers of the nation to not take them for granted.”

btw the right wing has the effrontery to raise this on a day the ram mandir is the UP govt’s r-day float.

Sikh flags are also featured on the Punjab tableau during Republic Day parades. It was displayed this year as well.

The screenshot below is from Republic Day parade held last year.

The widespread claim that Khalistan flag was hoisted by protesters during the tractor rally in Delhi is false. Several others further suggested that Indian national flag was replaced when, in fact, the flagstaff was empty.

This article first appeared on AltNews. Read the original here.