Alt News's investigation into the page behind these videos revealed several others in which false claims were spread and Bangladeshi tourists on Delhi's streets were harassed.

A screenshot from a video shared by BJP Leader Ashwini Upadhyay wherein Bangladeshi tourists are asked hateful questions in Hindi (a language most of them don't speak) and are then branded 'infiltrators'.

A man conducting a vox-pop (short interview with members of the public) at Shaheen Bagh with men exiting a mosque after namaz has gone viral. In this video, the interviewer is trying to determine the nationality of the people. They say that they have come from Bangladesh and the interviewer asks them leading questions in Hindi (a language they do not understand) to insinuate that the Aam Aadmi Party (AAP) government in Delhi is offering free electricity and water to Bangladeshi nationals residing in Shaheen Bagh.

It must be noted that most people in the video say that they have come to India for “embassy-related work” and one of them also says in the end that they will be going back to Bangladesh. In spite of this, Bharatiya Janata Party (BJP) leader Ashwini Upadhyay referred to them as “Bangladeshi-Rohingya infiltrators” and wrote that their properties should be confiscated and they should be incarcerated for 10-20 years. He posted the video on both Twitter and Facebook and gained 2.5 lakh views cumulatively.

Using CrowdTangle, a Facebook monitoring tool, Alt News found that over 100 accounts had shared Upadhyay’s post. Most of them are pro-BJP groups or pages. A spreadsheet that lists such accounts can be viewed here.

BJP member Major Surendra Poonia (Retd) tweeted, “Rohingya-Bangladeshi infiltrators are roaming freely in Delhi! Why do they only come to Delhi? Who makes their Aadhaar/ Ration card and Voter ID? Who is in Delhi who is giving them electricity/ living space?” This video gained around 1 lakh views. [Archived link]

BJP Delhi spokesperson Sarika A. Jain also tweeted this clip. She wrote, “…Hindu brothers, see how your Delhi will one day get away from your hands…”

President of the BJP Mahila Morcha Yogita Singh wrote, “In a few months Shaheen Bagh of Delhi will become Bangladesh.”

Are the people in the video ‘Bangladeshi infiltrators’?

The viral video has a logo that says ‘Vartmaan Bharat’ in Hindi. Using this as a clue, Alt News performed a keyword search on Facebook and found a page by the same name. On May 7 and 8, this page uploaded two 5-minute vox-pop videos from Shaheen Bagh. 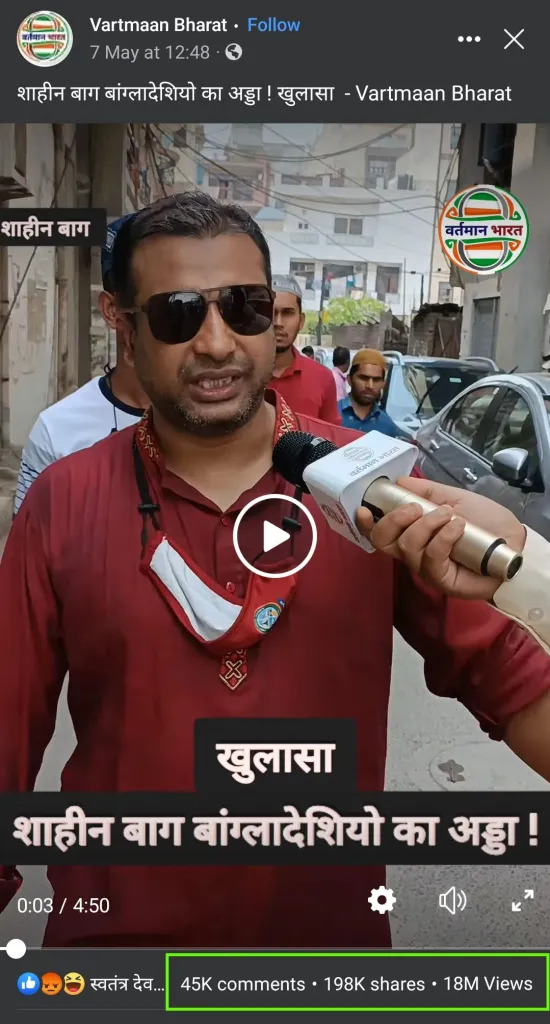 ‘Vartmaan Bharat’ also posted a Facebook Live on May 8 where its “reporter” targeted Shaheen Bagh with bizarre allegations and conspiracies. The statements made by the ‘Vartmaan Bharat’ interviewer are listed below along with timestamps.

Upon viewing the videos by ‘Vartmaan Bharat’, in their entirety, the following points are clear –

1, Not a single person says they are Rohingyas.

2. Multiple people stated they are in New Delhi for the Maltese visa application.

3. Bangladeshi tourists refuted the allegation of receiving free water and electricity from the AAP government.

In an ideal world, just viewing the videos by ‘Vartmaan Bharat’ would be enough to dismiss the outlandish claims presented to the viewer.

The video posted by ‘Vartmaan Bharat’ not only contains misinformation but also discredits the profession of journalism. The interviewer was told by multiple people that they are not fluent in Hindi. Yet, he posed cunning and tasteless questions in a language they do not understand. One such question was, “Did you visit India after crossing a fence or flight?” The interviewer asked this question multiple times.

For one interviewee, the situation was so bizarre he was unable to contain his smile. To his credit, he remained calm and politely asked, “Why would we cross the fence?” The part below is a segment from the May 7 vox-pop which shows the same.

Another instance where the interviewer exposed his propaganda-driven reportage was when he asked, “Are you here for paisa (money)?” after a person responded he is in Delhi for visa formalities. The word paisa sounds phonetically similar to visa.

Alt News collaborated with Shaheen Bagh-based reporter Arbab Ali in order to identify and interview people from the ‘Vartmaan Bharat’ videos. As per our findings on the ground, the videos were shot near Masjid Al-Habeeb in Shaheen Bagh. We also learnt that several Bangladeshi tourists stay in localities near Shaheen Bagh.

We managed to identify five tourists – Arif Hussain, Fahad Mahfuz Chowdhury, Saiful Islam, Akhtar Hussain, and Rashid Ul Hasan. They are staying at a facility that is less than two kilometres away from Masjid Al-Habeeb. Upon the request of the hotel owners, Alt News will not reveal the name of the lodging facilities.

Based on our interviews with Bangladeshi citizens, Alt News can confirm most people in the viral video are in New Delhi for visa process at the Maltese embassy.

When we enquired about his preference of stay, he said, “As per my knowledge, at least 350 Bangladeshis are here to apply for a visa. We looked for several hotels in Delhi but there weren’t any rooms available. So when we heard about the availability of rooms in Paharganj and Sarita Vihar, we came here. The decision to stay at Sarita Vihar was not pre-planned but an outcome of various factors.”

Another tourist, Arif Hussain, applied for a long-term visa to Malta and has been staying in India since 40 days. He said, “That video is wrong… They only asked where I come from. That’s it. They didn’t reveal the purpose of the video.” He added, “This video is very bad for Bangladeshi citizens.”

Displeased with the interview, Fahad Mahfuz Chowdhury said, “One guy took my interview. He asked where I’m living. I told him I’m living in Sarita Vihar. Despite that, he only presented two options to me – Shaheen Bagh or Madanpur Khadar.” Delhi is one of the main settlement areas for Rohingya refugees and has five large unofficial camps in areas like Jasola and other sites along the banks of the river Yamuna. Madanpur Khadar is close to the Yamuna river.

On the condition of anonymity, a staff member of the lodging facility where the four Bangladeshi tourists were staying told Alt News, “We host people not just from Bangladesh but Iraq, Iran and other countries. The reason Bangladeshis stay here is because they aren’t fluent in Hindi. I’m from Assam and fluent in Bengali. They feel comfortable here because they can express their problems to me.”

He added, “Most of my Bangladeshi guests visit India for visa-related formalities in the Maltese embassy. This process can take three to four months. On the eventuality of visa expiry, they seek documentation for an extended stay at Foreign Regional Registration Offices.”

It is noteworthy that there is a Maltese consulate in Dhaka. We wrote an email to them and the Maltese and Bangladeshi embassies in India to understand the nuances of the visa process for Bangladesh citizens. The article will be updated if they respond to our email.

To sum it up, since May 7 and 8, the Facebook page ‘Vartmaan Bharat’ posted multiple videos alleging that Bangladeshi tourists in New Delhi are “infiltrators” and their preferred choice of residence is Shaheen Bagh. The clipped May 7 video, which gained over 18 million views, was further amplified by BJP leaders.

Our ground reportage found that most Bangladeshis seen in the video are in New Delhi for Maltese visa applications.