The Siddharthnagar SP has told 'The Wire' that police have taken cognisance of the video and are verifying the authenticity of the clip being circulated on social media. 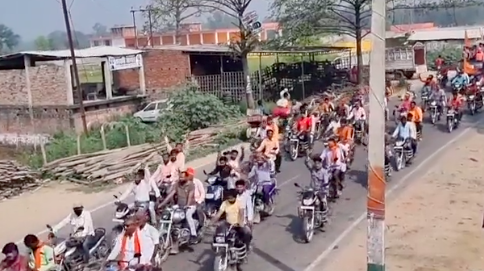 New Delhi: On March 19, 2022, a video of a rally organised by the former MLA of Dumariyaganj, Raghvendra Pratap Singh, in the district went viral on social media.

In the video, Singh can be seen leading a rally of hundreds down a wide road in Dumariyaganj.

Anti-Muslim slogans and calls to murder Muslims are allegedly heard in the video, amidst loud music. “Jab Kat*e ka*te jaayenge, tab Ram Ram chillayenge,” supporters are heard saying, as several have pointed out on social media. The call loosely translates to, “When Muslims will be killed, they will shout Ram’s name” but uses derogatory slurs without naming Muslims.

The former MLA and Hindu Yuva Vahini leader has been in news for multiple instances of hate speech during his election campaign.

The Wire contacted Siddharthnagar SP to know if police has taken any action against the purported genocidal sloganeering.

“The police have taken cognisance of the video. We are verifying the authenticity of the clip and action will be taken accordingly,” the SP told The Wire.

In a live video uploaded to Facebook on February 11, 2022, Singh is heard saying, “Since I became an MLA, they (the Muslims) have stopped wearing skull caps. If you vote for me again, they will start wearing tilaks.”

A case for inflammatory speech under sections 153A (promoting enmity between different groups on the basis of religious, race, language), 295A (deliberate and malicious acts, intended to outrage religious feelings of any class), 505A (speech or writing that causes fear or alarm among a group, or provokes violence against it, on grounds of race, religion, gender and so on) and 298 (uttering words with deliberate intent to wound religious feelings) of the Indian Penal Code was registered against him at the Bhawani Ganj police station.

Police have said investigation is on.

Singh had also verbally abused Hindus who will not vote for BJP and called them ‘traitors’.

“Any Hindu who doesn’t vote for me has Miyan blood in his veins. He’s a traitor. He is a bastard son of Jaichand. He’s a sinner son of his father…I am warning you this time…traitors of Hindu religion will be destroyed,” he had said.

Singh lost the recent assembly polls in UP to SP’s Saiyada Khatoon.

Tensions flared up in the area after the BJP leader and his supporters alleged that pro-Pakistan slogans were raised in SP’s victory meeting in Dumariyaganj, a claim that the SP leader has denied.

While police have registered a case against Khatoon and is investigating the authenticity of the videos, Hindu rightwing groups and leaders have exhorted violence against Muslims on social media in purported retaliation.