Did RSS Really Participate in the Freedom Movement?

How could the RSS have been part of the movement for Indian nationalism when it stands for Hindu nationalism? 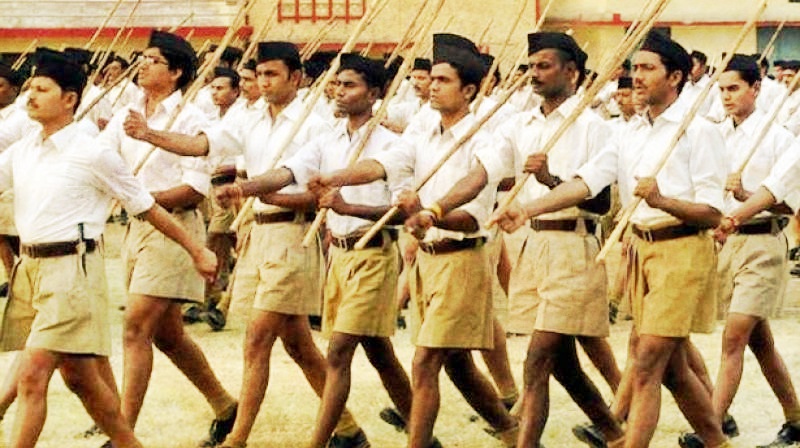 Since the last few decades, the Hindu nationalists have been claiming that they too participated in the freedom movement. Credit: PTI

The freedom movement was all inclusive with the participation of people from all religions and regions of the country. Its underlying premise was pluralism and the concept of a secular democratic India, which bound people in bonds of fraternity. Those who were for Muslim and Hindu nationalism kept aloof from this movement for ideological and political reasons.

For the last few years, Hindu nationalists have been claiming that they too participated in the freedom movement and that it is only the Congress-Left historians who are trying to paint them in a negative picture vis-à-vis the struggle for independence. In a recent article, Rakesh Sinha presents the fantasies of Rashtriya Swayamsevak Sangh (RSS) participation in the freedom movement. His major sources for this claim are from British intelligence reports. His claims that the RSS took part in the Civil Disobedience Movement of 1930 and that the movement was invigorated due to K.B. Hedgewar’s participation in it, are figments of imagination. It is true that Hedgewar did take part in this movement and was jailed for it, but that was purely at a personal level, to be able to meet people who might support his agenda of the Hindu rashtra. There is not a single piece of writing by Hedgewar or the RSS exhorting people to participate in the movement. On the contrary, there are authoritative references to him discouraging those who wanted to participate in the struggle for freedom.

The attitude of the RSS leadership to the freedom movement becomes clear from what M.S. Golwalkar, the second sarsanghchalak of RSS, said (taken from Shri Guruji Samagra Darshan, vol. IV, page 39):

There was some unrest in the mind due to the situation developing in the country from time to time. There was such unrest in 1942. Before that there was the movement of 1930-31. At that time many other people had gone to Doctorji (Hedgewar). The delegation requested Doctorji that this movement will give independence and the Sangh should not lag behind. At that time, when a gentleman told Doctorji that he was ready to go to jail, Doctorji said ‘definitely go, but who will take care of your family then?’ The gentleman replied, ‘I have sufficiently arranged resources not only to run the family expenses for two years but also to pay fines according to requirement’. Then Doctorji told him, ‘If you have fully arranged for the resources then come out to work for Sangh for two years’. After returning home, that gentleman neither went to jail nor came out to work for the Sangh.

On similar lines, during 1942, when the turmoil began, Golwalkar issued instructions that the RSS’s routine work should continue and nothing should be done to annoy the British: “In 1942 also there was a strong sentiment in the hearts of many. At that time too, routine work of Sangh continued. Sangh vowed not to do anything directly.”  This RSS ideologue clearly spells out that fighting against the British has not been part of their agenda, “We should remember that in our pledge we have talked of freedom of the country through defending religion and culture, there is no mention of departure of British from here.” (taken from Shri Guruji Samagra Darshan, vol. IV, page 40)

Now Sinha wants us to believe that lakhs of volunteers of the RSS participated in the freedom movement in 1942 and many of them were punished severely by British. The RSS is known for its disciplined volunteers, so did its volunteers defy their sarsanghchalak to be part of the movement led by Mahatma Gandhi? Even British intelligence – on which a British circular warning officers of the political nature of the RSS is based – needs to be taken with a pinch of salt, as that interpretation of the administration was contrary to what the RSS itself has always maintained – that is a cultural and not a political organisation.

There were no claims of participating in the struggle for India’s independence until much later. It was only once the RSS/BJP inched closer to political power that such claims started being made. One of the earliest attempts in this direction was made by former Prime Minister Atal Bihari Vajpayee. Ahead of the 1998 general elections, he had issued an appeal seeking votes. He wrote that not only was he working for the RSS at the shakha level, but he also participated in the freedom movement. His claim was made around the time of the Bateshwar incident, where he was arrested. Soon after his arrest, he gave a confessional statement in court. The statement he made helped his release from jail and it also named the leaders of the Bateshwar campaign, which was part of the Quit India movement. In this confessional statement, Vajpayee says that he had nothing to do with the damages caused to property by the people who had gone to hoist the tricolour on the building. He confesses that he was not part of the procession and was a mere onlooker. Consequent to his apology he was released from the jail.

Sinha has a fertile imagination so he can claim that RSS’s participation in the Quit India movement was the proverbial last straw for British rulers. The fact is that that RSS’s routine work in the shakhas and camps continued as usual despite some not being comfortable with this. Followers of Gandhi and the Congress were on the streets and in jails.

Now the RSS is trying to insert itself into a space in history where it does not belong.

Ideologically, Hindutva political organisations, despite their inner differences, were mainly intent on undermining Muslim nationalism and to achieve that goal, had no problem in cooperating with the British. All their efforts were geared towards ignoring the diversity of the nation manifested in Gandhi’s central slogan of Hindu-Muslim unity. Today, a new construct is being brought to fore for electoral goals, by erasing the absence of the RSS from the freedom struggle. At a deeper level, how could the RSS have been part of the movement for Indian nationalism when it stands for Hindu nationalism?