Shops near the masjid were being looted, with locals describing the looters as 'outsiders'. 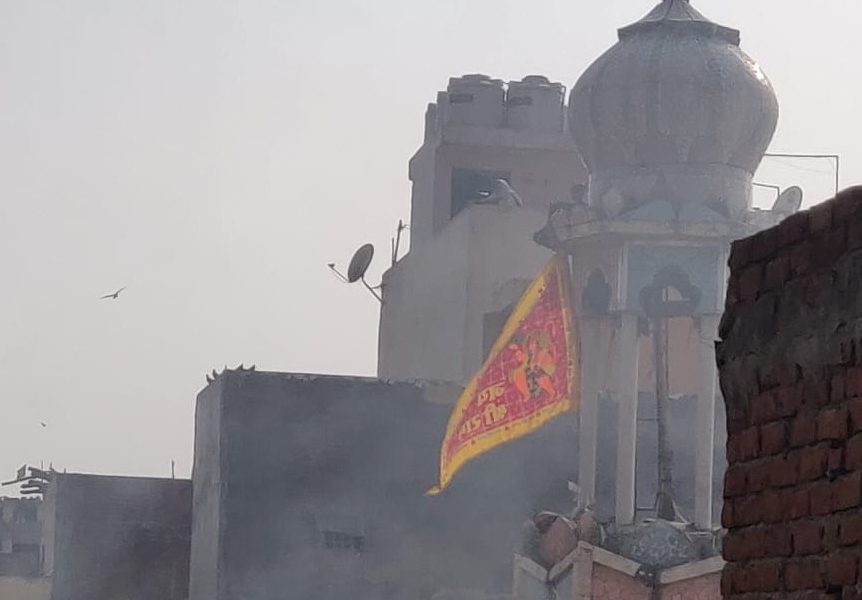 The mosque on fire in Ashok Nagar. Photo: The Wire

Note: In an earlier version of the story, Ashok Nagar was incorrectly described as Ashok Vihar.

New Delhi: A mosque in Ashok Nagar was set on fire late on Tuesday afternoon. A mob shouting “Jai Shri Ram” and “Hinduon ka Hindustan” paraded around the burning mosque, Badi Masjid, and a Hanuman flag was placed on the minaret of the masjid.

In video footage that has since emerged on Twitter, one of the mob is seen climbing up the minaret with an Indian flag in his hand. He attempts to pull down a section of the minaret but does not apparently succeed.

Shops within and around the masjid’s compound, including a footwear shop, were looted in the presence of this reporter. Locals told The Wire that the looters were not residents of the area, which is predominantly Hindu but has a few Muslim families. Though there were firefighters present at the site, the police could not be seen.

Also Read: ‘We Burnt the Mazar Down’: Hindutva Men Talk About the Violence They Unleashed

Locals also said that police removed members of the Muslim community from the locality.

Does this seem normal? Should we still be in denial? From today. Masjid in Delhi. pic.twitter.com/uaRgN7MtsD

Since Sunday evening, Delhi has seen riots and targeted violence, triggered by BJP leader Kapil Mishra’s ‘ultimatum’ to the Delhi Police that the anti-Citizenship (Amendment) Act (CAA) protesters and Jaffrabad and Chandbagh should be removed within three days.

At least ten people have been killed in the violence, including a head constable. In many areas, police have been accused of siding with Hindutva groups in attacking Muslims. On Tuesday, several journalists were also attacked, with mobs snatching phones and forcefully deleting videos or photos that recorded instances of arson and vandalism.

Note: In an earlier version of the story, Ashok Nagar was incorrectly described as Ashok Vihar.