In Gali number 5 of Ashok Nagar, where a mosque was burnt, residents looting a footwear shop could be seen behaving like customers — finding shoes that fit and styles they liked.

New Delhi: On Tuesday, at Ashok Nagar, a mosque was burning. A saffron coloured flag featuring the Hindu god Hanuman had been hoisted atop its minaret, with Muslim houses behind the mosque burnt. The green panes of the mosque were broken, charred, jagged edges burnt black as smoke poured out. An air conditioning unit was still on fire.

We spoke quietly to two young men close by, giving them false aliases to convince them we were Hindu, to urge them to talk. They told us that only a few Muslim families lived in that lane, and the police had helped them all to escape. (This came after the alert which pushed us to go there, which said the police had been uncooperative.) When we arrived, we could see no major police force there, despite it being an easily accessible lane not five minutes away from the main road where the police forces had been stationed. Cries of Jai Shri Ram echoed constantly in the area. 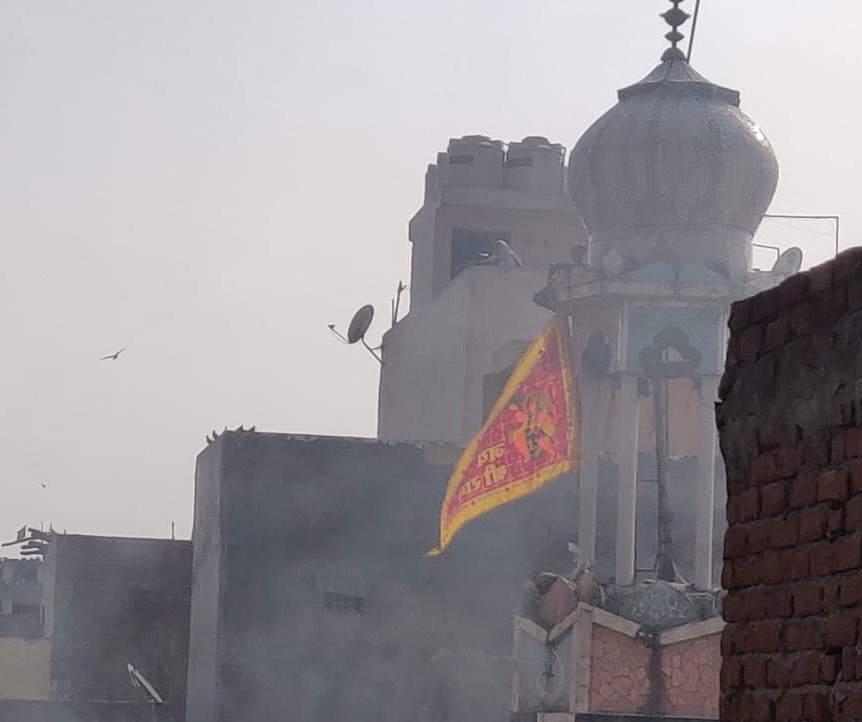 The mosque on fire in Ashok Nagar. Photo: The Wire

When we arrived, a crowd had gathered around the mosque. A fire engine arrived and began to shoot water into the mosque to douse the still burning flames. There were shops beneath the mosque, one of which was a footwear store called Magic Footwear. It was shuttered, and while we watched silently from the corner of a lane looking directly into it, a member of the mob came and broke down its door.

Shoes were neatly lined up along the walls, in pairs, on display for sale. A large desk stood at the front of the shop.

People smiled nervously at each other. These were people who lived in this neighbourhood, who were locals here. A small child ran up and stole a pair before scampering away, breaking the momentary spell of sanity and unleashing a crowd hurrying over each other to steal the shop’s shoes.

“Come on,” a man cried joyously, beckoning the rest of the crowd. “New shoes for everyone!”

Everyone was grinning, and the mood was one of festive celebration. The firemen watched.

Sickened, I smiled too, in fear that letting my horror would lead to being caught out.

A lady who lived just behind where we were standing, and who had been talking to us about what had happened, smiled, said “Ek minute,” and briskly walked out to take a pair of shoes. They were red. As she walked back, a man shouted toward her, “Aunty, why are you taking just one pair?”

Men stood at the entrance to the shop, throwing shoes outside. Some asked if they had the right size, and told their friends to take more pairs in case the one didn’t fit. Small children, about four or five years old, were checking the shoes the other had stolen, to see who had taken a better pair. Three or four men went up to the front of the store and pulled out the desk, throwing it into the street.

“They shouldn’t do that,” the young man standing beside us said. “Uski kya zaroorat hai. (What’s the need to do that?)” When the lady reached him, he jovially said, “Aunty, jodi toh mili na? Ek ke saath kya karoge?” (I hope you found a pair! What will you do with one shoe?) 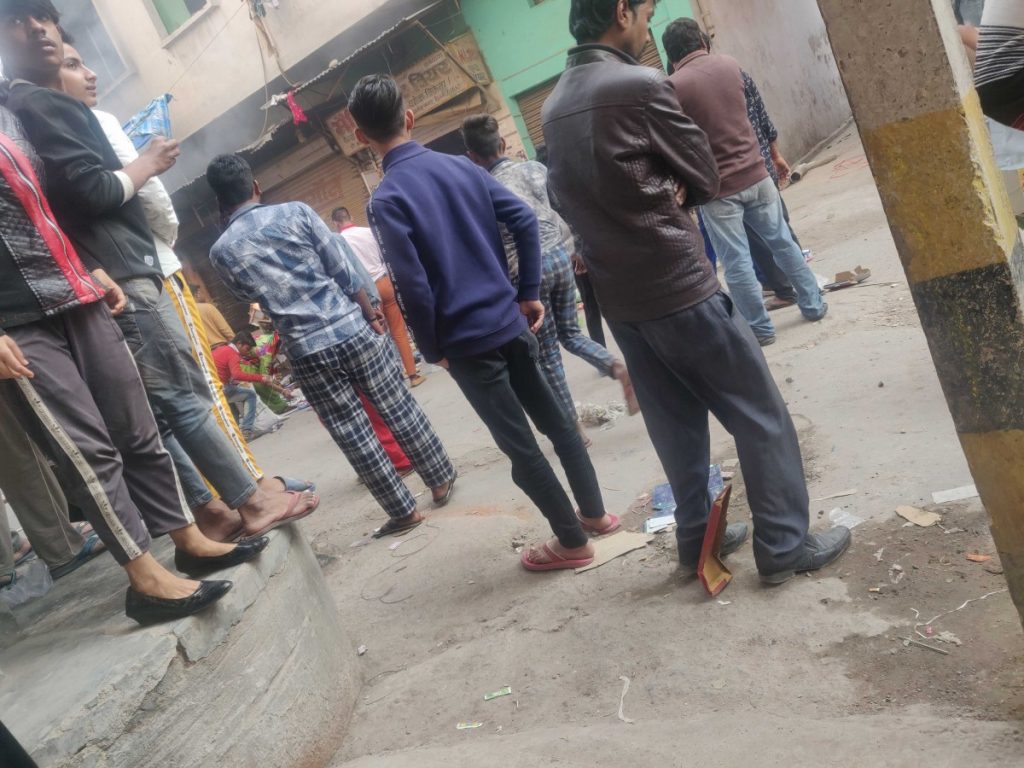 People stand by watching as a shoe shop is looted in Ashok Nagar beneath a burning mosque. Photo: Naomi Barton

Another woman walked out and watched. She asked him if he had taken any shoes, and he swiftly said no.

We wanted to shoot a video, to have proof, but everyone there said they had been given strict instructions not to let anyone take any videos at all. To pull out our cameras was to invite a beating.

The crowd started taking shoes out from the back room, in boxes, unopened. Instead of just one pair or two, or as many as two hands could hold, they were now walking out with unopened boxes tied together with blue twine. One child, about ten, walked by with a clear plastic sack filled with what looked like children’s plastic sandals.

A fireman broke open an electronics mobile store that was beside the shoe shop, presumably in an effort to douse any interior fires going on there. In the chaos, a few people standing behind perked up – a new mobile was worth a lot more than a new pair of shoes.

We drew back, intent on finding a way to get video footage and I saw a young Hindu woman standing in the doorway of a building behind the one facing directly out into the mosque. I went up to her and asked if she could let us onto her terrace. She said no, her father had told her not to let anyone in, and not to let anyone take any videos.

I asked her for her name, in an attempt to build trust, and she said her father told her not to tell anyone her name either. (We found out her name later). After checking to see if her father was anywhere close by, she finally let us in, and took us to her terrace, from where we had a clear view of the saffron flag atop the minaret of the burnt husk of the mosque. While making conversation, she told us she was studying in college.

Quietly she said, “I don’t know why they had to burn the mosque. That’s not right.”

The level of thoughtless, violent glee that the neighbourhood was complicit in had scared her. On her terrace, we had to make sure we covered each other so that the other young men stationed atop other terraces could not see that we were shooting video.

For the residents of Gali number 5 in Ashok Nagar now, life will return to a semblance of normalcy, with a gutted mosque as the backdrop to their lives. And every now and then, they will glance down and see each other walking around with shiny, brand new shoes.