Delhi Riots Death Toll at 53, Here Are the Names of the Victims

The latest estimated death toll stands at 53, while official records peg it at 44. 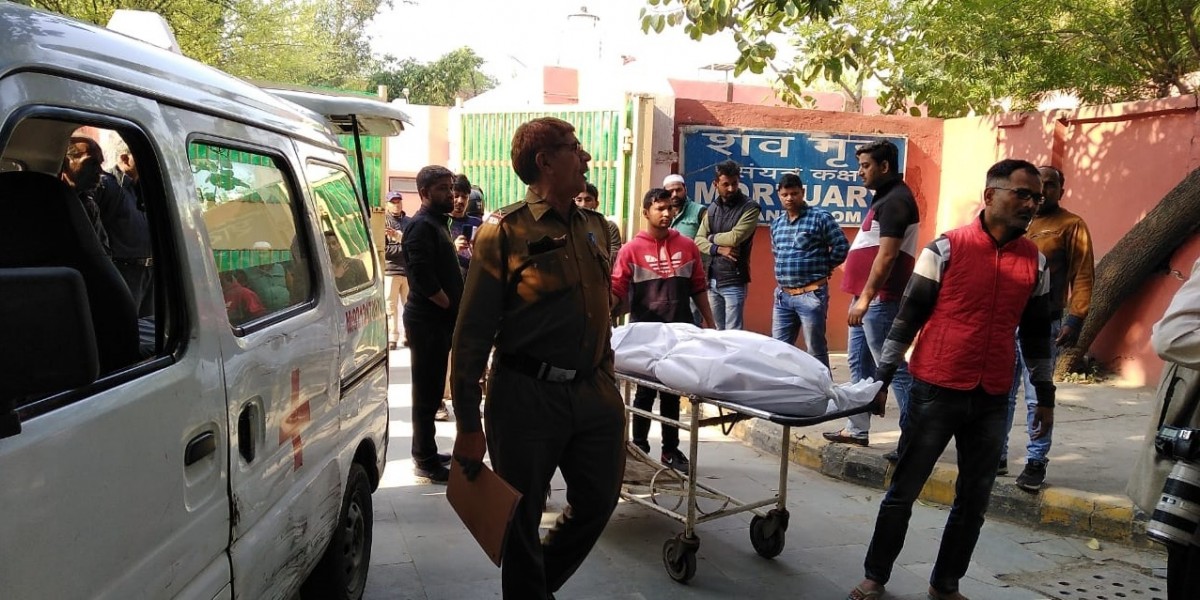 A body being taken home by family members at the GTB hospital near Shahdara on Wednesday. Photo: Dheeraj Mishra

Note: This list has been updated on July 15, 2020 with the list of names of the victims provided by the Delhi Police in an affidavit to the Delhi high court

New Delhi: Two auto-rickshaw drivers, a Delhi police cop, a man who works with the Intelligence Bureau and an 85-year-old woman are among the people who have been killed in the violence in North East Delhi since Sunday.

On March 8, Delhi Police confirmed that the death toll of the riots was 53. The latest victim was identified as Naresh Saini, a 32-year-old who succumbed to bullet injuries.

From a list released by GTB Hospital, reports by credible sources and a list curated by The Polis Project, The Wire has attempted to list the names of those who have died in the violence. The list will be updated and amended as more information comes in.

Apart from those killed, over 200 have sustained serious injuries due to gunshots, sharp-edged weapons, stone-pelting and even falls sustained from buildings during the violence.

Also Read: At GTB Hospital, Families of Delhi Riot Victims Wait for Bodies to Be Released

Those killed in the violence include:

1. Mubarak Hussain, a 28-year-old resident of Babarpur. He was shot in the chest at Vijay Park. A native of Darbhanga in Bihar, he worked as a labourer in Delhi.

2. Shahid Khan Alvi, 22 years. An autorickshaw driver, he was shot in the stomach near Bhajanpura dargah.

3. Mudassir Khan, also an autorickshaw driver and a resident of Kardampuri, he was also shot dead.

5. Mohammad Furquan, a 30-year-old was shot dead when he stepped out to buy food in Bhajanpura area of Jaffrabad.

6. Mehtab, 22 years, and a resident of Brijpuri was burnt to death.

8. Rahul Solanki, resident of Babu Nagar near Shiv Vihar and a civil engineer by profession, stepped out to buy milk when he was shot in the neck, killing him.

9. Ankit Sharma, a 26-year-old security assistant with the Intelligence Bureau was a resident of Khajuri Khas. His body was found in the Chandbagh drain, severely injured.

10. Vinod Kumar, 45 years, was also beaten to death in Brahmpuri when he was returning home.

12. Ashfaq Hussain, a 24-year-old electrician, was shot five times in Mustafabad. His body was kept at the Al Hind Hospital there.

16. Parvez, a 48-year-old from Maujpur, succumbed to gunshot wounds.

18. Rahul Thakur, a 23-year-old from Brijpuri, was killed in an “assault”, according to the hospital.

46. Zakir, a 24-year-old from Mustafabad who died of stab injuries.

47. Aqib, 18, died of a head injury inflicted while he was out to shop for his sister’s wedding in Bhajanpura.

Note: The following are the particulars of the 53 persons killed as per an affidavit filed by the Delhi Police in W.P (C) 566 of 2020: 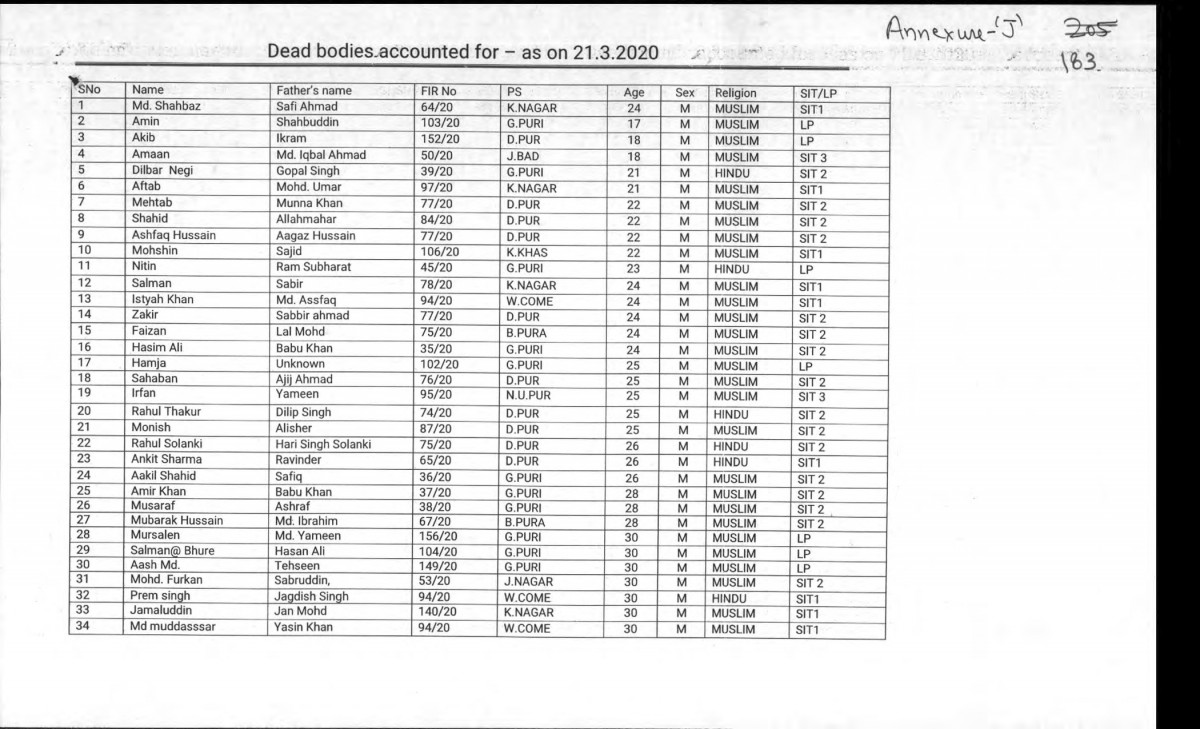 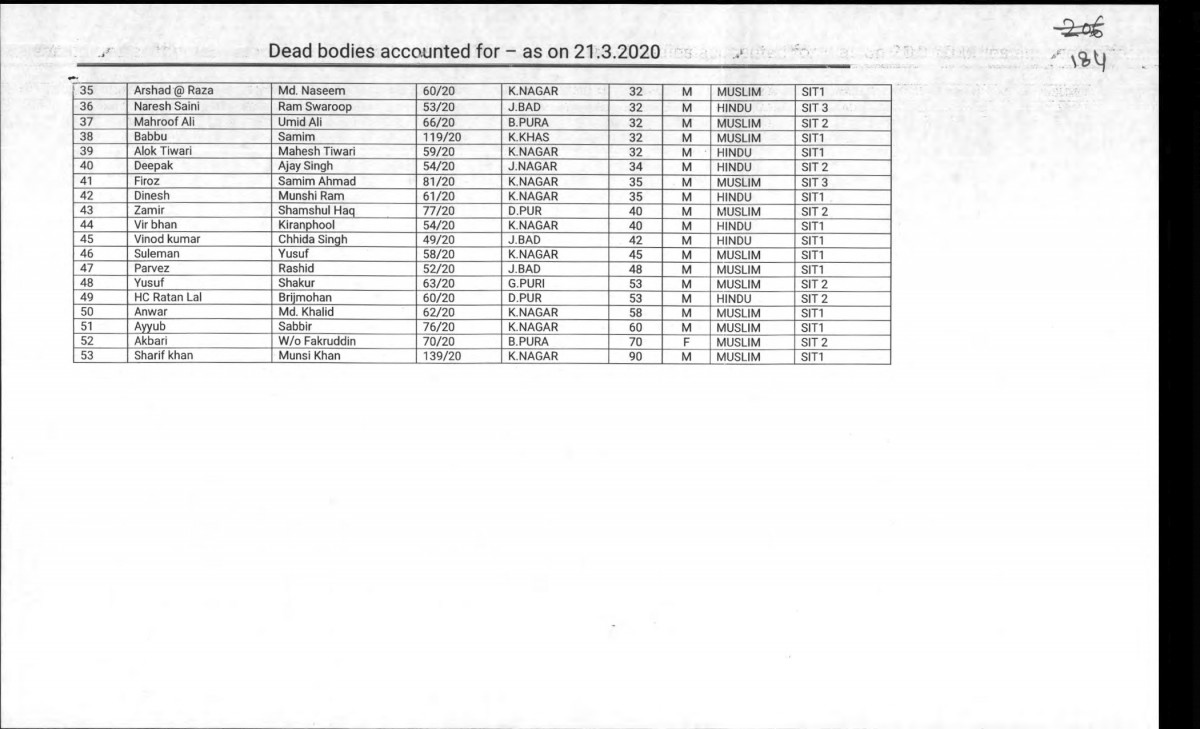