A photograph of her 15-year-old son holding a wicket while playing cricket is being used to allege that he participated in the riots, she said. 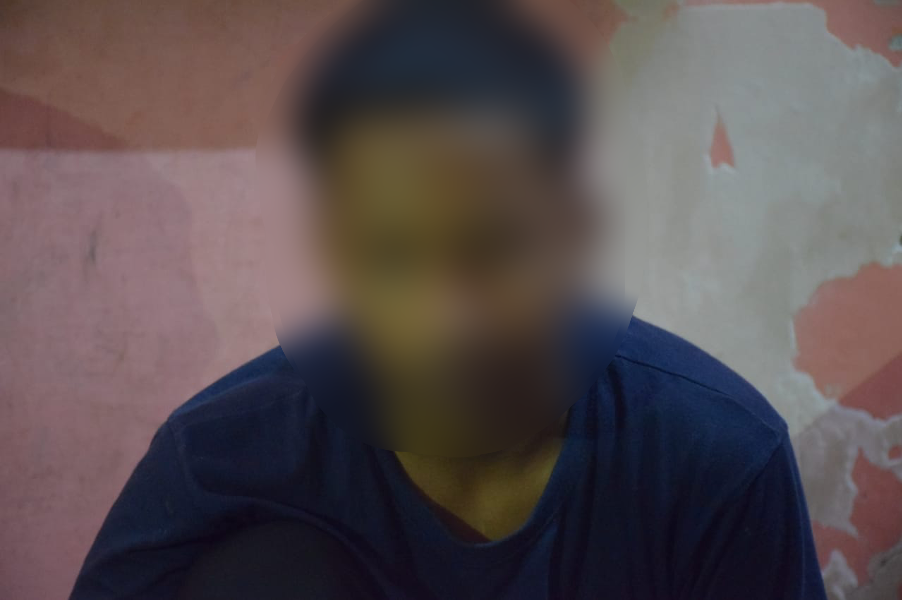 The 15-year-old boy allegedly being threatened by the police. Photo: Ismat Ara

New Delhi: A Muslim resident of Chand Bagh in North-East Delhi has accused the Delhi Police of threatening her 15-year-old son on Saturday. “It is because I filed complaints against them, they are settling personal scores,” she said.

The woman, AB, whose name is being withheld in accordance with section 74 of the Juvenile Justice Act as her minor child is “in conflict with the law”, told The Wire, “At around 3 pm [on Saturday], policemen had come to our house. Two of them were in civil clothes. My son opened the door. They showed him a photograph and asked him if he was in it. He said yes.”

AB’s son is a Class 11 student. The policemen, according to her, had a photograph of him while playing cricket. “He was holding one of the wickets in his hand. The policemen started accusing my son, who is still a child, of being a rioter,” she said, tearing up. The officers came from the Dayalpur police station, she said.

The police then pointed to another boy in the photograph. “My nephew was also in that photograph, also holding a wicket. They started asking my son to take them to his house. The children’s only mistake is that when the riots had started on February 24, they were out playing cricket. The police have made the wickets the target, calling them criminals for that.”

“Out of fear, my son told the police that I was not at home and came to my room to tell me about this. I told him to stay put in the room and not go anywhere, while I called my sister and told him about her son being asked for by the police. My sister came and talked to the police, trying to make them see sense, explaining to them that they were only playing cricket and not indulging in any kind of rioting,” she continued.

The policemen, however, were not ready to listen to AB’s sister, she alleged. “Tu zyada tez awaaz mein baat kar rahi hai? Abhi ruk jaa, lady constable bula ke teri g**nd tudwate hain (You are raising your voice with us? Just wait, we’ll have a lady constable come and beat you),” they allegedly said. According to AB, the police then sternly told her sister to bring her son to the Dayalpur police station at 5 pm, or else they will “put other charges on him and throw him inside the jail”.

Ved Prakash, SHO Dayalpuri, however, said no police officials had gone to AB’s house. “There is no cause for worry,” he told The Wire, when asked about the allegations she had made.

AB was an eyewitness as well as a victim in the Delhi riots, and has filed complaints against police officers and a Bharatiya Janata Party member.

She was more than three months pregnant when she was allegedly kicked in the stomach by a police officer. “I was in Yamuna Vihar when suddenly, riots broke out – tear gas was being released, people were being beaten left and right. ‘Jai Siya Ram’ slogans were being raised everywhere. I was unable to breathe due to my pregnancy.”

She claims to have seen police officials beating women and children at the Jaffrabad anti-Citizenship (Amendment) Act protest site. “I tried to save the children and other women from getting beaten up. I started vomiting because of the tear gas. I saw that they were tearing posters of B.R. Ambedkar; tasbeeh (rosary) and chapters from the Quran were being damaged. They even beat up old ammas (mothers) who were hiding inside thick blankets.” 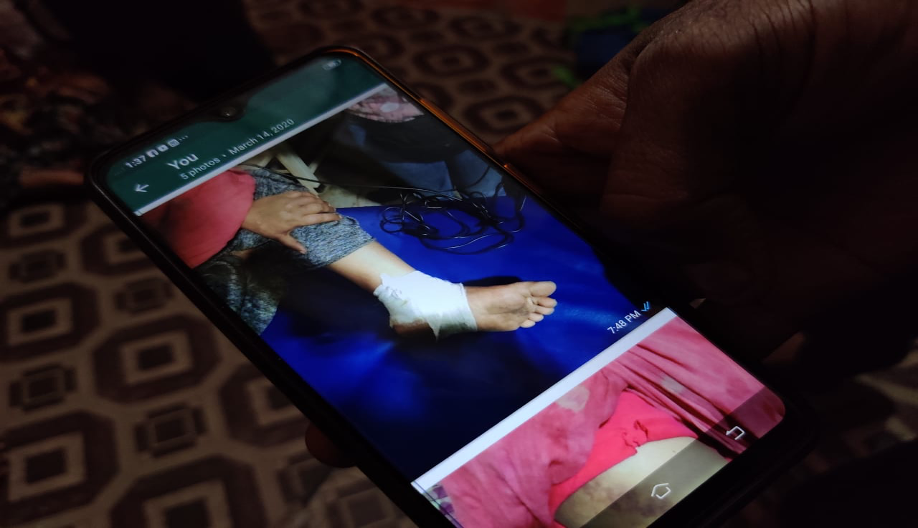 That’s when AB started thinking of ways to escape the violence, along with the elderly women. “They [the police] made a chain and stood around us, gheraoing us. They started beating me with a stick on my legs and my stomach. Only I know what I was going through – getting beaten up, with a life inside me. I even told them I was pregnant. Their response was, ‘You want azadi even during pregnancy? Take it from us.’” She also alleged that the police forced her to chant ‘Jai Siya Ram’, and when she refused, allegedly hit her on the head with a brick lying on the ground. She was severely injured that day, she told The Wire.

AB was taken to the Al-Hind Hospital in Mustafabad for first-aid treatment about five hours after she first sustained injuries. Her head was swollen and feet injured. Later, she was transferred to AIIMS and then GTB Hospital.

“Crime branch people came to me and asked me who the organisers of the protest were three days after the incident, and where the funding came from. I knew nothing, so I was told I am not cooperating with them. But how could I? I was like all the other women there – a normal protester with no funding or political backing.”

“Finally, I filed cases against Anuj Sharma [ACP Gokalpuri], SHO Dayalpur police station as well as Kapil Mishra,” she said. She filed a written complaint on March 19, which was received by the police. She accused the Delhi Police of not taking action on the basis of her complaint, and instead threatening her with legal action.

On July 24 and 25, AB alleged that strangers had come to her doorstep to threaten her and her husband, saying she should withdraw her complaint. Scared, she requested protection from the DCP Northeast Delhi, who she says refused. However, when she approached the Delhi high court about this, Amrit Prasad, counsel for the state, said that she should be provided with the SHO Dayalpur’s number, and she can message him if there’s an emergency.

A month later, she still feels “unsafe in my own house”, AB told The Wire.

She said she is scared only for her children, not herself. “I am a mother. Of course I am scared for my children. What if they pick up my son from the streets? Where will I go looking for him? I also have a young daughter. What if something happens to them? I demand protection for my children. I am living for my children. Just because I have filed complaints against the police, they are making me and my family a target.” AB said that her brother received a phone call from the police, asking him to bring her nephew to the police station on Sunday.