Delhi Police Affidavit Shows Muslims Bore Brunt of Riots, Silent on Who Targeted Them and Why

Three-quarters of those killed in the Delhi riots were Muslim, and the vast majority of homes and shops damaged in the violence belonged to Muslims too. A firefighter walks past damaged shops at the Gokalpuri tyre market after they were set on fire by a mob on February 24, 2020. Photo: Reuters/Adnan Abidi

New Delhi: A Delhi Police affidavit giving the most detailed government account yet of the communal violence which shook the capital’s north-east district in February this year has provided for the first time an official break-up by religion of the victims.

And though the Sangh parivar rumour-mill has consistently described the riots as ‘anti-Hindu’, the data makes it clear that Muslims bore the brunt of what was essentially targeted, organised violence.

The list of the dead provided in an annexure to the affidavit submitted to the Delhi high court on July 13 establishes that 77% of the civilians killed – 40 out of 52 – were Muslim while the remaining 23%, or 12, were Hindu. The 53rd victim was a policeman, head constable Ratan Lal, who died of gunshot wounds, and even if he is included in the list of Hindus, Muslims still make up three-quarters of those killed.

A separate annexure provides a Hindu-Muslim break-up of houses and shops destroyed. Here, even though its tabulation establishes that Muslims suffered greater losses, the Delhi Police appear to have deliberately undercounted the extent to which they were targeted.

For houses damaged, the police give the total number as 185, comprising 14 Hindu houses, 50 Muslim ones and zero ‘unknown’. This suggests that just 27% of the homes damaged or destroyed belonged to Muslims. But when the area-wise breakup is correctly added, the Muslim total rises from 50 to 90, i.e 48.6%. But even this is a gross undercount as the police has withheld the breakup for Khajuri Khas – where the single largest number of houses were destroyed (54) – and Karawal Nagar (23). Both are Hindu majority areas with Muslim pockets within them and it was the residents of those pockets who bore the brunt of the mobs. Assuming many if not most of the 41.6% houses belonging to the ‘unknown’ category are in fact Muslim houses, then it could be that 85-90% of the brunt was borne by Muslims. 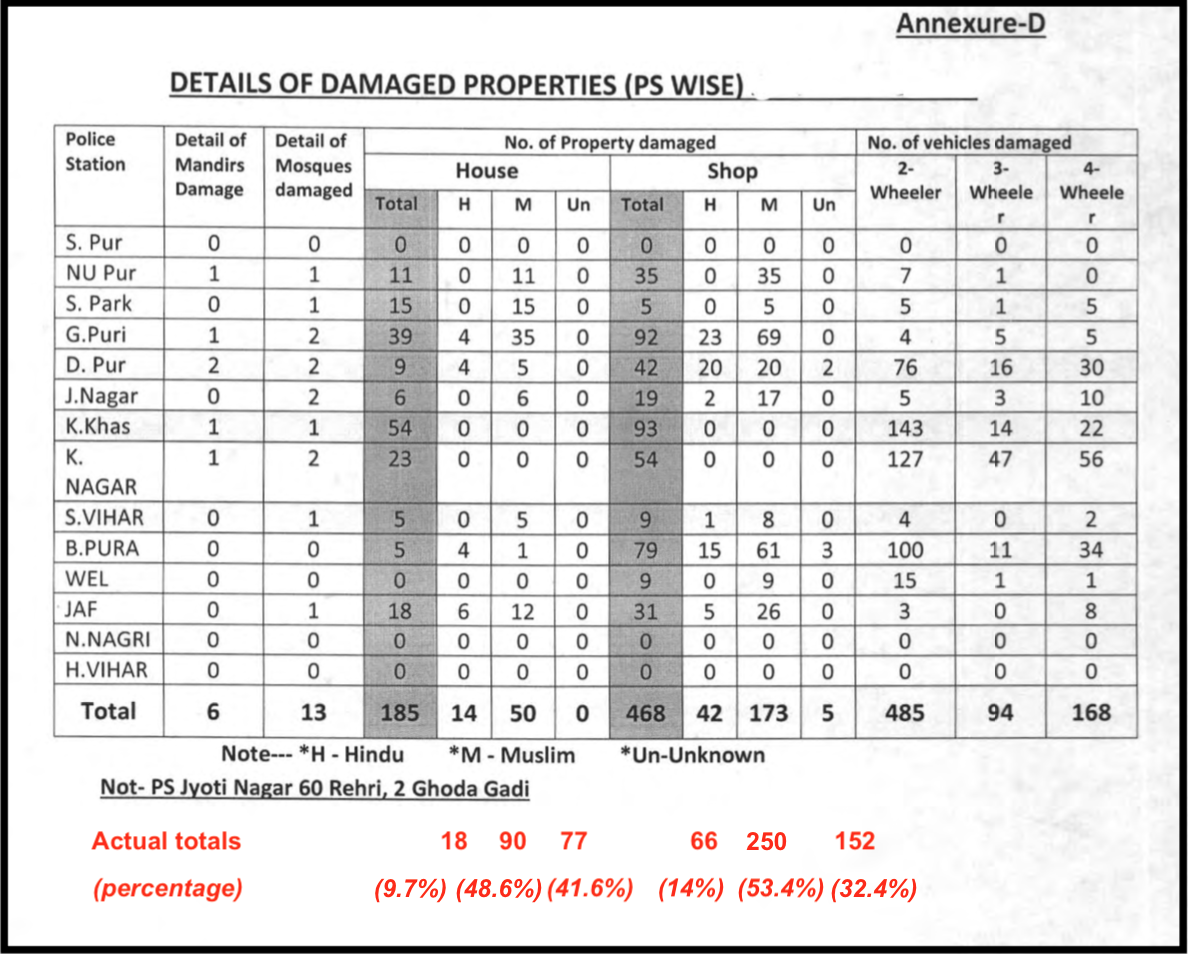 Official list of property damage in the Delhi Riots of February 2020. Source: Delhi Police Affidavit in WP(C) 566 of 2020. Figures in red added by The Wire

But even here, the police numbers seem an undercount. On March 3, the Eidgah relief camp  had around a thousand displaced Muslim men, women and children, mostly the poorest amongst those whose homes were damaged or destroyed. Even at 5 members to a family, that is 200 households. Many others had moved in with relatives or left Delhi.

The same pattern of undercounting is evident when it comes to the break-up of damage to shops. Again, the police are not able to add up the Hindu and Muslim columns properly.

Going by the neighbourhood-wise breakup, 14% of shops damaged belonged to Hindus and 53.4% to Muslims. But Khajuri Khas and Karawal Nagar have no religion-wise breakup, so “unknown” is 32.4%. Again, assuming the bulk of the ‘unknowns’ are Muslim, given the two localities and contemporary media reports, Muslims appear to have been the target for 80-85% of the attacks on shops and businesses.

However, the Delhi Police makes no note of the evidence of this targeting that is hiding in plain sight in its annexures because it runs counter to the thrust of its affidavit – that the riots were a conspiracy by the anti-Citizenship (Amendment) Act protesters to “execute a secessionist movement in the country by propagating an armed rebellion” in which “the anti-government feeling of Muslims, will be used at an appropriate time to destabilise the government.”

The Delhi police filed this affidavit in response to a clutch of petitions filed by Harsh Mander, Shaikh Mujtaba Farooq, Rahul Roy, Brinda Karat and others demanding, inter alia, that FIRs be registered against BJP politicians like Kapil Mishra and Anurag Thakur for inflammatory speeches in the run up to the February violence. “It is submitted that during the investigations conducted so far in all the aforesaid matter related to North-East Delhi riots no actionable evidence has surfaced yet indicating any role being played by [these] persons instigating and/or participating in the riots,” the police said.

Number of ‘temples damaged’ rises from two to six

Most curious of all is the figure of six for “temples damaged” and 13 for mosques, considering that in a reply to an RTI query last month, the Delhi Police itself gave the number of mosques/madrasas damaged as 11 and temples as only two. How the figure of two has now grown to six is not clear.

The targeted mob attacks on mosques, dargahs and madrasas during the riot had been widely documented in the media. Scroll.in provided details with photographs of 15 such places that had been burnt. On February 25, The Wire‘s reporters were witness to the burning of a mosque in Ashok Nagar and the planting of a Hanuman flag on top of its minaret. In contrast, there have been no reports of any Hindu temple sustaining serious damage.

While mobs pelted stones at the Gauri Shankar Mandir in Shiv Vihar and a Hanuman temple near the Rajdhani School which had been taken over by a mob was also briefly targeted, not even the pro-Hindutva media which devoted a lot of space to describing the violence as the ‘anti-Hindu Delhi riots’ has alleged that temples had been systematically targeted or damaged. One right-wing portal did claim that a Muslim mob had climbed atop a Shiv Mandir in Chand Bagh to throw stones but this was debunked by none other than the priest of the temple.

In a separate list of 473 civilians injured, the police have listed the name and father’s name of each of them. Though religion is not mentioned, going by the names, Hindus account for 216, or 45%, while Muslims account for 257, or 55%.

A total of 108 police personnel were also injured.

Police play up violence against Hindus in affidavit

Though the data contained in the annexures of the Delhi Police affidavit makes it clear that Muslim lives, homes, shops and places of worship bore the brunt of the violence seen across north-east Delhi in February, it is hard to reconcile that data with the affidavit’s structure and contents – which give no indication whatsoever that there had been any targeting of Muslims.

Curiously, the only individual victims it describes all happen to be Hindu. After stating that 473 civilians were injured in the riots, the affidavit says:

“It is shocking to note the following:

“An Intelligence Bureau officer Sh. Ankit Sharma was stabbed multiple times and his body was dumped in a large drain (nala). His dead body was found.

“A person was burnt alive and his body was found on the first floor of the building. Investigation have revealed that prior to being burnt he was brutally assaulted.”

The last case is a reference to the widely reported murder of a Hindu sweetshop employee, Dilbar Negi. Why Delhi Police felt the need to highlight his killing in the affidavit, or that of Ankit Sharma, over others that were also brutal is not clear.