The Committee on Welfare of Minorities of Delhi Assembly said negligence or error of judgment of verification teams should not affect award of compensation to victims.

New Delhi: The Committee on Welfare of Minorities of Delhi Assembly constituted in connection with the northeast Delhi riots, has, in its report, recommended the setting up of a new team comprising representatives from the office of the Divisional Commissioner, the Delhi Waqf Board and MLAs of affected constituencies to “conduct a physical survey” in cases where victims have complained of inadequate compensation or rejection of their claims.

The panel, chaired by Aam Aadmi Party MLA from Okhla, Amanatullah Khan, has submitted its report to the Delhi Legislative Assembly. The committee demanded that negligence or error of judgement on part of earlier verification teams “should not affect the proceedings of awarding due compensation to those who have been badly impacted in the riots”.

The Wire had earlier reported how a year after the riots many victims were still awaiting proper compensation.

As for the criminal cases filed in connection with the violence, the Committee said it wrote to the Principal Secretary (Home) seeking information on people detained, arrested or lodged in jail, copies of all the FIRs, details of persons booked under Unlawful Activities (Prevention) Act for their alleged involvement in protests against the Citizenship Amendment Act or National Register of Citizens and then the Delhi riots. The panel also asked for status reports on pending cases in which FIRs had not been filed.

The panel said it was told that a total of 754 FIRs were registered in more than 200 cases. However, it added that all these cases were “classified as sensitive” and that information on the first three points was denied saying, “Disclosure of any information pertaining to arrests/content of FIRs at this stage may hamper the investigation of these cases”.

The Committee, charged that “Delhi Police’s reluctance to share information seriously hampered the functioning of the Committee”. Chandbagh of Khajuri Khaas Chowk in the aftermath of the Delhi riots. Photo: Avichal Dubey

Khan said following the riots of February 2020, the Committee received “complaints of non-payment and inadequate compensation in lieu of the loss/ damage suffered by the victims during the riots”.

The Committee examined these issues in detail in over 10 meetings which were conducted between July 20, 2020 and January 18, 2021.

The panel recorded in the “genesis” of the report how “December 2019 witnessed protests in Delhi and various parts of the country against provisions of Citizenship Amendment Act and National Population Register which were perceived to be against the interests of some sections of the society.”

Thereafter, it said, “Amidst the tension in the country, on the eve of February 23, violence erupted, allegedly between anti-CAA and pro-CAA sections in the North East District of the National Capital.” The violence, it added, immediately took a communal turn resulting in the death of more than 50 people over the course of four days.

The report does not reflect on the fact that most victims were Muslims and on the partisan role of police both during the riots and in its investigation.

Also watch: Delhi 2020 | The Real Conspiracy, Episode 1: What the Delhi Police Chose Not to See

Stating that “hundreds were rendered homeless” and that victims ran away to protect themselves and their families, the panel said, hundreds of families were provided shelter in relief camps set up by Delhi government. It added that the government also “swung into action to provide relief and rehabilitation and ordered immediate payment of interim relief while also announcing compensation of Rs 2 lakh for major injuries, Rs 5 lakh for permanent incapacitation and death of a minor, and Rs 10 lakh for death of an adult.”

The panel said teams were formed to assess the property damage to compensate the victims “adequately”. 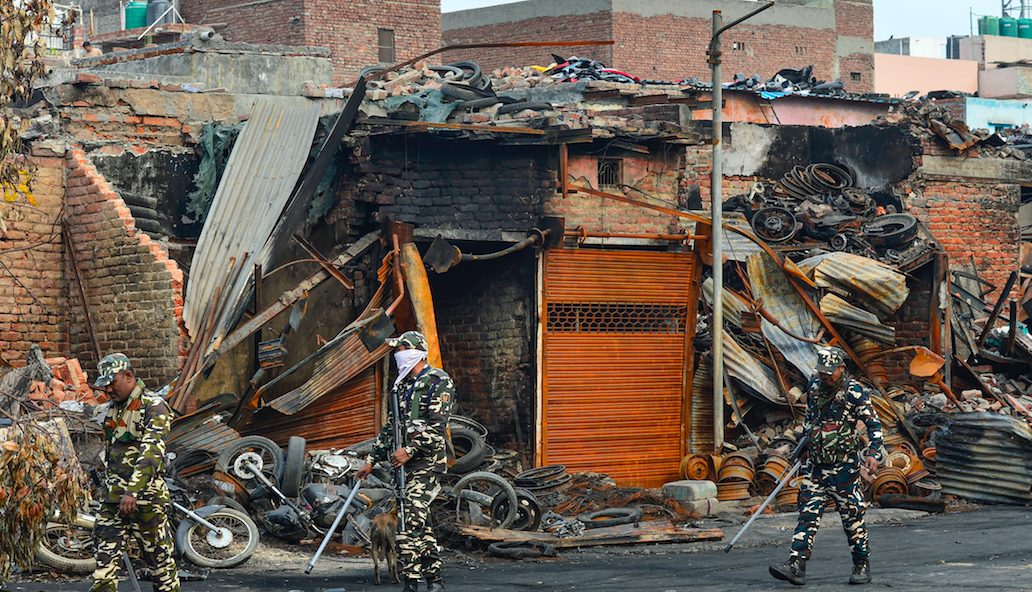 It admitted that due to the COVID-19 lockdown in March 2020, “The process of the disbursement of the compensation amount was affected.” Such cases, the panel said, were brought to its notice for redressal.

Thereafter, the Committee, through a letter on July 29, sought details of the compensation paid for loss or damage during the riots from Divisional Commissioner, Department of Revenue, and received information in this regard from the District Magistrate of North East Delhi on July 31.

This revealed that there were 53 applications for “death cases” of which 46 were “approved and fully paid” while seven were pending. Likewise, there were 372 injury cases of which 244 were paid, 118 were pending and 10 were rejected as they were duplicates.

There were also five applications of “damaged schools” of which three were paid and two were pending and 22 related to “damaged jhuggis” of which all were paid. 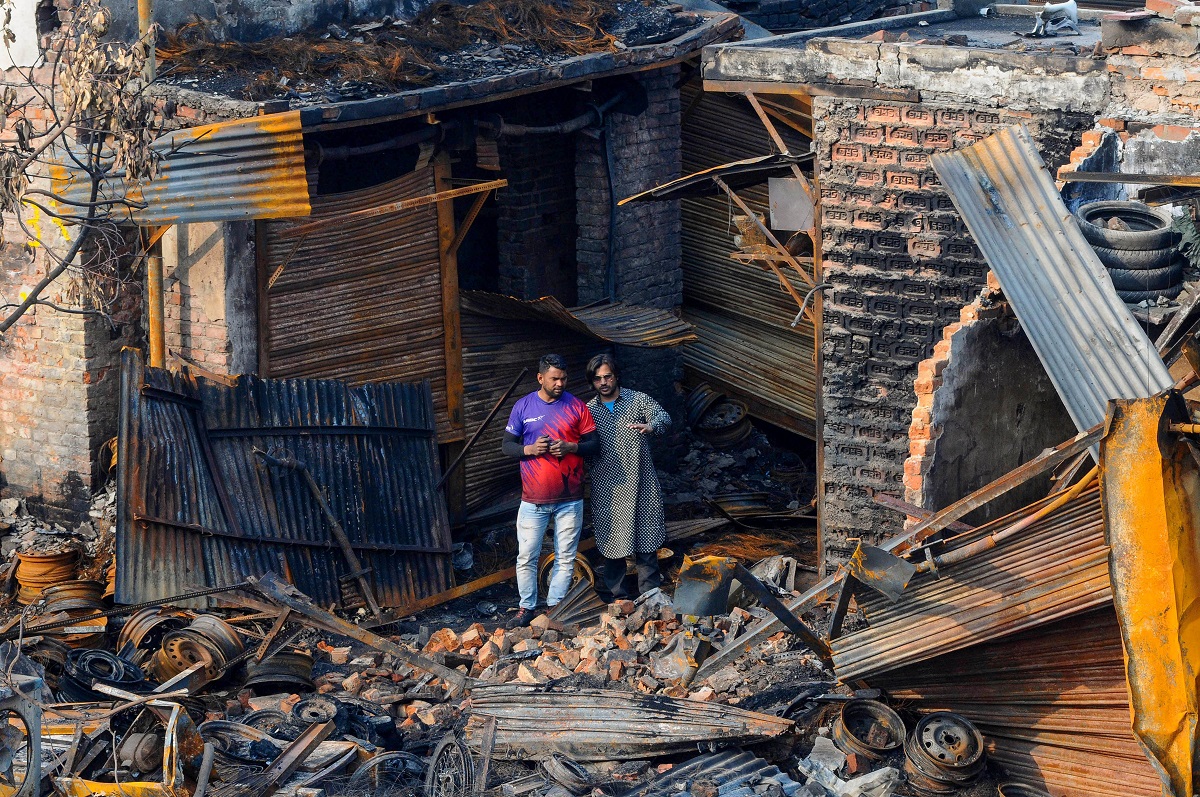 The panel said it was informed that the pendency of the applications was mainly due to the imposition of the lockdown and incomplete verification as the additional Sub Divisional Magistrate (SDM) deployed in the district returned to their original place of posting.

The Committee said it prioritised the seven pending death cases and following its intervention, six of these have been settled and “full and final compensation paid”. As for the one case left, it said, it has been put on hold by the concerned SDM due to a dispute in the family of the deceased. It said the pending injury cases were not processed because of incomplete assessment of the nature of injuries and their classification into minor, major or permanent incapacitation.

Assessment could not ascertain loss in many loot, vandalism cases

The Committee said a large of victims who were paid compensation said they were dissatisfied with the compensation amount as it was not in proportion to the losses incurred. It said there were instances like where a victim lost his right hand and two finders and was only paid Rs 20,000, sanctioned for ‘minor injuries’. A garment seller who was shot at and brutally beaten and lost his vision in one eye was likewise put into the ‘major injury’ category instead of ‘permanent incapacitation.’

After the panel raised these cases, the office of the Divisional Commissioner agreed to review them on priority. The Committee acknowledged that in “many cases” of loot and vandalism the applications were rejected as the assessment team could not ascertain the occurrence of damage.

A total of 218 such complaints received by Delhi Waqf Board for reassessment were forwarded by the Committee to the office of the office of the Divisional Commissioner. On not getting satisfactory response, the Committee asked its member and Mustafabad MLA Haji Yunus to visit and physically verify the extent of damage in these cases. Yunus then presented before the panel a list of such cases with the evidence in the form of videos and photographs documenting the extent of loss or damage to property. This evidence was again shared with the Divisional Commission for reassessment on priority. The Committee also asked the Department of Health to reassess cases where it was claimed that the compensation was not commensurate with the nature of injuries. It responded saying that 35 patients were received at GTB Hospital, of whom 29 were brought dead and 14 expired during treatment. Of the remaining 322, injury reports for 290 were finalised and forwarded to the area DM/SDM for consideration of compensation. As such, it said, only 32 cases were pending at the hospital “for want of recall of the patient for re-examination”.

By January 18, 2021, the panel said the disbursement of compensation was Rs 26,09,78,416 and of the 3,425 complaints, 2,221 were approved, none was pending while 1,179 were rejected. It said there were four cases of residential property, 18 of commercial property and three of animal business and rickshaws being reopened.