A joint report by several rights groups has identified numerous instances of violence by Hindutva groups against minorities in the state and the police's reluctance to apprehend the offenders. 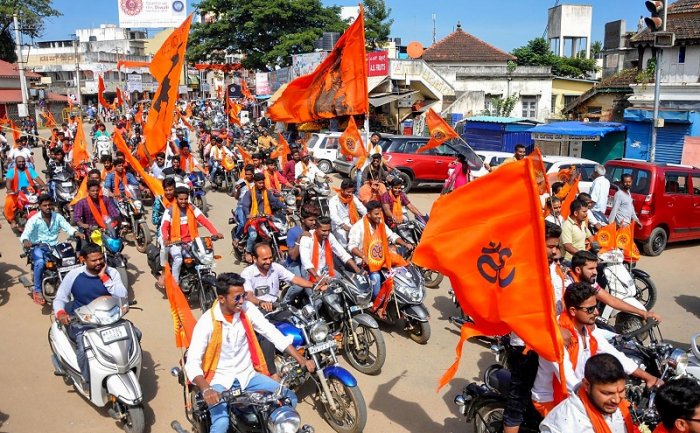 Mangaluru: On January 3 this year, in the coastal town of Mangaluru, an aggressive campaign against Muslim men selling fruits and vegetables took off on social media. The messages, circulated on various social media platforms, warned Hindus against buying anything from roadside stalls operated by Beary (a local word for Muslims) as the products were “deliberately laced with poison to kill Hindus”. This entire operation, the series of messages claimed, was being “financed by China”.

A few days later in the same district, a few men – all belonging to the Rashtriya Swayamsevak Sangh (RSS) – barged into a birthday party being held at a café in Mangaluru’s Puttur area, claiming that boys and girls of different religious communities were partying together. The police intervened, but only to take the students to the police station. They were eventually sent home.

In another case from August this year, a few men belonging to the ultra right-wing organisation, the Bajrang Dal, created a ruckus in a bus in which two girls were travelling to Puttur from Bengaluru for work. A youth belonging to Muslim community was seated behind the girls and according to the Bajrang Dal members, he was chatting with the girls on the phone. The youth’s mobile was snatched and he was prevented from alighting from the bus.

The police were eventually informed but, once again, it was the Muslim youth who was subjected to scrutiny. His mobile phone was checked and when no messages were found on his phone, he was allowed to leave.

There incidents are emblematic of the  economic boycott, enforced social segregation and communal hatred that is underway in the coastal Dakshina Kannada district of Karnataka. But what’s more worrying is the police inaction and the impunity with which right-wing organisations are allowed to spread their terror in the region.

The People’s Union for Civil Liberties, Karnataka (PUCL-K), All India Lawyers Association for Justice (AILAJ), All India People’s Forum (AIPF) and Gaurilankeshnews.com have recently published a report in which they have identified at least 71 instances of communal discord, all attracting criminal charges, in the eight-month period staring January this year.

Activists Shabeer Ahamed and Vidya Dinkar (left most) and Maitreyi Krishnan (fourth from right) at the release of the report. Photo: Sukanya Shanta/The Wire.

These cases, laboriously compiled and verified by the rights organisations, expose a pattern of growing communal intolerance in the region. Well-known activist Shabeer Ahamed, who was part of the fact-finding team said that a new case of communal violence and intimidation is being reported in the region almost every day.

Maitreyi Krishnan, a Bengaluru-based lawyer and the lead researcher on the report said in most cases, the police have avoided taking police action since “the complainant was not willing to come forward”.

Along with Krishnan, Manavi Atri of the PUCL, Swathi Seshadri of the AIPF, Shashank S. R. of Gauri Lankesh News and Manu Choudhary, a women’s rights activist, were also involved in the research.

The report has identified six trends that have emerged from the recent incidents in the region. The cases have been classified under the following categories: enforcing social segregation; determining and dictating intimacies; economic boycott; attacks in the name of gau raksha (cattle protection); attacks on social, economic and cultural rights of minorities and curbing religious freedom and hate speech.

The 71 cases identified in the report, Krishnan said, were those reported in the media. “There certainly are a lot more,” she added. Of them, the team has closely analysed 12 cases, touching upon the identified categories.

The report, titled, ‘From communal policing to hate crimes: the attack on Ambedkar’s dream of fraternity’, observes that, “Hindutva organisations, with the overt and covert support of the state machinery, especially with the present dispensation in power, runs a concerted campaign to ensure the social segregation of, particularly Muslims, from the rest of society.” This, the researchers have found, is done “through criminal actions aimed at preventing all forms of social interactions between Muslims and Hindus.”

The decision to carry out a fact finding exercise in the region was taken following a dramatic increase in the number of reported cases of communal violence at the start of the year. These cases, the report says, have led to “the normalisation of Hindu majoritarianism” which has “come to fruition through the disempowerment of Muslims and the undermining of their status as equal citizens”. The effect of the increasing communal incidents, the report observes, is the dismantling of the notion of fraternity and the entrenching of social segregation.

The release of the report was organised amid heavy presence of police. Police team were deputed at the venue. Senior social activist Vidya Dinkar, in the press briefing mentioned that finding a venue for the event was not easy.

Police presence at the venue where the report was first released. Photo: Sukanya Shanta/The Wire.

The state administration’s passive approach, coupled with government support has made Hindutva organisations thrive in the region. Karnataka chief minister Basavaraj Bommai, ostensibly justifying the rise in communal hate crimes and communal policing, made a disturbing statement: “There are many sentiments in the society. We should all behave in a manner that would not hurt these sentiments. When these sentiments are hurt, actions and reactions are elicited. Along with government’s responsibility of maintaining law and order, we have to also ensure societal unity. For this, everyone should cooperate. The youth also should ensure the sentiments are not hurt. This is a societal issue. There has to be morality in society, right? When the morality is forgotten, action and reactions are elicited,” he had told reporters.

This statement, the report points out, showed the chief minister’s “tacit encouragement to the nature of the problem where fundamentalist forces have been allowed to implement their Hindutva agenda unhindered by any notion of rule of law”.

The compilation of cases also includes an incident involving minor boys who had attacked a Masjid in the Surathkal area in April this year. Upon finding incriminating CCTV footage of the boys, the police questioned them on their reason for attacking the Masjid. In response, the boys reportedly said that the Masjid was 50 metres away from a Ganapati temple and that while the temple had only one floor, the Masjid had two. The fact that the Masjid was at a higher level than the temple, the boys said, “angered them”.

With their increased persecution at the hands of Hindutva organisations, some cases involving Muslim men were also reported in the region. The police in these cases, the report points out, acted very differently. For instance, when some members of the Muslim community threatened two Hindu youths for interacting with a Muslim woman, a complaint was registered and the police promptly arrested them. Such promptness, however, was not shown when handling perpetrators from the Hindu community. Religious identity has become the sole factor in police action, the report observed.

Muslims are not the only ones that get targeted in the coastal district; the Dalit community, too, is often at the receiving end of communal violence. Most of these attacks, the report observes, are committed in the name of cow protection. This trend, the rights organisations claim, was bolstered in the past year by the passing of the Karnataka Prevention of Slaughter and Preservation of Cattle Bill, 2020, which stepped up the severity of the punishment for killing cattle from the 1964 legislation of the same name.

Also read: Karnataka Anti-slaughter Law Neither Protects Cows, Nor the Poor Who Tend to Them

While there has been a dramatic rise nation-wide in the brutal violence perpetrated by Hindutva organisations under the guise of cow protection since 2014, in Karnataka, it began much earlier.  The PUCL-Karnataka documented 44 incidents of violence by vigilante elements pertaining to the transportation of cattle and eating of beef from 1998 to July, 2012. In the past decade, the cases have only multiplied.

Despite the increase in number, the modus operandi, the report points out, has remained more or less the same. “The Hindutva supremacist groups receive ‘information’ or are ‘suspicious’ of cattle theft, cow slaughter or cattle transportation. More often than not, this assault is in the presence of the police who were informed by these groups beforehand. The police thereafter inevitably arrests the victims and charges them under the provisions of the Karnataka Prevention of Cow Slaughter and Cattle Preservation Act, 1964,” the report observes.