Senior advocate Prashant Bhushan has demanded the registration of an FIR against Manish Chandela for arson and for spreading hatred against the Rohingya. 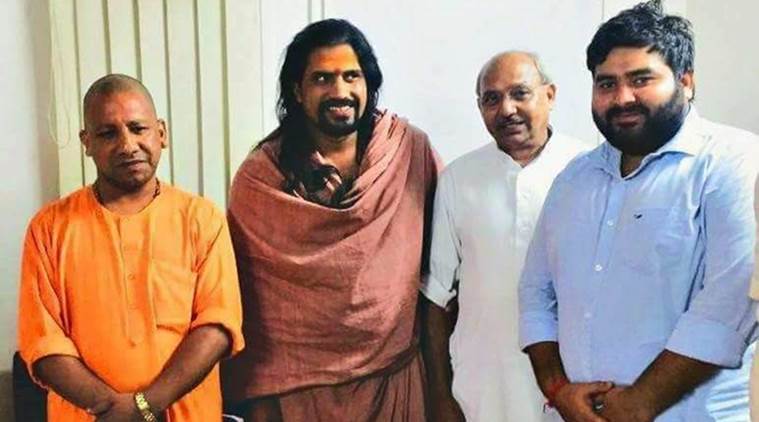 New Delhi: The Delhi police has handed over the complaint by senior advocate Prashant Bhushan against BJP youth-wing leader Manish Chandela alleging that he had “set fire” to the Rohingya refugee camp in Delhi last week to its cyber crime cell. On April 15, a camp in south Delhi’s Madanpur Khadar was burnt to ashes, rendering over 200 homeless.

The police, however, are yet to make any arrests in the case.

The Delhi police have handed over the investigation into the burning down of a Rohingya refugee camp in Delhi’s Madanpur Khadar last week that rendered over 200 homeless to its cyber crime cell. A complaint was filed by senior advocate Prashant Bhushan on April 19 against a BJP youth-wing leader, Manish Chandela, alleging that he had “set fire” to the camp. However, the police are yet to make any arrests in the case.

In his complaint to the Delhi police, Bhushan had on April 19 sought registration of a first information report against Chandela, member of the Bharatiya Janata Yuva Morcha, on the grounds that he had “admitted his criminality in having set fire to the Rohingya camp in Delhi, had threatened in another tweet to “do it again” and that his tweets were “intended to incite communal hatred and create a disturbance to public peace and tranquillity.”

Bhushan had noted in his complaint sent to the station house officer of Tilak Marg police station that Chandela used the Twitter handle @chandela_BJYM where he describes himself as a “Hindu nationalist Gurjar Leader”. 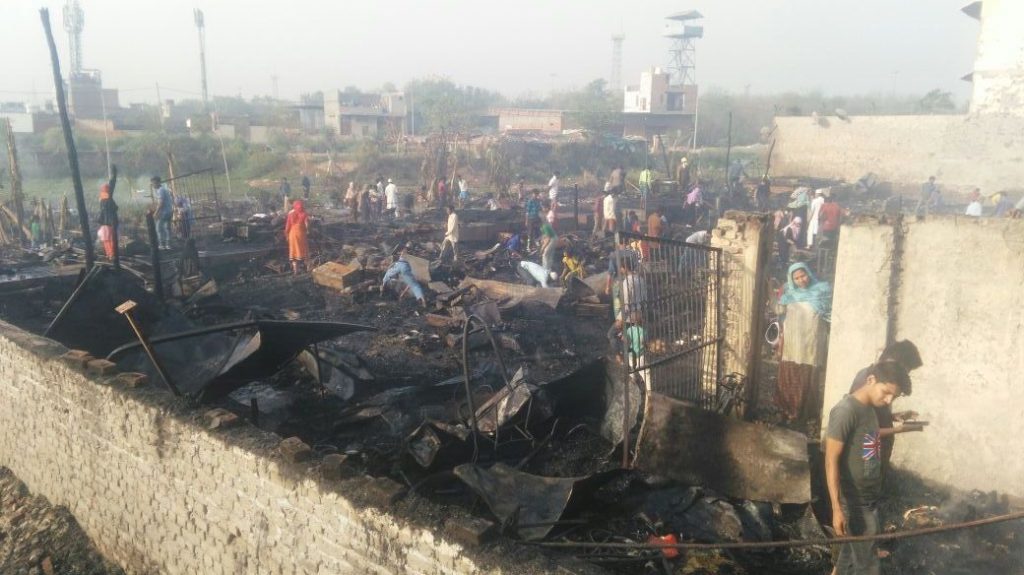 Residents of the camp in Madanpur Khadar said they lost everything in the massive fire. Credit: Special arrangement

Noting that as per media reports, the Rohingya refugee camp in Madanpur Khadar had caught fire around 3:30 am on April 15 and that the whole camp was burnt and razed to the ground, the senior advocate said while “the cause of this fire was unknown”, in various tweets Chandela admitted to having “set fire” to the camp.

Providing the screenshots from Chandela’s tweets and re-tweets along with the complaint, Bhushan said :“the tweet in which he claims to have set fire to the camp has been deleted from his profile but has been retrieved from an archive”.

Following the complaint, Bhushan had expressed dismay at the delay in arrest of the accused and also questioned the BJP for not acting against Chandela in the matter.

My criminal complaint against Manish Chandela of BJYM who proudly boasted on social media that he & his associates burnt down the Rohingya camp. No action yet by @DelhiPolice to register case & arrest him & no action by BJP to remove him from party. State of rule of law under BJP pic.twitter.com/aVd8LDSCUO

Meanwhile, the chief spokesperson of Delhi police Dependra Pathak has gone on record stating that action would be taken once the investigators established the source of the tweets. The Wire is still awaiting a reply from Pathak on whether the police has been able to contact and question Chandela and what action has been taken against him. The story will be updated based on the response.

In his complaint, Bhushan had provided a vivid account of how Chandela had admitted to his involvement in the fire. He said when a person tweeted his concern at the fire, Chandela commented on it, “Well done by our heroes”. Further, when someone else asked him in the same thread, “well done for what”, Chandela replied, “Yes, we burnt the houses of the Rohingya terrorists”.

The following day, on April 16, Bhushan said Chandela again tweeted with the hashtag “Rohingya quit India” that “yes we did, and we do it again”.

Bhushan said Chandela also retweeted a statement put out by one S. Menon on April 15 in the wake of the fire stating that the deportation of the Rohingya was now a matter of “urgency” and suggested that the refugees belonging to the community had committed the Kathua atrocity in order to change the demographic character of Jammu.

On March 17, Bhushan said Chandela tweeted again, this time saying: “Inform us about Rohingyas staying in illegal settlements anywhere in India. We will send them where they really should be”.

He charged that Chanderal was clearly “guilty of serious offences under various sections of the Indian Penal Code” and therefore urgent registration of an FIR. Moreover, he said, “in claiming that he set fire to the Rohingya refugee camp, he is guilty of causing mischief by fire or explosive substance with the intent to damage property, destruction of building used as a human dwelling, etc.”

Bhushan said the FIR should be registered against Chandela “so that he may be prevented from using social media as a tool for fanning communal hatred, hostility and potential violence by spreading rumours and misinformation targeted at the Rohingyas”.

“The after-effects of such fake news peddling has far-reaching consequences especially in the context of the Rohingya community, they being on the complete margins of society and living in deplorable and subhuman conditions in camps in many parts of the country,” he had cautioned.

Meanwhile, BJYM president Sunil Yadav denied that Chandela was a member of either the BJP or its youth wing. He claimed that the complaint was only an attempt by Bhushan to malign the youth wing.

He also tweeted that it was an attempt to promote the agenda of saffron terror.

[1/2] As BJYM Delhi President, I confirm that #ManishChandela is not a BJP/BJYM worker but many people are trying hard to use his tweet to malign the image of BJYM and to propagate their fake agenda of “#SaffronTerror“.

Subsequently, Yadav claimed that he had also filed a complaint with Delhi Police commissioner to probe the attempt by some people to malign his organisation after Manish Chandela’s tweets.

Delhi BJP spokesperson Harish Khurana in the meantime tweeted that Chandela was in fact a member of INLO, the student wing of Indian National Lok Dal.

1 more lie exposed of @pbhushan1 .He filed a complaint against @BJP4India claiming Manish is @BJYM member &he admitted that this man has burnt Rohingya camp in Delhi.
But fact is he is INSO member(INLD student wing)
What a shame ?Series of conspiracy to defame @narendramodi govt. pic.twitter.com/FalEcpPUWE

The article was updated on April 22 with reactions of BJP leaders.