Has communal hatred seeped into the Bengali-speaking middle class psyche? 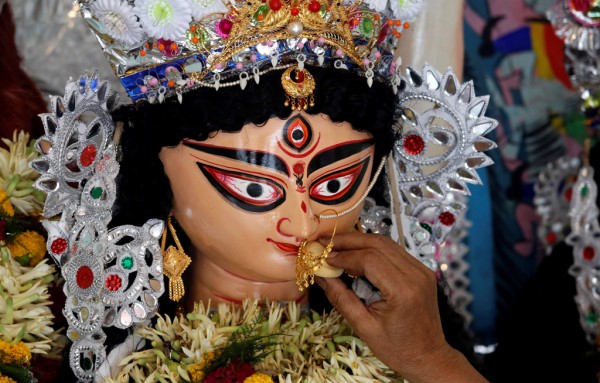 Kolkata: Durga puja is the most popular festival in West Bengal. Politicians of all hues usually suspend their mutual bickering and agitations mid-autumn and focus on public relations in and around puja pandals. Among the traditional rivals, nationalists of the Congress and the ruling Trinamool Congress (TMC) variety flex their political and financial muscles to put on ostentatious pujas in their paras (neighbourhoods). The old-styled competitive extortion of chanda (donation) has now largely been replaced by contests over corporate sponsorship in Bengal’s big towns. The Left leaders enjoy inhaling this especially aromatic opium of the masses, but prefer to hang up their boots for a while and man makeshift stalls selling Marxist literature close to the pandals.

This usual seasonal peaceful coexistence is likely to be shattered this time around as the modified BJP is all set to play bull in the china shop. The BJP opposed the decision by Bengal chief minister Mamata Banerjee to disallow Durga idol immersions from the late hours of Vijaya Dashami (Dussehra in other states) till the next day, Ekadashi, which coincides with Muharram.

Banerjee and her top police officers have justified the administrative order on grounds that the government wants to preempt any clash between the routes of immersion and Muharram processions, and avoid any law and order problems. The BJP and the rest of the Sangh parivar has been quick to call this another example of Banerjee’s “appeasement of Muslims” at the cost of Hindu rites, and are threatening to violate the order. The Calcutta high court on Thursday cancelled the West Bengal government’s decision to restrict the immersions.

Another point of simmering showdown is the Bengal government’s decision to ban the public display of weapons on Vijaya Dashami in the wake of the Sangh’s show of Hindu might by brandishing swords and daggers at the Ram Navami and Hanuman Jayanti rallies earlier this year. The saffron camp has planned to defy the order, citing the government’s permission to Muslims to carry traditional weapons in Muharram processions, and demanding the same right be given to the Hindu majority.

The tussle over idol immersion has reached the Calcutta high court but both sides seem adamant on fighting it out on the streets. The court’s observation citing the example of the Mumbai police allowing Hindu and Muslim religious processions on the same day has emboldened the saffron side, while the state government has dismissed this as a recipe for disaster considering the spate of riots in that city. 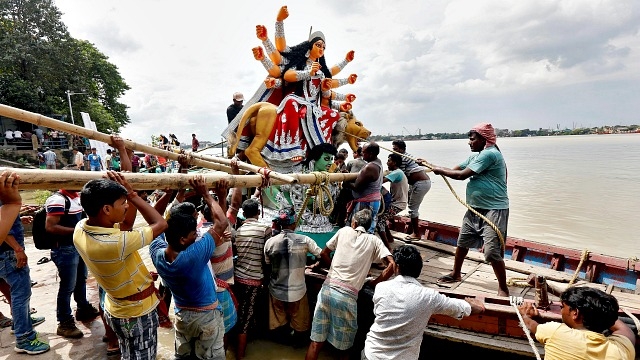 The rise of the fringe

Most Hindus in Bengal will vouch for the fact that hardly any baroari or community puja organisers go to immerse the idols on Dashami, except families who manage barir puja (household worshiping). For the dadas presiding over para pujas and common revelers, extra party time is more than welcome.

Unlike the Hindi heartland, shastro puja or worshiping of weapons and burning of Ravana’s effigy on Dashami are not part of Hindu rituals in Bengal. For traditional Hindu Bengalis, the day is marked more by sadness over a beloved daughter’s departure with her children after a joyous but short stay at her parents’ home, than by the celebration of Rama’s victory over Ravana.

Bengal’s post-immersion rituals of kolakuli (embracing of friends) and pranam (touching elders’ feet) in a spirit of family and community togetherness are widely different from the spectacular burning of the mythological demon king’s effigy in north India, where Ravana has moved on from being ‘the demon within’ to the epitome of a historical enemy of Hindus.

Although Durga puja is essentially a Hindu festival, Muslims in Bengal have by and large participated in it for generations, both for economic and social reasons. Despite being one of the original homes to Hindu nationalism and Muslim separatism of the bhadrolok and ashraf varieties, Bengal’s social milieu, nurtured by Bhakti-Sufi syncretism of the medieval period and the modern humanist and left-liberal ethos, has so far survived the ugliest communal riots and Partition horrors. Its postcolonial history of political violence has hardly had a religious hue. The battles of bullets and ballots for power were never fought in the name of Ram or Rahim. But this is not the case anymore.

The BJP’s fast emergence as the main opposition to the ruling TMC at the cost of the Left and Congress is changing the political rhetoric and social mobilisation. If the Left and the Congress had chosen to overlook the ominous signs of communalisation of popular minds since the demolition of the Babri mosque in 1992, they witnessed the making of further inroads by Hindutva forces following the post-Godhra pogrom in Gujarat a decade after. The spread of hatred was not limited to Hindi-speaking working people and business communities – its seepage into the Bengali-speaking middle class psyche became unmistakable.

Also read: If Only Durga Could Slay the Asura of Politicking

Today, after the arrival of Prime Minister Narendra Modi on Raisina Hill, the mutual brinkmanship of Left-Congress and TMC is further facilitating the occupation of the political as well as social centre-stage by the hitherto fringe forces. The former fort of the left-liberals appears to be crumbling before the charioteers of the Aswamedh Jaggya, with the BJP’s vote share increasing to 17% in 2014 and it winning three assembly seats in Bengal in 2016.

Despite a decrease in its vote share to 10% last year, its recent emergence as runner-up to the TMC in an assembly by-election in Kanthi Dakshin, close to Nandigram, has underlined the steep rise in its poll fortunes. The secretive Sangh’s presence in the state has increased manifold and this is now evident from its increasingly belligerent mobilisation.

Amit Shah’s goal of bagging Bengal in 2019 would not have rattled anyone except the BJP’s rivals had his blue-print for the D-day not revealed the madness of the method. Riots have proved to be the most tested tool for communal polarisation for political ends even before India became independent. It is now increasingly apparent that the party wants a repeat of post-Muzaffarnagar Uttar Pradesh, if not Gujarat, in Bengal.

With panchayat polls round the corner, rousing Hindu sentiments over Durga puja will be convenient for Shah’s goal of majoritarian consolidation, as the issue has gained currency since last year. In this context, Banerjee’s latest decision has appeared to be a godsend for him as her administration prevented idol immersion for a day last year too. This led to legal wrangling as well as communal flare-ups in Hajinagar and Chandannagore in the Kolkata suburbs.

The flare-ups were not area-specific as subsequent months proved. Bengal is fast becoming a communal cauldron as religious strife engulfed several other areas since last year, from Kaliachak in North Bengal’s Maldah in January to Howrah’s Dhulagarh in December, as well as Baduria-Basirhat in North 24 Parganas this July. Nakasipara in Nadia is now convulsing under communal tension. 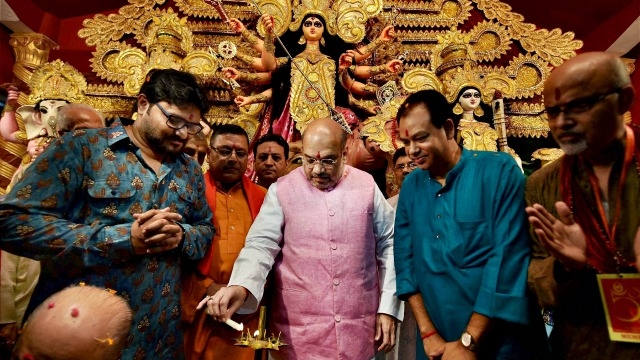 Recent riots have revealed the increasing influence of fundamentalist hawks among Muslims in Bengal who are inciting community youth to vent their pent up anger against the countrywide Hindutva rampage against the minority and to fight back on the streets to ‘save the honour of Islam’. Though saner voices among the community’s clerics in Bengal have warned against falling into the Hindutva trap, their failure to reach out to the youth, who are vulnerable to social media disinformation and provocations, has created room for rabble-rousers.

The role of the administration and police during successive riots has only reinforced the Sangh campaign and general Hindu perception of the TMC being partisan towards Muslims.

Muslims comprise more than 27% of Bengal’s population, though only three of the state’s 23 districts have Muslim majorities. The minority holds the key to at least 60 assembly seats, of which the TMC bagged 32 in 2016 while 18 went to the Congress and the rest to the Left Front.

This was crucial for Banerjee’s overwhelming majority in the house, in addition to her relentless poaching into Left and Congress legislative parties through a ruthless carrot and stick policy, even after garnering 211 seats out of 294 in the assembly.

Her vow to protect constitutional secularism and the syncretic tradition of Bengal notwithstanding, Banerjee’s realpolitik motives are clear from her choice of mostly orthodox males as minority representatives, both in her government and the party. They include a loudmouth fatwa-giving shahi Imam in Kolkata, now fallen from grace, or MPs who were either instrumental in fanning street violence in Kolkata while demanding the ouster of feminist writer Taslima Nasreen or in opposing Pulse Polio immunisation as an American conspiracy to depopulate Muslims during Left rule.

The TMC’s earlier public support to the right of Muslim males to instant triple talaq, and its silence over the Supreme Court’s recent ban on it, speaks volume about Banerjee’s social-political imperatives. Her refusal to rein in her minister and Jamat leader Siddiqullah Choudhury’s open defiance to the SC order has left no room for doubts.

Also read: Why Is the BJP Communalising West Bengal Instead of Offering It Good Governance?

Banerjee’s penchant for symbolism like public prayer in Muslim style and tokenism like allowance for mosque imams, has been aimed at wooing conservative male opinion without caring for substantial and long-term welfare, as many community insiders have felt. Almost none of her chosen people are from the emerging educated middle class within the community. Despite the visible regeneration of the middle class, which had depleted its rank following the migration of a large number of its members after Partition, it hardly enjoys political representation under the current dispensation.

During the Basirhat violence, Banerjee obliquely chided the zealots among Muslim religious and political leaders for overreacting to the ‘fakebook’ hate campaign against Islam that landed her in trouble at the height of the BJP’s campaign for president’s rule and triggered her spat with the governor on the breakdown of law and order. Earlier, she had cautioned two of her Howrah MLAs whose factional feuds had facilitated communal violence in Dhulagarh over the extension of the route for a procession in celebration of the prophet’s birthday last year.

But Banerjee kept mum against such hotheads at her annual party rally on July 21 and thereafter. Evidently, she does not want to chastise minority hawks, at least in public, fearing the loss of a crucial chunk of the community’s votes. Her public recitation of Sanskrit hymns, and celebration of Hanuman Jayanti and Ganesh Chaturthi by her colleagues this year are aimed at taking the wind out of Sangh’s sail. But it remains to be seen whether her balancing act will work at the hustings.

In the meantime, the land of Rabindranath Tagore and Nazrul Islam is heading for a further face-off between the politics of competitive communalism. This puja may be the beginning of the next round.

Biswajit Roy is a senior journalist.