Ramanathan of the RSSS, which the RSS has clarified has no connection to it, has been making threats to Hindu artists, whom he calls 'chameleons', and warning them to not sing Christian songs. According to the official Facebook page of RSSS, Ramanathan Seetharaman is the founder of the organisation. Credit: Facebook 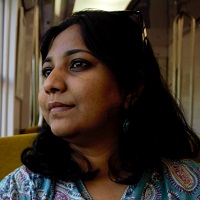 Chennai: Many mainstream Carnatic artists who have sung Christian hymns or have been seen with Christians are coming under attack by an organisation claiming to fight for Hindus in Tamil Nadu. It is a manufactured controversy that is blowing up quickly among musicians’ circles and comes in the wake of threats made to singer O.S. Arun who sang at a ‘Christian event’ as reported in The Wire.

Against this backdrop, an audio clip is being circulated on WhatsApp, which, according to the forward, is a conversation between O.S. Arun and the ‘head’ of an organisation called RSSS Coimbatore. Since the person, who called himself Ramanathan, said the final ‘s’ in the name of the outfit rather quickly and softly, this reporter sought to clarify with the Rashtriya Swayamsevak Sangh if he was associated with them.

A swift rebuttal came and has since then been circulated on WhatsApp as well: “There is an audio conversation between one Ramanathan and O.S. Arun (Carnatic Singer) is doing rounds in Whatsapp. In the conversation, the said Ramanathan introduces himself as Chief – RSSS. Without getting into the details of the conversation, we wish to clarify that RSSS full form is Rasthriya Sanathan Seva Sangh, is not connected with our Rasthriya Swayamsevak Sangh. Hence request not to forward that conversation in any groups, because people might mistake him to be official from RSS. If someone forwards this in any other groups you are in, clarify them that RSSS is no way connected with RSS (sic).”

According to the official Facebook page of RSSS, Ramanathan Seetharaman is the founder of the organisation that “is for the welfare of all Brahmins in the world” and claims to work towards developing the strength of the community. 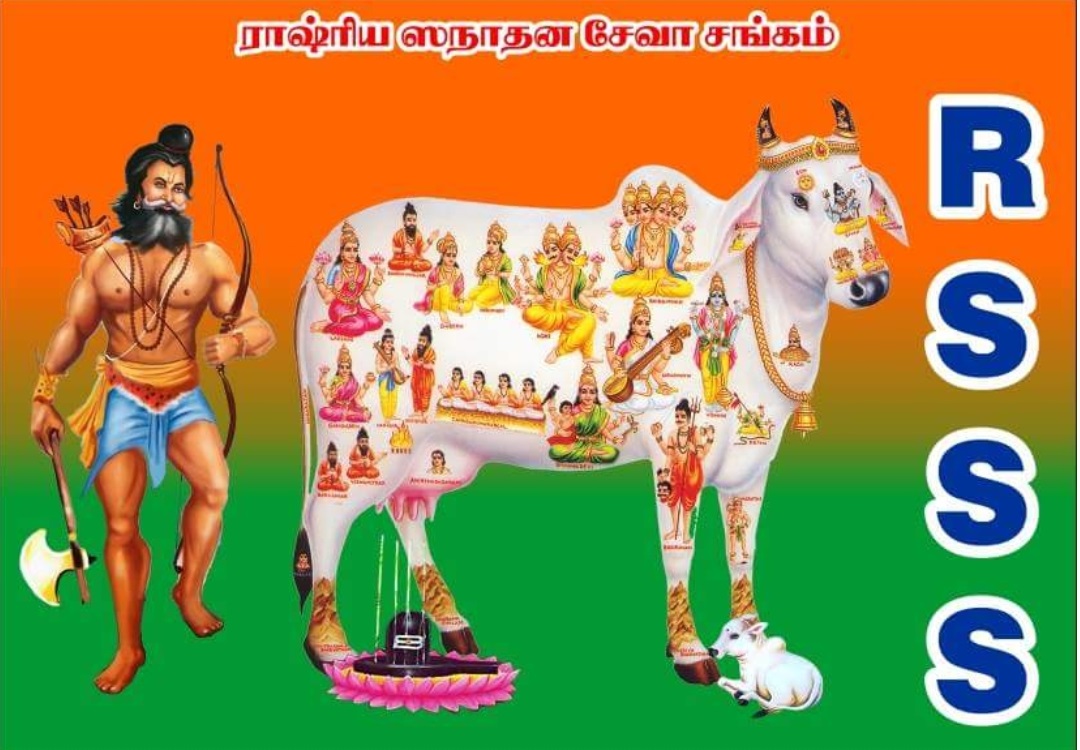 The logo of the RSSS. Credit: Author provided

In the telephonic conversation in Tamil, Ramanathan asks, “Why are you singing for Christians, being a Hindu?” Arun replies and says he has cancelled the event. Ramanathan is not happy. “You should have never agreed to do this.” Arun says in a calm manner, “The Hindu Sanatana Dharma says we must respect all faiths. We only wanted to do a musical concert. Since many people opposed it we have cancelled the event now. Why don’t we leave this at that?”

Ramanathan then accuses Arun of selling out for money at which point Arun says he’s doing this for free and that the people who have been attacking him for this concert have never shown any interest in helping him with his social service. The conversation continues much like this, and then Ramanathan brings up the name of artiste Nithyashree Mahadevan who has sung a Christian Carnatic album. Already, videos of Mahadevan, the granddaughter of Carnatic music’s foremost singers D.K. Pattammal, singing Christian songs are filled with vengeful comments. “Everyone has sung. Bombay Jayashree has sung. T.M. Krishna has been singing every year, what about that?” Arun points out before asking why no one has ever opposed T.M. Krishna for singing in a Church.

Ramanathan says he has been calling everyone and “shouting” at them and that he has no personal enmity with Arun. “We are a Hindu organisation and are fighting for Hindus. How will we support this? (T.M. Krishna singing in a church),” Ramanathan asks, adding that he didn’t know that such a church concert had happened and that Arun should send him “that porukki’s number”. Porukki is a rather impolite Tamil word with many meanings, the least offensive of which is ‘loafer’. Upon hearing the word, Arun breaks into laughter. Ramanathan threatens, “We will make sure he’s beaten up wherever he goes next.”

Arun quickly clarifies that he doesn’t want Krishna to be harmed but was only educating Ramanathan about the many artistes who sing like this. “You just give us the number of people who do this. That’s enough,” Ramanathan adds. “Just give me the phone number of people who are doing acts like this against Hindus our religion, these chameleons, and we will take care of the rest.”

But who is Ramanthan and why is he calling artistes up with such impunity, asking them to not sing for Christians, and threatening to beat up T.M. Krishna?

The Wire spoke to Ramanathan who confirmed that it was indeed his voice. “How can he (OS Arun) being a Hindu sing Christian songs wearing a cross around his neck?” he asked. “Is it not wrong?”
When asked about the RSS disowning itself from his call, he said, “I run my own organization called Rashtriya Sanadhana SEVA Sangam. It is a part of the Tamizhaga Hindu Parivar and not the Sangh Parivar. I don’t care if they disown my comments and refuse to share it. I stand by it.”
The man behind the voice

Ramanathan has a rather interesting backstory. He was the BJP in-charge of Velandipalayam, Coimbatore, as late as 2013. He was arrested in October 2013 for enacting a ‘drama’ – Ramanthan threw a petrol bomb into his own house in a bid to boost his image within the party and create communal disharmony in the area. Several news reports from 2013 refer to this event. He calls the charges against him “fabricated”.

Since his image had taken a beating and Ramanathan was about to be expelled from the party, he alleged that people who had stuck posters on walls against Narendra Modi’s visit to Trichy had also thrown petrol bombs into his home. Ramanathan was finally arrested under various sections including 153(A) of the IPC (promoting enmity between different groups on grounds of religion, race… and doing acts prejudicial to maintenance of harmony). Later in the month, Ramanathan was stabbed in the hip by two persons on a motorcycle. 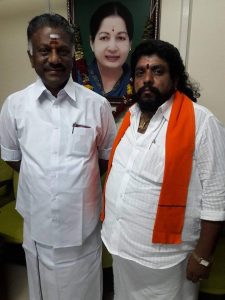 He now runs RSSS and is seemingly on friendly terms (according to photographs on his Facebook page) with various AIADMK and BJP leaders including chief minister Edappadi K. Palanisamy, deputy chief minister O. Panneerselvam, BJP MP from Kanyakumari and Union minister of state for finance and shipping Pon Radhakrishnan and the state BJP leader Tamilisai Soundarrajan.On being seen with various leaders in power he says, “I don’t have any close relationship with them. These photos are from when I met all of them to discuss about the incident where Dravidians were making pigs wear the sacred thread.” Was he a BJP leader ever? “Yes I was. But I left because of some differences of opinion.”

Ironically he also has a photograph with music composer-turned-actor Vijay Anthony who was also abused for being seen in the photo with Aruna Sairam and Kanimozhi.

Ramanathan has not stopped with making phone calls to artistes. He has also uploaded a YouTube video in which he says it is very bad that Christian missionaries are using Carnatic singers to sing on Jesus. He condemns Carnatic singers for singing for Christians, especially Nithyashree and O.S. Arun.

He also issues a threat: “If such a programme ever happens again, we will not let you sing anywhere in Tamil Nadu.” He appeals to Nalli Kuppuswamy Chettiar’s family that patronises the sabhas and the music season in Chennai to boycott such artistes. “If these people show up to the Thyagaraja aradhana we will showcase our opposition. Wherever they sing we will oppose them. The consequences will be dire for these people. Jai Shri Ram. Bharat Mata ki jai,” he says.

Ramanathan claims he doesn’t condone violence and by protest he means “we will go and shout at the event. Why will I or any of us hurt anyone?”

Singer T.M. Krishna told The Wire, “I have been threatened before – be it the M.S. Subbulakshmi issue or the Andal issue or even simply my political position. But I have been wondering why I have even been dragged into this conversation. Of course, I believe one should sing in churches, I believe music should have multi-religious and non-religious hues. What I find fascinating is that in this conversation, supposedly between Arun and this gentleman, that was laughter when I am called a ‘porukki’. The musician could have easily clarified his own position about it, but he kept bringing my name up instead, maybe because it’s easier to deflect the whole thing into being about me.”

Krishna said “We Carnatic musicians have fed this extreme Hindu fever over the years and today it is coming back to hurt us. I hope we learn from this experience, reflect and realise that Carnatic music must transcend religions and beliefs in actual content and not just in superficial verbal platitudes. We cannot succumb to these bullies and become even more conservative. I support any musician who wants to sing Christian, Islamic, Buddhist, Jaina and of course atheistic and nonreligious compositions. That’s the direction this art form should take. Despite what he may have said about me, I support and defend Arun’s right to sing Christian songs.”

In Tirupur in January this year, after a controversy over Andal and his stand on the issue, there had been a threat to Krishna’s concert. “The organiser was called at noon and told that the RSS was going to come and stop the concert. The auditorium owner was told he cannot hold the concert. I was asked to give an apology. I refused. RSS functionaries had to be placated by people there and the entire concert eventually happened with police presence. This is not new to me, but what is scary is that it’s not just happening to people who you may think are left-of-centre. Many in the music community might have thought that they are right-of-centre or are supporters of Modi, are pro-Hindu or pro-Brahmins etc, but they must remember that for these people all that doesn’t matter,” Krishna said. “I hope artists  realise that they too are political beings”, he added.

This story has been updated with quotes from Ramanathan