According to police, more than 3,400 people were arrested from various parts of the state for violating lockdown rules. 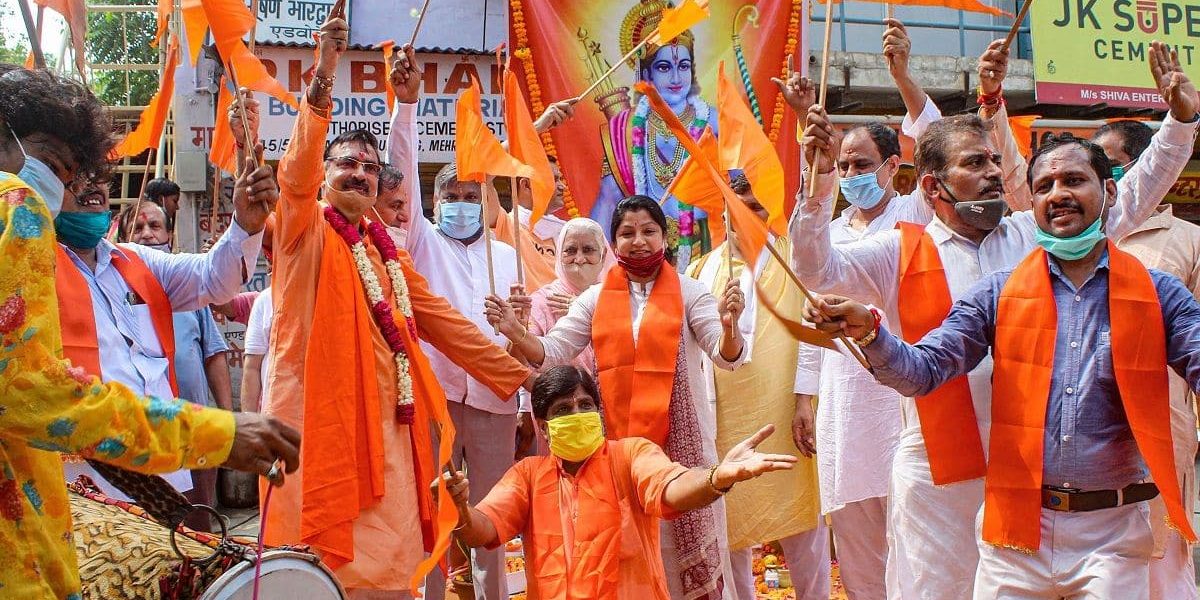 Kolkata: There were sporadic clashes between the police and saffron activists across West Bengal on Wednesday for defying the total lockdown and holding celebrations for the groundbreaking ceremony of the Ayodhya Ram Temple.

Normal life was completely crippled in the state due to the lockdown, the fourth in a fortnight.

According to the police, more than 3400 people were arrested from various parts of the state, including 850 from the city, for violating the lockdown “irrespective of their reasons”.

Clashes were reported from Kharagpur in West Midnapore district, Narayanpur in North 24 Parganas, Coochbehar and Alipurduar towns in north Bengal, among others.

At Kharagpur, a procession by BJP workers to mark the day was stopped by the police leading to a scuffle.

“Some policemen were injured in the incident and several BJP workers were arrested,” a police official said.

In Alipurduar town BJP workers were stopped from organising a bhoomi pujan celebration in the midst of the total lockdown leading to a tense situation.

BJP workers also tried to organise a ‘yagna‘ at Narayanpur area but were stopped by locals. Police said “force” had to be used to disperse the crowd.

Scuffles with the police were also reported from Coochbehar district where BJP supporters were stopped from holding a rally.

State BJP president Dilip Ghosh, who organised a celebration at his residence in New Town, said the crackdown by the police reflected the “anti-Hindu mindset” of the state government.

“The TMC government has deliberately disregarded the sentiments of the Hindus in the state,” he claimed.

“We were requesting [the state government] for the last few days to change the date of the total lockdown, but it was not heeded. When devotees of Lord Ram want to celebrate the day in a small way in Bengal, they are stopped by the police,” Ghosh added.

“Lord Ram is worshipped around the world. But @MamataOfficial government is insulting the beliefs of the Hindus. Are we living in the land of sharia that we can’t celebrate Lord Ram in Bengal?” he tweeted.

“There is no harm in celebrations, but the lockdown has been clamped due to Covid-19. All of us should respect that and abide by it,” he said.

Vishwa Hindu Parishad (VHP) and BJP workers in Kolkata celebrated the laying of the foundation stone for the Ram Temple. Rituals were held in areas like Baghbazar and Burrabazar.

Celebrations were organised by BJP and right-wing outfits in several other parts of the state and went off peacefully. A ‘yagna‘ was organised by BJP workers at Rajganj in the Jalpaiguri district.

In many districts, Trinamool Congress workers and leaders too organised ‘Ram puja‘ to mark the day.

Normal life was crippled in most parts of the state due to the lockdown on Wednesday, which was part of the twice a week measure by the state government since July 23 to break the chain of the contagion. Public transport was off the roads and government and private offices, banks and commercial establishments remained shut.

Only those involved in essential services like health establishments, besides pharmacies and petrol pumps functioned.

Flight services to and from Netaji Subhash Chandra Bose International Airport were suspended for the day and long-distance trains were rescheduled due to the lockdown, the fourth in a fortnight.

Schools, colleges and other educational institutions in the state had remained closed since late March when the first phase of the nationwide lockdown was imposed.

The state’s caseload reached 83,800 while its coronavirus death toll rose to 1,846 on Tuesday, a health department bulletin said.