As soon as the rally entered areas inhabited largely by Muslims, it turned violent. The mob pelted stones at houses and shops and ransacked vehicles parked on the road. 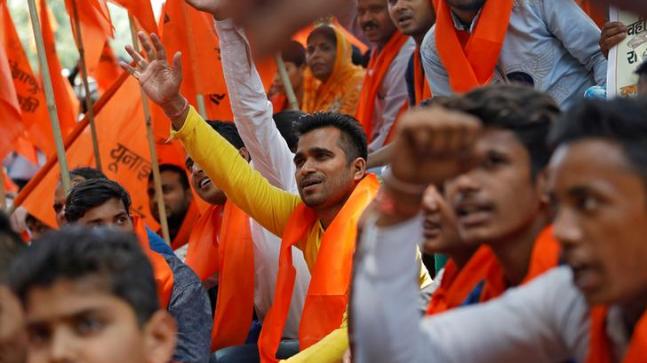 Kawardha, Chhattisgarh: A curfew was imposed in Kawardha town of Chhattisgarh on Tuesday after violence broke out during a rally taken out by right-wing outfits and attended by BJP MP Rajnandgaon Santosh Pandey, leading the police to resort to lathicharge to control the situation, officials said.

According to the officials, some policemen sustained minor injuries while dispersing a mob which pelted stones at houses and shops and ransacked some vehicles.

No civilian was injured and around 40 people were detained after the incident, the officials said.

They said no permission was given by the administration for the rally which was taken out two days after a clash broke out between the Hindu and Muslim communities over removal of religious flags from a thoroughfare in the town, the headquarters of Kabirdham district located around 126 km from state capital Raipur.

The curfew was imposed at around 11:30 am as soon as the violence broke out during the rally taken out by right-wing organisations. The situation was brought under control within half an hour, Kabirdham Collector Ramesh Sharma said.

No permission was granted for the rally as section 144 of the CrPC (banning assembly of five or more people at one place) was in force in the town after Sunday’s clash, he said.

As soon as the rally entered areas inhabited largely by Muslims, it turned violent. The mob pelted stones at houses and shops and ransacked vehicles parked on the road, a senior police officer said.

Miscreants tried to enter some houses but they were prevented by police personnel who were deployed in large numbers in view of the prohibitory orders imposed in the town, he added.

Tension prevailed on Sunday afternoon after people from the two communities clashed over removal of religious flags from Lohara Chowk of the town. The district administration then invoked section 144 of the CrPC to control the situation. Police had lodged FIRs based on cross-complaints and arrested some persons in connection with the clash.

To protest Sunday’s incident, right-wing outfits took out the rally. Pandey demanded the arrest of those who had allegedly disrespected saffron flags on Sunday. He further called for maintaining peace.

Meanwhile, state BJP president Vishnudeo Sai accused Chief Minister Bhupesh Baghel of ignoring the deteriorating law and order situation in the state and alleged certain elements were trying to play with religious faith of the majority community in Kawardha.

A BJP delegation led by Leader of Opposition Dharamlal Kaushik will visit Kawardha on Wednesday to meet party workers “injured” during Tuesday’s incident and also their families, the party said.