Listening to Music with Saffron Ears

The Hindutva brigade is frenetically attempting to vitiate the cultural and intellectual atmosphere in the country. The threats to Carnatic musicians is only the most recent chapter in a long history of the champions of so-called “cultural nationalism” stepping on secularist ideals. 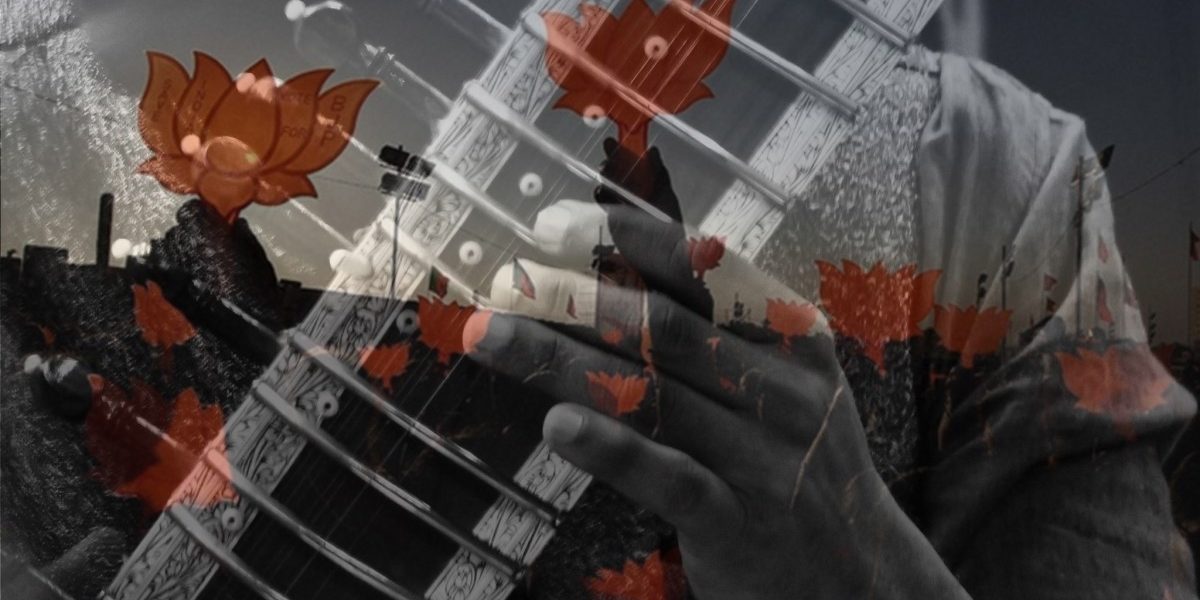 Ever since the Bharatiya Janata Party came to power at the Centre in May 2014, intolerance of every kind has been growing exponentially. Many organisations directly or ideologically associated with or inspired by the Rashtriya Swayamsevak Sangh (RSS) had been practising intolerance for many decades. Vandalising art exhibitions, stopping cultural events or lectures and seminars, or theatre and film shows by unleashing violence was the favoured method. Harassing individuals – for example, the late M.F. Husain, one of the best known Indian painters – in various parts of the country on flimsiest grounds of “hurt religious sentiments” was also a time-tested method.

In most cases, the pusillanimous attitude of the state acted as an indirect encouragement to such attempts.

However, since May 2014, the state has been palpably providing endorsement and protection to such intimidation tactics and ruling party MLAs, MPs and ministers – both in the states and at the Centre – have been issuing direct and indirect threats to all those who dare disagree with the Hindutva ideology. Lynch mobs and vigilante groups have been unleashed on people under the name of cow protection, prevention of ‘love jihad’ and promotion of ‘ghar wapsi’. The Uttar Pradesh police even formed ‘anti-Romeo squads’ to harass innocent couples sitting in public parks and chatting. The latest feat of the police is to shower rose petals on processions of Kanwariyas who often indulge in unruly behaviour.

Kanwariyas walk through a field in Kolkata on August 8, 2018. Credit: PTI/Ashok Bhaumik

The Hindutva brigade is frenetically attempting to vitiate the cultural and intellectual atmosphere in the country. Writers in several states have been threatened or killed, forced to withdraw their books or withdraw themselves from writing. The champions of the so-called “cultural nationalism” are not willing to give any space to liberal and secular elements as is clear from a recent statement of Ram Madhav, the RSS-deputed national general secretary of the ruling Bharatiya Janata Party, who derisively declared that liberals in India have become irrelevant except on issues like “homosexuality and all that”.

The massive campaign currently underway against those Carnatic musicians who sing Christian Carnatic hymns or participate in musical events organised by Christian institutions or churches is yet another indication of this trend that is gathering steam by the day. All this militates against the inclusive ethos that has been built by all religious and linguistic communities over millennia. Those who do not tire of crying hoarse about ‘Indian culture’ are the ones who are leaving no stone unturned to tear this ethos asunder.

Music has always been regarded as a universal language of love and devotion. Even before language evolved, man had begun to respond to sound. In Hindu tradition, naad (sound) has been equated with Brahma (supreme being). Musicians belonging to different religious communities have been one in describing their highest state of musical awareness as the worship of god. Whether it is the north Indian tradition of Hindustani classical music or the south Indian tradition of Carnatic music, musicians have paid attention only to the religiosity of a composition, not its religion.

Is there a Hindustani classical vocalist – Hindu, Muslim, Buddhist, Jain or Sikh – who will not sing the pristinely beautiful khayal composition Karim Naam Tero in Raga Miyan ki Malhar, created by Tansen? Have vocalists like Pandit Jasraj not sung Hazrat Khwaja Sang Kheliye Dhamal in praise of Hazrat Nizamuddin Aulia? Were the qawwal brothers Shankar-Shambhu  not among the finest exponents of this musical form and were their naats (songs in praise of the Prophet) and qauls etc. not appreciated by Hindus and Muslims alike? Are shabads of the Guru Granth Sahib not sung in different ragas and was Guru Nanak not always accompanied by the Muslim rabab player Mardana?

Do all Muslim musicians, especially the dhrupad singers of the Dagar family, not sing compositions that are in praise of Hindu gods and goddesses? Have Muslim poets like Rahim (the great general-statesman Abd-ur-Rahim Khan-e-Khana who was one of the nine jewels in the court of the Mughal emperor Akbar) and Raskhan not written poetry in praise of Krishna and Radha? Can we really restrict literature, art and music to the narrow confines of one religion? When Ustad Amir Khan sang the bada khayal bandish Jinke Man Rama Biraaje in raga Malkauns, did he commit blasphemy? Or, when Ustad Bade Ghulam Ali Khan sang Hari Om Tatsat? Even the most orthodox Muslim clergy never raised any objection.

One of the best bhajans ever sung in Hindi films belongs to Vijay Bhatt’s Bharat Bhushan-Meena Kumari starrer Baiju Bawra. Man Tarpat Hari Darshan Ko Aaj began with chanting of “Hari Om” and it was written by Shakeel Badayuni, its music was composed by Naushad and it was sung by Mohammad Rafi. Who can forget Ustad Amir Khan’s rendering of raga Multani in film Shabab? It was also a kind of a prayer: Daya Karo Hey Girdhar Gopal.  And, what about the devotional songs sung by Kerala-born Christian Yesudas in a film like Aalap?

When the Indian subcontinent was divided and Pakistan was founded on the basis of religion, narrow communal attitudes began to creep in. First, because of the completely erroneous notion that Islam did not approve of music, the Pakistani elite began to give a cold shoulder to music in general and classical music in particular. Moreover, an attempt was made to change the names of the ragas that carried names of gods and goddesses, for example, Durga, Ramkali, Shyam Kalyan, Shankara, Bhairav and Bhairavi.

However, due to the indifference shown by the Pakistani classical musicians to this attempt, it fell flat on its face soon enough. The champions of the Hindutva are also very unhappy with the fact that India’s constitution defines it as a secular republic and not as a Hindu Rashtra (Hindu nation). Therefore, much like their Pakistani counterparts, they are doing their best to browbeat everybody who has a different viewpoint. Carnatic musicians are just their latest targets.

As great Hindi writer Premchand said nearly eight decades ago, “Communalism always talks of culture. It perhaps feels embarrassed to show its real face. Therefore, it dons the robes of culture, just like a donkey who dresses up like a lion and roams around intimidating other animals in the forest.”

According to reports in The Wire, one Ramanathan, who was a local BJP leader in Coimbatore until five years ago and who later formed his own organisation Rashtriya Sanadhana SEVA Sangam (RSSS), is spearheading the campaign of issuing threats of violence to Carnatic musicians if they “insult” the Hindu religion by singing in musical events organised by the various churches or Christian organisations.

It is truly heartening that these threats have not been able to intimidate or frighten most Carnatic musicians who seem to be determined to pursue the secular goals of treating all the communities equally insofar as their music is concerned.

Although, as T.M. Krishna, who is a very popular, creative and much appreciated as well as much maligned singer, has been emphasising for a long time, the milieu of Carnatic music has been dominated by patriarchal values and the ideology of Brahminism. They provide a fertile ground to narrow, hate-filled ideologies and trends that find shelter under the umbrella of Hindutva and their regressive version of the Hindu culture. Three years ago, when writers belonging to different Indian languages started returning their Sahitya Akademi awards and other state awards to protest against the growing culture of intolerance in the country as was evidenced in the lynching of Akhlaq in Dadri for allegedly killing a cow and eating beef and in the killings of Kannada writer M.M. Kalburgi, Marathi rationalist writer Narendra Dabholkar and Chhatrapati Shivaji’s left-wing biographer Govind Pansare, most Hindustani classical musicians remained mute spectators.

One hopes they will derive inspiration from the way Krishna has announced that he will release one song every month in praise of Christ or Christianity and one song in praise of Islam or Prophet Muhammad and will also sing in churches. This can be the only befitting reply to those who want to bully their way and capture the cultural, artistic and intellectual space.