By Giving in to Hindutva Trolling, the Army Has Undermined its Secular Ideals

The defence forces are a symbol of national integration, which the forces of hate and bigotry don't like. 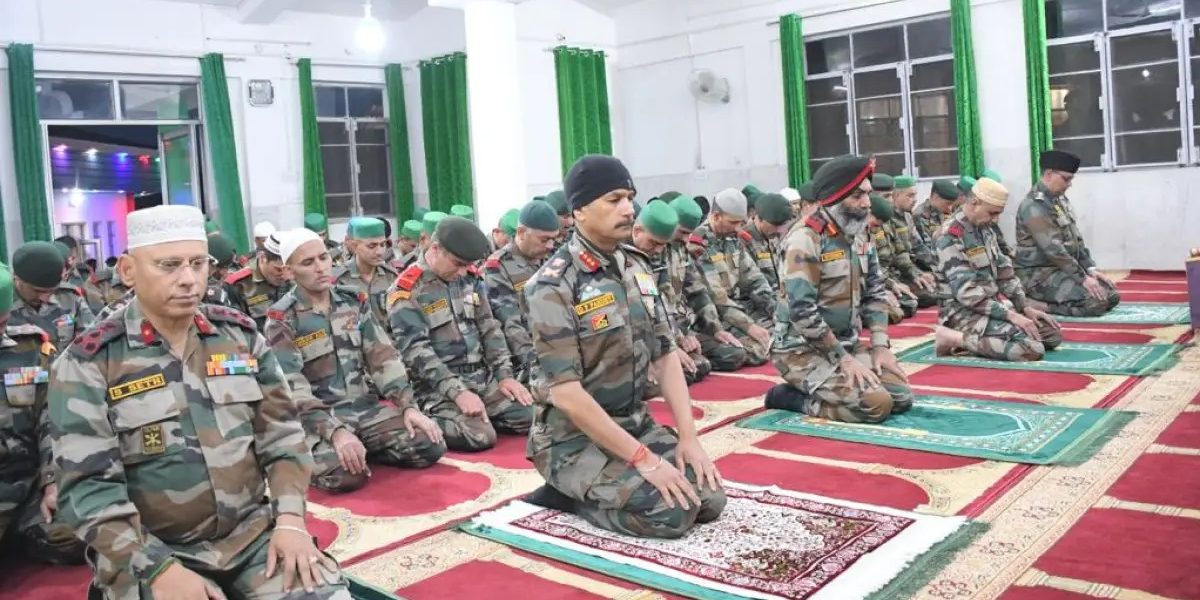 After Independence, Jawaharlal Nehru and other leaders celebrated India’s diversity and spoke of secularism, and some institutions actually put it into practice. The defence forces, the film industry, the railways and cricket, among others, knit this diverse land together – they are symbols of the secular ideal. On a train, you never know who will be in the next seat, and a film unit includes people from all backgrounds. The much reviled Hindi masala film preaches the virtues of secular India and the hero could well be a Muslim romancing a Hindu woman. Nobody notices, no one cares — in the darkened auditorium, everyone hoots, claps, laughs and cries together. Likewise, the defence forces are a shining example of Unity in Diversity. Soldiers fight shoulder to shoulder and celebrate every festival with love and respect, a longtime tradition.

To the narrow, bigoted Hindutva mindset, all this is anathema, a reflection of what is wrong with India. Muslims and Hindus working together? Playing together? Hindus participating in Iftar and Muslims in Diwali? This must be stopped, or better still, destroyed, since destruction seems to be the default mode of Hindutva warriors.

The Mumbai film industry was the first to be attacked. As far back as 2015, Kailash Vijayvargiya had tweeted against Shah Rukh Khan, and Adityanath, then an MP, compared the actor to Hafiz Saeed. The uproar from fans and others forced the BJP to distance itself from both comments, but it was a curtain-raiser for what was to come.

Also read: Why Guru Tegh Bahadur Is Not the Anti-Muslim Icon BJP-RSS Claims He Is

Many in the film industry are now making fiercely nationalistic films, which hew closely to the ruling party’s ideology. They often mangle history to show Muslims in a bad light. The saffron flag is waved about with enthusiasm, various gods are invoked and Hindu rashtra nationalism is front and centre.

Filmmakers often pick up social changes and trends of their times, but commerce rules. Ideology does play a role, and it is always a good idea to please the political masters of the day. Cinema will always be a target for the saffron brigade for its potential to carry the Hindutva message to the masses.

Producers and directors have the right to make the films they want to, even a propaganda vehicle like The Kashmir Files, but it has a chilling effect on others, especially bigger filmmakers who are risk-averse. A remake of Amar Akbar Anthony is unlikely. Of course, the film business is full of mavericks, so it’ll be a while before they’re all tamed.

The Army, on the other hand, is a disciplined institution trained to follow orders. It is an upholder of the constitution but also beholden to the government, which pays wages and pensions and controls it for all practical purposes. This means it can be manipulated relatively easily, if officers at the top don’t hold their ground.

That is what seems to have happened in the mysterious case of the deleted tweet about an iftar event organised by the Army in Doda in Jammu and Kashmir. The Army’s tweet used the ‘dangerous’ hashtag #secularism as a good thing – which must have drawn the attention of the hounds.

When one such worthy, who runs a rabid Hindutva television channel, tweeted about the iftar held by the army, the local Defence PRO, instead of ignoring the trolling, deleted his tweet. Perhaps he was ordered to do so or felt at risk if he didn’t move quickly to capitulate. Either way, this sorry episode tells us a lot about the state of India today: even an institution like the army is vulnerable to the prevailing headwinds of toxicity.

So will the Army cancel such events in the future? Would it rather play safe than robustly stand for its own traditions and secular values? Or worse, will it continue to hold such events, but under the radar?

These are not rhetorical questions. The bigots play the long game, chipping away at long-held values diligently. Notice how India’s comedians have fallen silent and how one rarely hears any of them make anti-establishment jokes. Seven years ago, Adityanath’s comment on Shah Rukh Khan sounded outlandish. Today, he is chief minister of Uttar Pradesh and Khan, already besieged after his son was arrested, is neither seen nor heard. Nor do his colleagues and friends say much.

The swift deletion of the tweet by the Defence PRO shows that establishments have become quicker to buckle. There might be some justification in a company withdrawing an ad that “hurt the sentiments” of trolls because it preached decent, secular values, because no company wants to see its sales affected or its showrooms ransacked. But why would the Army succumb to a stray comment that hits at its cherished traditions? One can only conjecture what kind of pressure was put on it.

Will it be cricket next? What if there is a campaign to keep Muslim players out — will the BCCI agree, given that it is run by the home minister’s son? Government employment could follow — the Hindutva channel referenced above already talks of Muslims engaging in ‘job jihad’. Private companies would rapidly fall in line.

Secularism hurts the sentiments of Hindutva-spewing elements because it is a bulwark against the polarisation they are trying to spread to consolidate vote blocks. Systematically, at the grassroots level, Hindutva is being spread where it barely existed. From there will emerge new warriors to take up its cause, online and offline.

So far, India has resisted succumbing to such naked bigotry, but for how long? If respected institutions like the army give in, the ordinary citizen, who believes in simple decency and humanity, will be unable to resist the onslaught on the values that have kept India together for so long.