The Sangh parivar's desperation to quickly try and recover lost ground before its goals are thwarted is cranking up the hatred quotient in India.

RSS volunteers attend a conclave on the outskirts of Pune, on January 3, 2016. Credit: Danish Siddiqui/Reuters 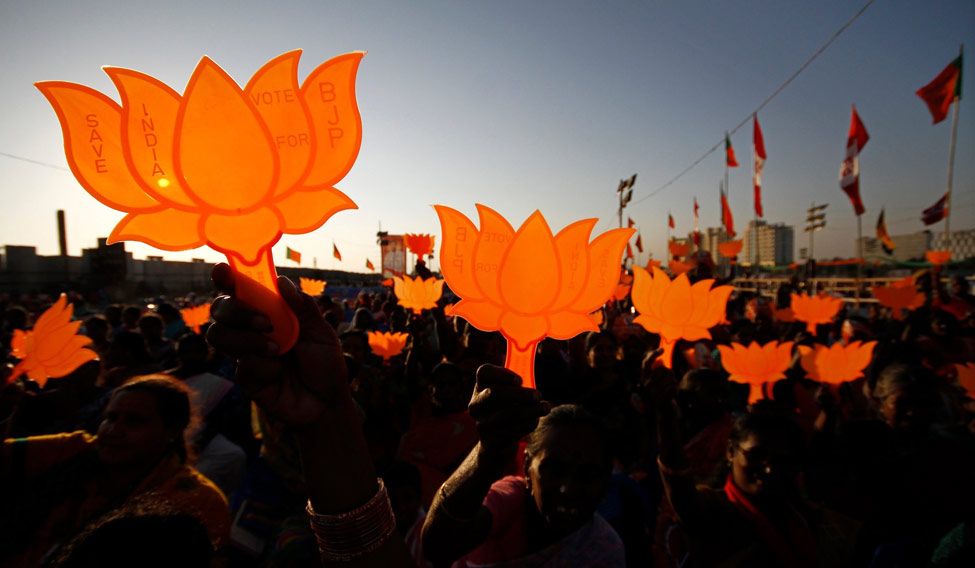 Hindutva is all around us, guiding our national conversation. Credit: Reuters

There is no mistaking a new sense of urgency in the BJP and the larger Sangh parivar. The results in the Gujarat elections and Rajasthan bypolls point to rising popular dissatisfaction with the party.

Eight state-level elections, including in Rajasthan and Karnataka, are on the way and by May next year, perhaps earlier, the general elections will be held. Current wisdom holds that the BJP will not get the 282 seats it got in 2014 and that Prime Minister Narendra Modi could either be leading a shaky coalition or worse, not even return as prime minister, since coalition partners may want someone who is more accommodative to their concerns.

As its many close allies are getting restless and expressing their unhappiness at the way they are being treated by the BJP, they will be even more vocal and obstructive in a proper coalition. And what if the party does poorly and an opposition coalition comes to power? It is not such a wild thought – the shock of 2004 is still fresh in everyone’s mind. It is a thought that worries the parivar but most of all Modi and BJP chief Amit Shah. A rattled party has reverted to what it knows best-polarisation, fuelled by turbo charged Hindutva.

The Rashtriya Swayamsevak Sangh (RSS) normally does not get too worried about election results – it continues to work towards its long-term objectives, whichever government is in power. The BJP naturally wants to win elections, but the RSS and all the other outfits subscribing to that ideology have an instrumentalist approach to such democratic processes — for them being in the government just makes their job easier, since they can influence policy and achieve their goals faster.

For decades, they managed to place their own people in the right places in government – just count the number of ex-government officials who came out out of the woodwork in 2014. The RSS didn’t stop working when they were banned, or when the BJP had just two seats in parliament.

Also read: This Will Be the Year of Peak Hindutva

But naturally, the handsome victory of 2014 came as a big booster. Now it had its own hand on the levers of power, which allowed to accelerate its plans. Over the last nearly four years, no effort has been spared to capture key institutions, change history books, push through much favoured policies and edge out the much reviled secularists. Jawaharlal Nehru has been painted as the original sinner – this has been an article of faith with the RSS for generations – responsible for much that has gone wrong with India. Muslims have been pummelled into submission.

Hindutva and its many malcontents are out there, not just operating on the fringes but in literary salons, television studios and even teacher training programmes. Hindutva is all around us, guiding our national conversation.

This is a country that today debates, on national television, the prime minister’s jibes against a fellow parliamentarian because she laughed a bit too loudly. The Goa chief minister’s stray thoughts about the horror of women drinking beer (and thus going against Hindutva sanskar) bothers our pundits more than the landmark ruling of the Supreme Court against mining licences. The prime minister can refuse to hold a press conference or give a truly no-holds barred interview and the media has no option but to accept.

A new normal has been created where we have become almost inured to the idea of people being killed for no reason than suspicion of their diet. Lynchings are filmed, all the better to give them wider circulation to reach true devotees and to teach ‘love jihadis‘ a lesson. How soon before other ‘deviants’, such as gays or liberals are targeted?

The creation of this toxic and poisonous atmosphere, where minorities are terrorised and history is rewritten, merely scratches the surface. The long-term plans of the Sangh parivar are more ambitious. The removal of Kashmir’s special status, changes to the Civil Code, building of the Ram Mandir and, the pet project, completely reworking the constitution – all these are crucial to the Sangh project but are nowhere near achieved. It is imperative that this goal is not thwarted. 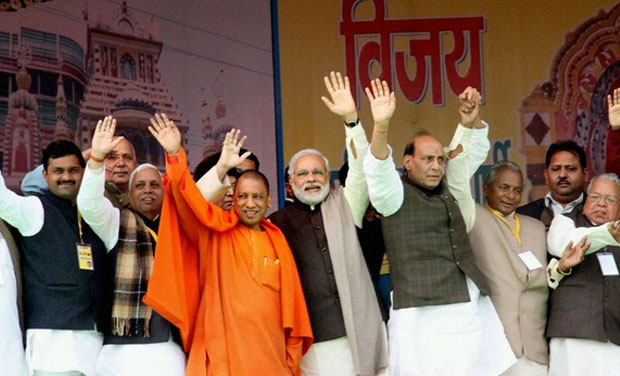 The long-term ambitious plans of the Sangh parivar include building the Ram Mandir and reworking the constitution. Credit: PTI

Not too long ago, it all looked very achievable. The BJP got what it wanted when it won a full majority in the Lok Sabha in 2014.

With their own government in power, Hindutva forces became more emboldened, more visible and more brazen in pushing through their agenda, with full confidence that the might of the state would not descend on them.

In any other law abiding society, the killers of Akhlaq and so many more since would have been brought to justice speedily; here they were declared as heroes, with the tricolour on the coffin of one of the alleged killers. A Vinay Katiyar would have been asked to explain his shocking statements by his party leadership, but there has been not a peep from anyone in his party, much less the prime minister. He might end up getting rewarded; after all, didn’t Yogi Adityanath make it to the chief minister’s chair despite all the charges against him?

But the buoyant mood of 2014 has faded. The big objectives remained as elusive as ever. The numbers in the Rajya Sabha are still weighed against the BJP and worse, the portents for 2019 are not good.  If a majority government with a strong and popular prime minister couldn’t initiate the first moves towards structural change, a coalition in which the BJP does not have the majority will find it even more difficult to do so.

Thus the desperation to quickly try and recover lost ground. The uptick in raising the temperature is to consolidate the Hindu vote – it is the one tactic that the parivar is good at and which has paid handsome dividends in the past. There is a familiar pattern in play – every polarisation tactic is being tried out in the hope that it not only keeps the flock happy and energised but also draws in the fence-sitters and the not-decideds who may be susceptible to Hindutva propaganda, even if they don’t know it.

At the ground level, organisations that enjoy an arms length relationship with the RSS and the BJP have cranked up the hatred quotient; the second tier, that is people in responsible positions but with a pedigree of hate mongering have started making even more outrageous statements and at the very top, where appearances still matter (the urban middle-class cannot be alienated too much), prejudices are aired in the name of correcting historical wrongs.

Also read: The Sheen Around Modi Is Quickly Fading

Thus, while one sees a riot here or violence there (Kasganj), one also suddenly finds Vinay Katiyar getting active and talking of how Muslims should leave India. The urban middle class may find all this distasteful. For them, the prime minister makes a quasi-election speech in Parliament, avoiding the Rafale controversy but doing everything to run down Jawaharlal Nehru, his descendants and his party. If only Vallabhai Patel had been the first prime minister, the whole of Kashmir would have remained with India, Modi says. That there is enough historical evidence that proves otherwise doesn’t matter to either Modi or to the Sanghis; they have been indoctrinated with these teachings for generations and don’t care for history or documentary proof.

To those who may cringe at the thought of approving street level Hindutva-type thuggery and who may reject Vinay Katiyar’s loony rantings, the prime minister’s anti-Nehru refrain makes a lot of sense —conflate that with the idea of dynasty and even liberal, ‘neutral’ intellectuals may be ready to nod their heads.

By this three-pronged effort, which marketers may call owning all segments, the parivar manages to keep all its constituents, hardcore as well as new-born, within the fold and hopes to increase its reach. In 2014, it was not just the old time parivar faithful who propelled the BJP to victory; Narendra Modi captured the imagination of the educated middle-class, the urban elite and the new, young voter, all of whom hailed the alternative to the corrupt ancient regime. They were mesmerised by talk of economic growth, jobs and a corruption-free India. They are now disappointed, at not just the economic performance of this government but also rising tensions. They may not be looking at Rahul Gandhi with hope, but they could turn their backs on the BJP. If they stray, looking for alternatives, the BJP could be on trouble.

That could mean disaster for the party – in the next few months, they have to be retained. Promises of ‘achhe din‘ won’t work this time. Why not try Hindutva and Nehru bashing instead; who knows it might just strike a chord?