While the state government has pushed the onus of permissions to district administrations, BJP is banking on these rallies to give their poll campaign an edge. 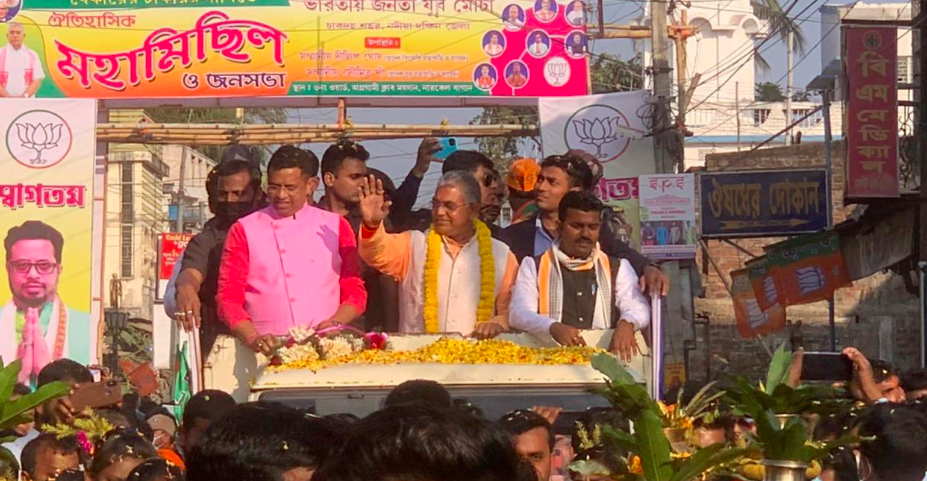 Kolkata: As the West Bengal assembly election approaches, the Bharatiya Janata Party – a principal challenger to the ruling Trinamool Congress – is sharpening its campaign. And one tool in its arsenal are the statewide Rath Yatras which it aims to hold between February and March.

BJP has written a letter to the TMC government, seeking permission for the rallies.

Responding, the West Bengal government on Wednesday asked the party to approach local authorities in districts for permission. “You may instead approach the appropriate authorities at local levels entrusted with maintenance of law and order including assemblies and processions etc. under relevant laws or regulations,” the government has written.

A senior BJP leader from Bengal told The Wire that party president J.P. Nadda will kick off the rally on February 6 at Nabadwip, in Nadia district. Union home minister Amit Shah is also “expected to participate, however, his schedule is not yet confirmed,” said the BJP leader, who requested anonymity.

Each rally will include a fashioned ‘rath’ or chariot and and the ‘yatra’ will cover all assembly constituencies in Bengal.

The rallies will end at Barrackpore, just north of Kolkata, in the North 24 Parganas.

Also watch | Ayodhya Rath Yatra or a Riot Tour Before the Election?

On February 1, BJP state vice-president, Pratap Banerjee wrote a letter to chief secretary Alapan Bandhopadhyay, to appraise the administration of the plan. Banerjee sought permission to discuss the modalities and co-ordinate with the state and the local administration.

“We have put in a lot of effort to chalk out the routes of this Rath Yatra. Our aim is to reach out to a maximum number of people and touch all 294 assembly seats. This Rath Yatra will increase our presence in rural Bengal,” said the senior BJP leader.

Also read: Of Tractor Parades and Rath Yatras: The BJP Has No Moral Authority to Criticise Farmers

Back in 2019, just a month before the Lok Sabha election, BJP had planned a similar Rath Yatra in Bengal. The state government had then denied permission, saying that such a rally could invite law and order problems.

BJP appealed to the Supreme Court, but the apex court upheld the division bench order. A Supreme Court bench led by then Chief Justice of India Ranjan Gogoi said, “Fear of violence by the state government was not unfounded.”

The BJP leader The Wire spoke to said that this time, the government should not deny permission for a Rath Yatra as “taking out such a rally is not a crime.” He said executing the programme was the BJP’s “democratic right”.

Veteran TMC MP Saugata Roy said that he was wary of attaching much importance to the BJP’s Rath Yatra. “They (BJP) always mixed religion with politics, this is nothing new. They are desperate as they know that they are going to be losing in the election. Let them do their communal politics, people of Bengal will never fall for it,” Roy said.

But poll watchers feel that the rallies will give BJP what it wants – visibility.

While speaking to reporters on Wednesday afternoon, state minister Bratya Basu said, “The Rath Yatra is essentially a religious carnival based out of the ideology of 15th century saint Chaitanya. But BJP doesn’t follow Chaitanya’s concept of inclusion and unity and practice the contrary. This is nothing but a politically motivated programme and their only aim is to polarise and divide Bengal.”

In the autumn of 1990, L.K. Advani had launched a Rath Yatra from Somnath to Ayodhya, the purpose of which was to stir up support for the demand of the construction of a Ram temple at the spot where the Babri Masjid stood.

Advani’s Rath Yatra propelled the Ram Janmabhoomi campaign to the forefront of Indian politics in the 1990s. This movement set off a social mobilisation that drew in groups and communities that had initially not fascinated with BJP’s ‘Hindutva’ plank. That yatra sowed the seed of Hindutva, made saffron the mainstream and gave wings to BJP to assert its dominance like never before.

Speaking to The Wire, political expert Udayan Bandhopadhyay said, “In Bengal, the Rath Yatra will affect a section of voters; mainly community-centric voters. The Rath Yatra is quintessentially designed for religious mass contact in order to consolidate Hindu votes. It was and is never meant for economic or otherwise socially inclusive outreach programmes.”