The Uttarakhand government has announced plans to bring 'population control' legislation. The opposition has asked why it has been moved to do so just before the polls.

New Delhi: Congress has said that the Pushkar Singh Dhami-led BJP government’s recent decisions to form district-level committees to check on “demographic changes” in certain parts of the state and to examine Uttar Pradesh’s draft population control Bill as a first step to drafting its own Bill, is a communal exercise aimed at removing focus from real issues ahead of the assembly polls.

The government had expressed “serious concerns” over these “demographic changes” and said attempts were being made to “vitiate the communal harmony” in the state.

The Dhami government had also announced that the director general of police (DGP), all district magistrates and senior superintendents of police have been directed to constitute district-level committees and to prepare a list of “outsiders” with criminal backgrounds involved in “illegal land deals”.

A statement issued by the government had said that “due to unprecedented rise in population in certain areas of the state, the demography of those areas has been majorly affected. And due to this demographic change, members of certain communities are forced to migrate from those areas. Also, there are possibilities that the communal harmony in those areas may be disturbed”.

Dhami later justified his decision, saying that steps were taken to safeguard the interests of the people of the state.

He also, however, stressed the need to maintain a record of “outsiders who have arrived without any documentation”.

“It is not wrong to keep vigil and remain alert. The government must have information about the people coming from outside for work and staying in the state.” 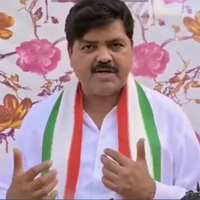 Reacting to the move, Ganesh Godiyal, president of Uttarakhand Pradesh Congress Committee, told The Wire that the chief minister used the words “avaanchhniya tatva” or undesirable elements as he described the people who have been accused of changing the demographics of the state.

“Such words are used to describe people who cause some kind of trouble or problem,” said Godiyal.

The Congress leader then questioned what had prevented Dhami from ordering action against such people. “Dhami is the chief minister of the state and if he has information that in any part of the state there is a presence of unwanted elements, then he should direct the superintendent of police or the district magistrate of that district to take action against them.”

He said, “By merely using such words, the BJP government is trying to fan communal sentiments. This government has been in power for the last nearly four and a half years, but right before the election, it is now remembering that the demography of the state is getting changed. It only means that the BJP government only wants to raise such unnecessary issues to make gains in the upcoming elections. They want to bring bitterness in the politics and want to create an environment in their favour by capitalising on such an atmosphere.”

Godiyal said BJP’s ploy will not pay off. “People have understood that this government did nothing for five years and now, just before the elections, it is raising such emotional issues to hijack the elections. People want to know the view of the BJP government on real issues such as unemployment, rising prices and inflation, development and about ridding the roads of the potholes that exist,” he said.

The Congress leader also charged that the BJP had failed the people when forest fires raged in the state.

“In the last two years, there were huge forest fires in the state and yet not a single representative of the state reached there. They just allowed the forests to burn,” he said, adding that “now, when the situation is so bad, people realise that the government wants to distract them from the important issues facing the state, and therefore, they will not let the designs of the ruling party fructify”.

Earlier, former Congress chief minister and senior party leader Harish Rawat had also cautioned the government against “targeting a particular community” through demographics and had suggested a study on the “rate of population rise” instead to address issues of illiteracy, malnourishment, among others.

The BJP has thus far given all indication that it is preparing to make the issue a prominent one in the 2022 assembly elections. The party vice president in Uttarakhand, Devendra Bhasin, said it was right to identify “outsiders” and know what they were up to.

He said that it would result in identifying “disruptive elements” and prevent them from disturbing “communal harmony in the devbhoomi”. Bhasin also said that the move was essential and was not a political one, since Uttarakhand is a “sensitive border state.”

The Uttarakhand government said it would be examining Uttar Pradesh’s draft population control Bill to “learn more” before it drafts its own Bill.

The decision of the government came nearly two months after functionaries from 35 RSS affiliates held a meeting with the state BJP leaders and suggested that the Dhami government should legislate a population control policy on the lines of the policies of Assam and Uttar Pradesh to maintain the “demographic balance” of Uttarakhand.

The state government has been insisting that there has been a “significant demographic change in five of its 13 districts”. BJP has also sought to impress that “minority groups” have risen in population in some areas, without explaining as to why this is immediately a cause for concern and legislation.