The Supreme Court also said that Bilkis Bano can seek higher compensation from the state government by filing a special leave petition in a lower court. 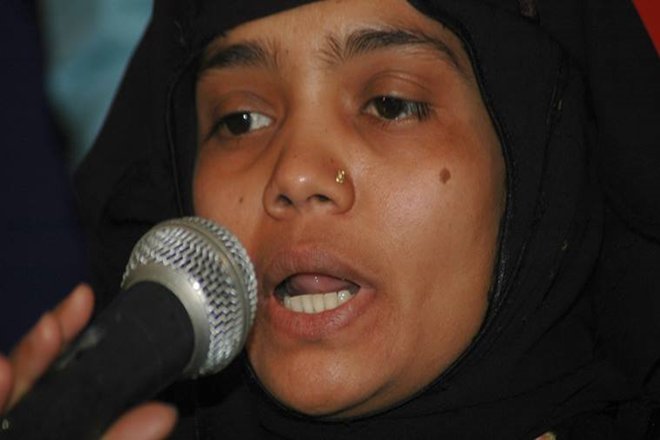 Bilkis Yakub Rasool was gangraped during the 2002 post-Godhra riots in Gujarat. Fourteen of her family members were killed, including her three-and-a-half-year-old daughter. She has been fighting for justice ever since, despite the threats and intimidation that came along the way. On Monday, October 23, the Supreme Court said that Bilkis Bano can seek higher compensation from the government by filing a special leave petition in a lower court. The apex court also questioned the Gujarat government on whether any departmental action had been taken against the five police personnel and two doctors who were found guilty of dereliction of duty and evidence tampering, and asked the state to submit a detailed reply within four weeks, ANI reported.

Bilkis Bano’s lawyer had earlier said in court that while she was seeking higher compensation, the policemen found guilty in the case were already back at work, Hindustan Times reported.

The Bombay high court on May 4 upheld the life sentence given by a trial court to 11 convicted in the Bilkis Bano gangrape and murder case from the 2002 Godhra riots. In addition, the court set aside the acquittal of others accused in the case, including Gujarat police officers and doctors from a government hospital. The court also directed each of the convicts to pay Rs 55,000, to go to Bilkis Bano as compensation. Bilkis Bano described this verdict as having “vindicated [her] truth and upheld [her] faith in the judiciary”. “I want justice, not revenge. I want my daughters to grow up in a safe India,” the gangrape survivor said after the high court’s decision.

The Wire presents a detailed timeline of the case.