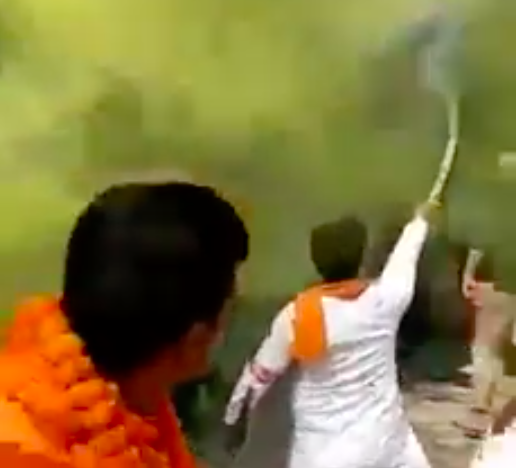 A screengrab from the video of the incident.

However, BJP leader and Anand Vihar councillor Gunjan Gupta, who flagged off the rally, thinks “nothing wrong” happened. “I did not take part in the bike rally and was present for the flagging off ceremony. There was no violence in the rally as the organisation conducting it is a disciplined outfit. It was a religious sentiment just like it happens in Muharram,” Indian Express quoted her as saying.

A police complaint has been filed by the imam Fazle Ilahi Masjid against Gupta and Mandawali councillor Shashi Chandana for allegedly inciting the crowd and escalating tensions, the newspaper reported. According to the complaint, the participants of the rally also shouted communal slogans.

According to Additional DCP (East) Jasmeet Singh, the rally was organised by the Akhand Bharat Morcha with police permission. “Some elements from the groups were involved in certain incidents regarding the mosques. Videos were also made of the incident. The local maulvi from Mandawali registered a complaint at Madhu Vihar police station, but they have also communicated that they do not want to pursue the matter,” Singh told Indian Express.

A video of the incident has now gone viral on social media. “They were brandishing swords and started issuing threats. This went on for 15 minutes as police stood by and watched,” Islam Khureshi, who was offering prayers at Madni Masjid when the rally stopped there, told Indian Express.

Several rallies organised by Hindutva groups have allegedly made it a point to go through Muslim colonies or neighbourhoods and shout anti-Pakistan or communal slogans there. In Kasganj, a ‘tiranga yatra’ organised on Republic Day reportedly sparked communal tensions by forcing its way through Muslim neighbourhoods, leading to violence in the area.

Recently, armed Ram Navami processions in Bengal and Bihar led to widespread clashes across the state. At least four people were killed in the violence.