Firoze Khan was appointed as an assistant professor to teach at the Sanskrit Vidya Dharma faculty on November 5. He hasn't been able to teach because of protests.

New Delhi: Days after a section of students at the Banaras Hindu University (BHU) broke out in protests against the appointment of a Muslim professor in the literature section of the Sanskrit Vidya Dharma department, the Sanskrit teacher resigned from his post.

Professor Firoze Khan will now be teaching Sanskrit at a different department of the same institution.

In a note to the protesting students, Kaushlendra Pandey, head of department, said that “in keeping with their sentiments and request, he was informing them that Khan had resigned from his post as assistant professor, literature section and thus all students are requested to participate in their studies and exams”. 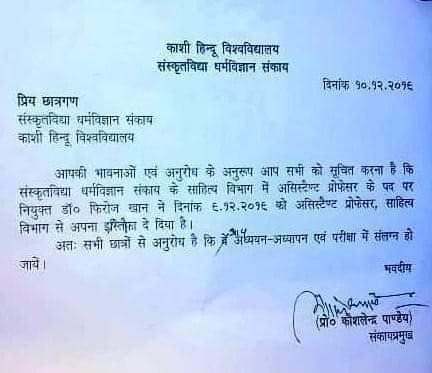 NDTV has reported that the move is apparently a compromise between BHU administration and protesting students, who had agitated for nearly a month against the appointment of a “non-Hindu professor” in the Sanskrit Vidya Dharma department. The protests were led by students from the Rashtriya Swayamsevak Sangh-affiliated Akhil Bharatiya Vidyarthi Parishad. Students had claimed that since the department intertwined the study of religion and literature, a non-Hindu teacher could not impart knowledge allegedly essential to Hindu rituals at the department.

Also read: In Protests Against Firoze Khan, the Undoing of India’s Glorious Tradition

“Professor Khan has resigned from here. He has expressed an interest in joining another wing in the university that teaches Sanskrit. He gave his resignation yesterday (Monday) evening,” professor Kaushalendra Pandey was quoted as having told NDTV.

According to PTI, Sanskrit Vidya Dharma Vigyan department dean Bindeswari Prasad Mishra confirmed that Khan has joined the Arts faculty of the university, where he will teach Sanskrit.

Although Khan was supported by some students and also the University administration, he has been unable to conduct classes, an entire month after his recruitment.

Also read: Firoze Khan, Sanskrit and the Case For Broadening the Mind

At BHU, Sanskrit is taught at three departments. The administration, according to NDTV, has claimed that Khan was interviewed by all three departments and had now ‘chosen’ to quit Vidya Dharma and teach at the Arts faculty. The panel that selected him, which includes professor Radhavallabh Tripathi, one of India’s most eminent Sanskrit scholars, has repeatedly said Khan was the most qualified candidate.

The students’ protests had taken a violent turn after they resorted to pelting stones at faculty members who had supported Khan’s appointment. A senior member of the Sanskrit Vidya Dharma faculty, professor Lal Shanti has alleged that he was pushed and had stones thrown at him.

“I was sitting in a classroom when some students barged in and started abusing me in a foul language. They asked me to stop supporting a Muslim’s appointment to the faculty. Some of the students then hurled stones at me… and shoved and pushed,” he told reporters.