Shoaib and his co-worker Rahul Dongar had gone to spray sanitiser in the city’s Jamalpura area on April 17 when a man accosted Shoaib. 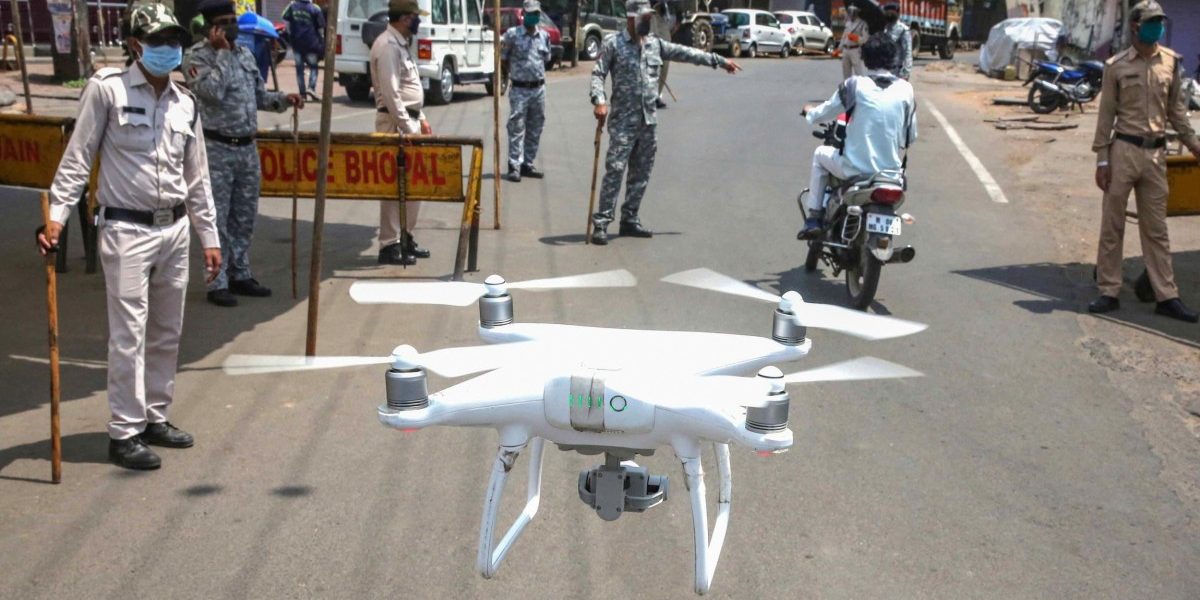 Police using a drone for surveillance during the lockdown in Bhopal. Photo: PTI

New Delhi: In what appears to be a direct fallout of false media reports, a Muslim civic worker in Bhopal was caught in a row when a person accused him of “intentionally spitting” to spread COVID-19.

Shoaib and his co-worker Rahul Dongar had gone to spray sanitiser in the city’s Jamalpura area on April 17 when a man accosted Shoaib, claiming that he had been spitting to spread the infection.

Rahul, who belongs to the Valmiki community, then came to his rescue and started filming the whole incident on his mobile phone. He is seen arguing with the person, urging him to produce evidence that Shoaib or he had been spitting in the area.

The man in a pink shirt goes on to say that he “cannot trust one particular community because of the various media reports that show them spitting in 50 different places and spreading coronavirus.”

Rahul captured the whole incident on a video. The man in the video persistently accuses them of spitting deliberately to spread the infection. “I have seen you spitting. I don’t trust you people. There is one community whom nobody trusts,” the man says, exposing his prejudice against Muslims.

Shoaib told The Quint that the man accosted him after realising he was a Muslim. “I was wearing a skull cap. The man realised I was a Muslim and came out of his house. He held me by my collar and started asking me for my Aadhar card. That is when Rahul intervened and started shooting the video,” he said.

Speaking to The Quint, Rahul said, “We had gone there to spray disinfectants on behalf of the Municipal Corporation. There were two other people who were accompanying me and we were just talking amongst each other. This other man (in pink) suddenly came out. All of us had our passes with us but he kept accusing us of trying to spread infection in the area.”

The video ends with Rahul saying that they won’t come to spray sanitiser in the area anymore. “We will stop all work here,” he says.

Both Shoaib and Rahul have been working as sanitation staff with the city’s municipal corporation for the last 12 years. They said they hadn’t encountered such aggressive communal discrimination before.

Ever since the Tablighi Jamaat cluster has been discovered, there has been a spurt of media reports that have attempted to falsely pin the blame of coronavirus spread on the whole Muslim community. This has not only communalised the pandemic but has fuelled distrust and suspicion against Muslims among large sections of Indians.

Similar incidents have also been reported from other areas of northern India. Muslim vendors dealing with essential commodities have been boycotted in many areas. In Meerut, Uttar Pradesh, a private nursing home had also barred Muslim patients in their premises without proof that they had tested negative for COVID-19.