The duo threatened and assaulted the man, and even called the woman's husband and questioned why he 'allows his wife to travel with a non-Muslim'. 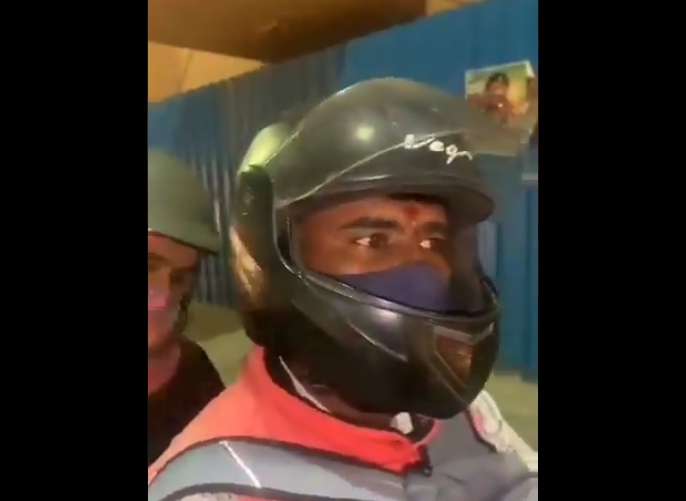 New Delhi: A Muslim woman and a Hindu man, who were travelling together in the Dairy Circle area of Bengaluru, were allegedly harassed and assaulted by two men on Friday, news reports said. The man was dropping his Muslim woman colleague home, when they were stopped by the duo and asked why the woman was travelling with a non-Muslim, especially in the “kind of times we live in”.

The duo was arrested on Saturday, a day after the after the video of the incident which was allegedly shot by the assaulters themselves, went viral on social media.

The video shows the two persons stopping the Hindu man and his Muslim woman colleague and questioning the reason they were travelling together. One of the men asks the woman in Urdu: “What’s your name? Aren’t you ashamed…? Don’t you know the kind of times we live in? Why do you behave like dogs and cats?”

The duo threatened and assaulted the man, and even called the woman’s husband and questioned why he “allows his wife to travel with a non-Muslim”.

The Bengaluru Police have arrested two persons in connection to a case of moral policing a hindu man for travelling with a muslim woman on bike. In the video, one of the accused can be heard threatening the woman's husband on call, for allowing her to go out. pic.twitter.com/6ecOFlxreL

The assaulters then forced the woman to get off her colleague’s bike and ride home in an autorickshaw.

According to NDTV, a case was registered at the SG Palya police station after the video went viral. “We arrested both the accused within 12 hours, acting swiftly,” said Shrinath Mahadev Joshi, deputy commissioner of police of Southeast Bengaluru told the news website.

Karnataka chief minister Basavaraj Bommai tweeted about the incident, applauding the police for nabbing the accused without delay.

In connection with the case of assault on a bike rider travelling alongwith a woman of different faith,@BlrCityPolice has acted swiftly, identified & secured 2 accused persons. A case is registered & legal action is initiated. My Govt. deals with such incidents with an iron hand.