Bengalis Bear the Brunt of Linguistic Polarisation Ahead of Assam Elections

As 72,000 more people in Assam join the ranks of ‘declared foreigners' on the eve of the state’s elections, the issue of ‘illegal foreigners’ has reared its head once again, leaving the fate of the Bengali community of the Barak Valley – both Hindu and Muslim – uncertain. 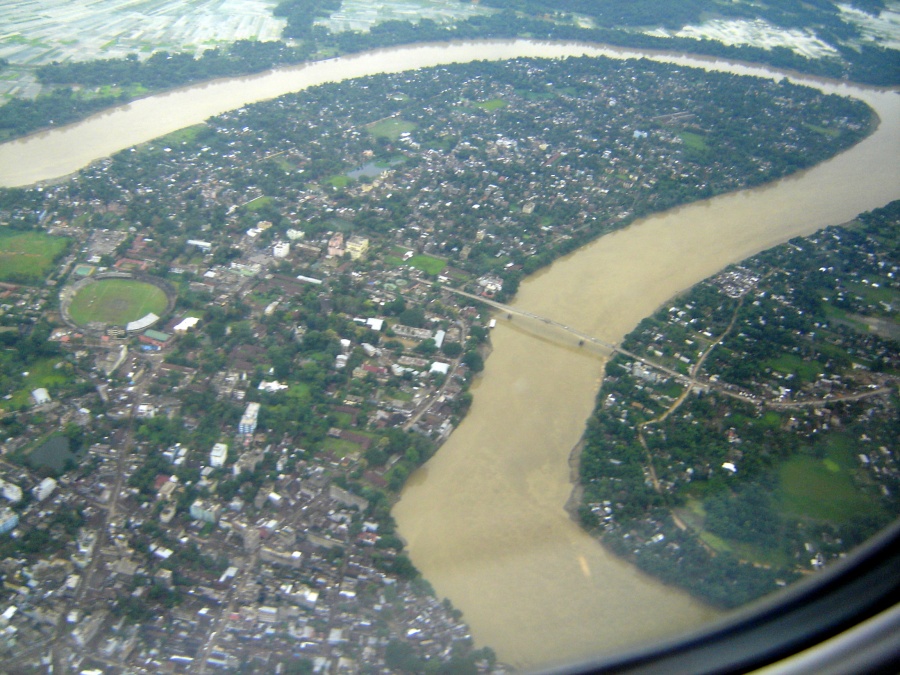 Silchar (Assam): Piles of black sewage from open drains composting in reeking heaps: this is the image one leaves with of Silchar, the main city of the Barak Valley in Assam. Why is there such squalor everywhere? As far as one can see, there are open drains everywhere – around homes, hospitals, schools, and people’s gardens.

In some places, these drains are a carpet of neon green, in others, they are covered with concrete, causing fewer people to fall into them – which they otherwise frequently do. There is a pestilence of mosquitoes, spawning underneath footbridges, as big and heavy as house flies, the kind that are easy to swat, and that smear the swatter scarlet. Mosquitoes generally don’t bother me, but these things are monstrous, embittered, and radicalised.

Silchar is at the heart of the monument of neglect that is the majority Bengali region along the Barak river. This protrusion is south of the better-off Brahmaputra Valley in the marginality that is Assam, which is deeply divided on the lines of ethnicity, and more so, language. If Assam is a marginality, the Barak Valley is a calamity; with Bangladesh to its west, it is the hole that the much-maligned ‘foreigners’ from that country escape into.

People here blunder about, earning low wages, wading through squelching garbage, falling sick and into drains, and living like Tiberius condemned to this, their miserable wayside valley (but why use a five-dollar allusion to describe anything in this 99 cent town?).

As for commerce, there are kiosks – rows and columns of them, and where there are pucca shops most are the size of large pigeon coups; the buildings look like monochrome Rubik’s cubes: small, uncomfortable, cookie-cut.

Everywhere, there is a uniform film of grey slough – on the edges of roads, on windowsills, on buses, even on people. Where are the clean spaces here, I wonder. Where do the rich people live? What do they do for fun, I wonder, as I walk past all the garishly dressed pigeon-chested mannequins with matted hair in the market area.

The Bengalis here suffer the strange fate of not quite being part of Assam. They did not have the advantages of their brethren in West Bengal who were richer, better educated and more influential nationally. Bengalis in Assam have had to agitate to retain their language at schools for their communities, and most aggressively, here, in the Barak valley, the seat of Bengali ‘dominance’. This valley demanded a central university of its own with English and Bengali (and not Assamese) as the languages of instruction, and got one only in 1994. It got a few more higher education institutions but there are still too few jobs to go round.

Everywhere in this state, Bengali identities are marred by Assamese nationalist pressures, and some migrants in upper Assam have accepted Assamese as the language of instruction at their community’s schools in order to ingratiate themselves.

But in Silchar, which is lower Assam, the signs are strictly in Bengali, and not Assamese.

Recently, 72,000 people in the state were declared foreigners to be seized and expelled from the country,  their names and addresses published in the press by Assam Police. These are individuals whose citizenship status could not be established due to a lack of papers to prove they were citizens of India before 1971 – though the cutoff year has been moved forward and back by several administrations.

These names were produced from the 1.43 lakh names that existed on blacklists as of 2014 – when Narendra Modi visited the region just before the general elections as a prime ministerial candidate. He said he would shut down ‘detention camps’ if he came to power and remove the D label from people’s names so they may cast their votes (for him).

In 2011, the Gauhati high court ordered that once referred to a foreigners’ tribunal, the superintendent of police (border) will have to ensure they do not vanish and are kept in a detention camp with access to the law to defend themselves. They are guilty until proven innocent. There are three such facilities in the state: at Silchar, Kokrajhar and Goalpara. Thanks to this rule, thousands are at risk of arrest.

These ‘detention camps’ are common jails where detainees – often the poorest of the poor – are treated at par with judicial detainees and criminals. The better off on the D list are not to be found at these facilities.

They do exist, though. A local journalist tells me BJP MLA from Silchar, Dilip Paul’s brother Pradip Paul appeared on the list. As did senior BJP leader Kabindra Purkayastha, a former Union minister with the 1998-99 Atal Bihari Vajpayee government.

The way that people have been declared D Voters is itself doubtful, “Suppose the police goes to someone’s house and for some reason they are not there, or if those at home – usually the poorer people – can’t answer properly, the absentee is marked ‘doubtful’,” said local Congress MP Sushmita Dev.

She said that in 2005, Sarbananda Sonwal – now the BJP’s chief ministerial candidate – went to the Supreme Court and had the Illegal Migrants (Determination by Tribunal) Act, 1983 struck down as being unconstitutional on the basis of two cases: “When that rule existed, if the administration suspected someone of being a foreigner, the burden of proof lay with the administration.”

“With the Foreigners Act now in its place, the burden of proof has reverted to the so-called suspected citizen. If you go to the border area of Cachar, my constituency, you’ll see that Bangladesh is just across the river, you know? So people end up in jail for going and seeing their relatives,” she said.

Indeed, at the Silchar facility a woman with her two children (five and seven years-old) has been jailed for doing exactly that. “The relatives are so scared they haven’t even tried to come see her,” a source at the jail in Silchar tells me.

Even in 2014, Modi’s generosity extended only to Hindu Bengalis, of course, who would be taken in as citizens because of religious persecution across the border. All others whose intentions were ‘nefarious’ would be deported, he had said.

Two years on, during last Sunday’s visit to the Barak valley, Modi, this time as prime minister, landed with his customary three-chopper entourage on a field in Hailakandi – a Muslim majority district – and said absolutely nothing about immigration. In any case, no bill regarding sheltering aggrieved Bangladeshi Hindus has yet been tabled in parliament though the home ministry has issued new rules making it easier for Hindu migrants from Bangladesh to obtain Indian citizenship.

“He is doing a flip flop on the issue,” says Sushmita. “When he goes to Assamese-dominated areas he says I’m not going to allow foreigners. When he comes to this valley, he sings a different song. This time basically he had nothing to say about the Bengalis.”

A Bengali local said: “Modi never said a word about D voters. He knows if he says anything about them, his Assamese vote bank will be totally cashed out.”

Politics in Assam can sometimes be alarmingly shallow: since the 1980s, it has almost completely been about where parties stood on the ‘foreigner issue’, an obsessive insecurity of losing land to acquisitive Bengali immigrants, with a shade of Islamophobia that finds validation in the belief that Muslims don’t treat their women as well as the Assamese do.

As a political card, it is genius: it unites (or divides) villagers, townsfolk, farmers, industrial workers, government officers, and, of course, politicians. Not surprisingly, much blood has been shed over the matter.

So what makes this issue so central to every election, and to Assamese politics itself?

It started with the death of Hiralal Patowary, the MP from Mangaldoi constituency in 1979. The Election Commission ordered fresh elections and a re-look at the state’s voter lists when electoral officers noticed a disproportionate increase of 70,000 names, suspected as being illegitimate. Of these, 45,000 claims were upheld by tribunals. These numbers shocked the public, and united opposition groups.

The nationalist All Assam Students’ Union (AASU) perceived this as a threat to Assam and the Assamese people, and stepped up to call for state-wide bandhs demanding the deportation of foreign nationals. They won support from all parties, barring the Congress, and some Muslim MLAs who, “opposed the revision of voters’ lists, for this would mean the deletion of…their supporters who had been installed illegally…to establish vote banks,” Sanjoy Hazarika writes in his 1994 book Strangers of the Mist.

The findings of the tribunals created renewed crises for the government, as strikes became full-fledged confrontations and agitators threatened to stall elections unless electoral rolls were revised. It was deemed that no party was fit to form a stable government and president’s rule was proclaimed.

Sham Lal Shakdher, then the election commissioner, was one of the first to express alarm at the rise in the number of voters. However, he capitulated to the Indira Gandhi government at the Centre, which wanted the elections to go ahead as planned. He said that voters would be checked after the elections as the process of establishing citizenship was a time-consuming one.

Tensions remained on the boil: in 1983, a mob of Lalung tribespeople in Nellie massacred 1700 Bengalis, both Hindu and Muslim. This stunned even the student nationalists, who were in some way responsible for creating the atmosphere of violence. Perhaps out of remorse, they negotiated down their obstinacy over the deportations of those who moved to Assam after 1971, i.e. mostly Hindu and Muslim Bengalis who settled in Assam following riots in East Pakistan.

In 1985, the Asom Gana Parishad (AGP) – formed by the leaders of the students’ movement – came to power. Many demands made by the agitators were turned down, none of the immigrants were immediately deported. Ironically, a voters’ list drawn from the fatal 1971 rolls was used for these elections.

Today, a third of Assam is Muslim. According to the 2011 census, nine out of 27 districts are Muslim-majority, compared to six in the 2001 census. Of the three main administrative areas in the Barak valley, Hailakandi and Karimganj are majority Muslim.

Sadhan Purkayastha, who runs the Citizen’s Rights Preservation Committee, said: “There are Assamese chauvinist groups who don’t want non-Assamese people in Assam at all. They want to oust them one way or another, send them to another state or to Bangladesh – wherever, whatever.”

What is it like being a Bengali in Assam, I ask Sushmita. “When the Assam agitation was going on, we didn’t notice anything – nobody dared do anything to us. But for the Bengalis in upper Assam it was difficult. Now in the census if they are asked what language they speak, they say Assamese. The politics that the BJP is doing is not of religion: it is linguistic communalism going on here.”

“If people have been living here for the past 45 years, how can you tell them you are outsiders? The law says you can be a naturalised citizen in 12 years. The AGP says you have to leave Assam even if you get citizenship. What is that supposed to mean? Why should we leave Assam? Even my mother came from Bangladesh during the partition. How many years do we have to keep hearing we are outsiders? How many times do we have to prove that we are Indian?”

The writing is on the wall. It is in Assamese, and Bengali communities have been told: ‘We don’t need you anymore.’

Note: The story has been edited to correctly identify the BJP leader who went to the Supreme Court on the migrants issue as Sarbananda Sonowal and not Himanta Biswa Sarma.

Divya Guha is an independent journalist based in Assam