Ahead of Ayodhya Verdict, Muslim Groups Appeal for Peace, Law and Order

According the AIMPLB, “A large section of press, mainly electronic media, is involved in rabble rousing and propaganda. Such coverage may help in spreading hatred and animosity among the citizens of the country.” 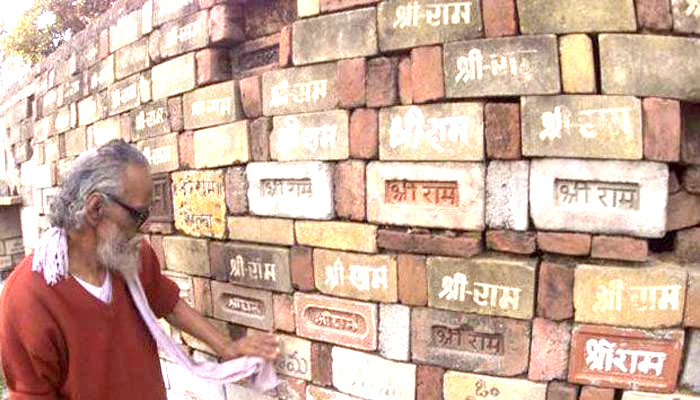 Bricks with 'Jai Shri Ram' written on them in Ayodhya. Photo: PTI

New Delhi: Ahead of the Ayodhya title dispute case verdict, several prominent Muslim organisations have appealed to the government as well as citizens of the country to maintain peace and law and order after the judgement is delivered.

Addressing a press conference at its headquarters in the national capital on Tuesday, Jamaat e Islami Hind (Jamaat) vice-president Muhammad Salim Engineer said, “Recently, the Central Advisory Council of Jamaat passed certain resolutions on the situation in the country. The Council has expressed concern over the situation post the Ayodhya verdict, the economy and the National Register of Citizens.”

According to a statement released by the organisation on Tuesday, post the Ayodhya verdict, “Jamaat wants the government to ensure that law and order situation remains under control and appealed to all citizens to cooperate with the authorities and desist from falling prey to provocation and emotional appeals to violence and arson.”

Also read: Ahead of Ayodhya Verdict, UP Police to ‘Scrutinise’ Social Media Posts

Earlier on Saturday, according a report by PTI, in a closed-door meeting convened by Navaid Hamid, president of the All India Muslim Majlis-e-Mushawarat, participants resolved to maintain peace and harmony at all cost after the verdict in the Ayodhya case.

“We appeal to all countrymen to face the situation with patience and endurance and avoid any kind of provocation and incitement and also stick to peace and optimism whatever be the circumstances,” said the resolution passed at the meeting.

Meanwhile, on Tuesday, the All India Muslim Personal Law Board (AIMPLB) released a statement asking media organisations to maintain restraint while reporting on the upcoming verdict. “We expect our vibrant media to follow and abide by the basic principles of neutrality and also consider the orders passed by Supreme Court to this effect and further follow the advisory issued by the self regulating institution of media.”

Referring to several court orders relating to media reporting and a recent advisory by the News and Broadcasting Standards Association (NBSA), the statement noted that the issue “must be reported in the press from a legal point of view without any adjective, personal opinion, prejudice, bias or emotional narrative in the garb of freedom of press.”

The statement also notes that, “We need to point out at this stage that recently, except for some quarters of the press who have been fair, very large section has started reporting the Ayodhya case in a manner which violated the basic principle of neutrality in reporting of an issue.”

According the AIMPLB, “A large section of press, mainly electronic media, is involved in rabble rousing and propaganda. Such coverage may help in spreading hatred and animosity among the citizens of the country.”

Also read: Will Ayodhya Finally Get the Peace Its People Deserve?

Affirming press freedom, the statement further read, “We have always been in the support of the freedom of press and shall take all steps which may ensure freedom of press. However, in a multi-cultural and multi-religious society like ours, media has also an important duty to play in protecting the rights of minorities, dalits, adivasis, women and all suppressed classes.”

The Supreme Court on October 16 concluded hearing the case and reserved it judgment. A five-judge constitution bench, headed by Chief Justice Ranjan Gogoi, heard the case for 40 days and is likely to deliver its judgement any day before November 17.