Innocent, Underage, Injured: The Story of Muslims Held After Anti-CAA Protests in Aurangabad

State police records say that around 1,550 people were arrested in different parts of Bihar for protests against CAA and NRC. 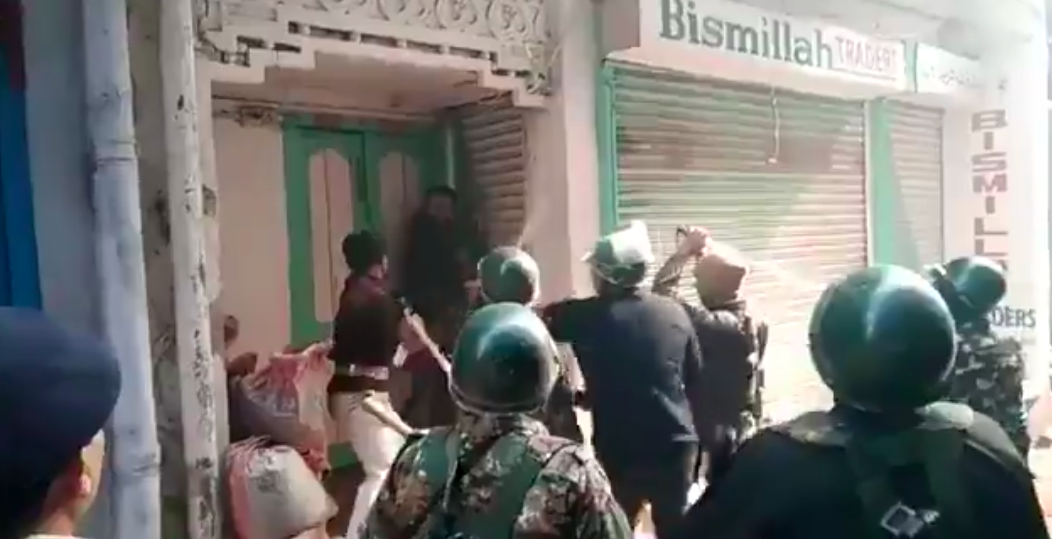 Aurangabad, Bihar: The contentious Citizenship Amendment Act (CAA) and National Register of Citizens (NRC) have led to a volatile situation nationwide. In Bihar’s Aurangabad, a brutal police crackdown has led to allegations of instances where Muslims were arbitrarily arrested.

On December 21, protests turned violent in the city during a Bihar bandh called by Rashtriya Janata Dal (RJD). Protesters threw stones and sticks at the police when the forces attempted to stop them from rallying. Police retaliated with tear gas. Protesters, on the other hand, stormed the streets, disrupting rail and road traffic. Instances of violence were reported from New Kazi Mollah, Shahganj, Pathan Toli, Azad Nagar, Ismail Toli and Farooqui Mollah areas of the town.

However, the violence was not one-sided.

Video clips making rounds on social media have shown Bihar Police in Aurangabad town vandalising cars and bikes. Reports claim 45 men were arrested in Aurangabad town since December 21 in cases of stone pelting. It is alleged that many of them were innocent.

Shahbaz Nawab (30) was arrested by police on the afternoon of December 21 from Shahganj Colony of Aurangabad town. Speaking to The Wire, his elder brother Sajib said Shahbaz was not among the stone pelters.

Sajib said he got a call from his mother on December 21 and was informed about his brother’s arrest. He was held while parking their car beside their own house. “My mother was crying over the phone and saying that Shahbaz was brutally beaten. My father, Feroz Adil, begged them to spare him as he had not committed any crimes,” he said.

Shahbaz’s name is listed at number 25 in the FIR, even though his family had approached police with visual evidence. His family fear there are many others like him.

Sajib said that local media was prompt in publishing his brother’s photos as those of a stone pelter’s. “Many Hindu families in Shahganj expressed anguish but that did not end our sorrows,” said Sajib.

Sixteen-year-old Masood Faisal’s story is similar. Faisal, the son of Mehboob Alam, went missing after attending his private tuition classes in Qureshi Nagar on the day of the violence.

Faisal’s uncle Mahmood Alam who is a computer teacher, told The Wire that on his way home in Pathan Toli Faisal found police troops with batons and tear gas shells. “He was forcibly handpicked. Before arrest he was on call with his father, this can be checked by tracing his call records. On ETV Bihar news channel, we saw visuals of him being beaten brutally by the police,” said Mahmood. 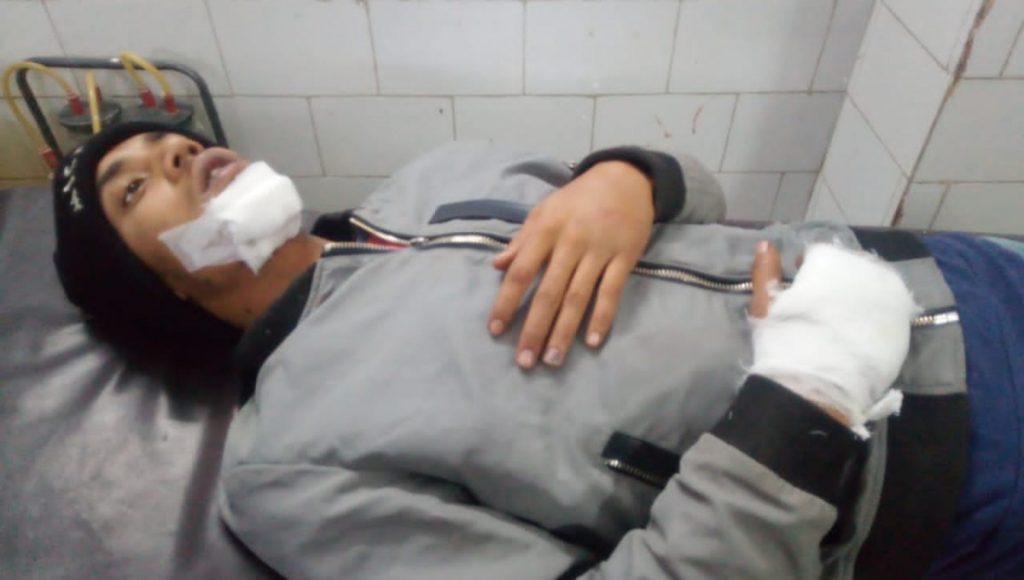 He adds further that his nephew was badly manhandled and that his left wrist has been fractured. Torture marks on his body can also be seen, he said. “He was admitted at the Sadar hospital. Immediately after confirmation I rushed to the police station and saw him lying unconscious with wounds,” he added. 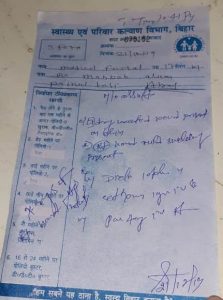 Mahmood said even though there is no evidence of misdeed against Faisal, he is still in police custody.

Mohammad Inam-ul-Rab, who runs a cyber café in Islam Toli of Aurangabad town recounts a similar experience. In conversation with The Wire, Mohammad Inam said, “During the afternoon hours of statewide strike, a few policemen came down to us near our home and randomly started beating us. On resisting, they became more aggressive and pushed us inside our houses citing occurrence of violence as reason. After two hours, at 5 pm, 50-60 policemen barged into my residence and start breaking our handpump and beating on the door of our house. They pushed my sister, mother and aunt, and were asking for those miscreants who were involved in violence and stone pelting.”

Police allegedly continued vandalising Inam’s house, without a lady constable, and only stopped after arresting his 12-year-old brother Saddam. “In the FIR, police wrote his age as ’19’,” he said.

Also read: CAA: The Peaceful Protests by Muslims That No One Is Talking About

The Wire verified the details and found Saddam Hussain’s age to be 12 years as per his school certificate and Aadhaar card details. 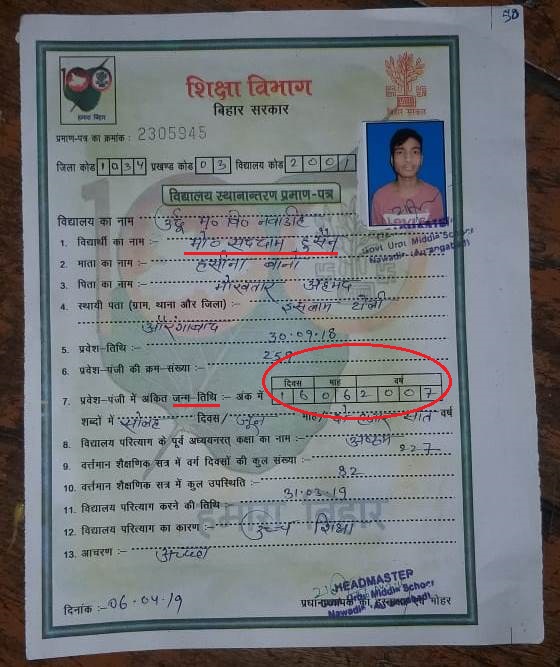 Four members were arrested from Inam’s house which include his uncle, brother-in-law and two younger brothers.

As per Aurangabad town police station sub-inspector (SI) Ravi Bhushan, on the day of protests, a crowd of 100-150 people entered through Navadih area, headed by Sikandar Hayat, a ward member.

Bhushan said that the crowd stopped at one Pandey Book House, vandalised nearby shops and assaulted their shopkeepers. Seeing this, he said, “He rushed to the spot where he saw the crowd pelting stones at the forces.”

“Arrests were made and FIRs were registered against 84 miscreants and a few them were unidentified, and booked on charges of stone pelting and damaging of public property,” he said. In addition to this, police also claimed that town’s Jama Masjid area witnessed heavy stone pelting against which tear gas shells were used.

Sources in the office of the Aurangabad District Magistrate (DM) Rahul Ranjan Mahiwal said that  more than 40 persons have been arrested for stone pelting. The attack on security personnel was pre-planned as a heap of bricks, bundles of knives and lathis were allegedly recovered from one of the colonies, the sources said. Half a dozen police personnel allegedly suffered injuries.

Last year, Aurangabad was in the headlines for communal riots. A couple of days before December 21, there were anti-citizenship law protests but no violence was reported. The alleged targeting of Muslim youth by Bihar police has become controversial.

State police records say that around 1,550 people were arrested in different parts of Bihar including Muzaffarpur, Gopalganj, Bhagalpur, Patna, Phulwarisharif, and Siwan for alleged violence during protests against CAA-NRC.