More than 730,000 Rohingya Muslims have fled to neighbouring Bangladesh since a 2017 crackdown by Myanmar's military. 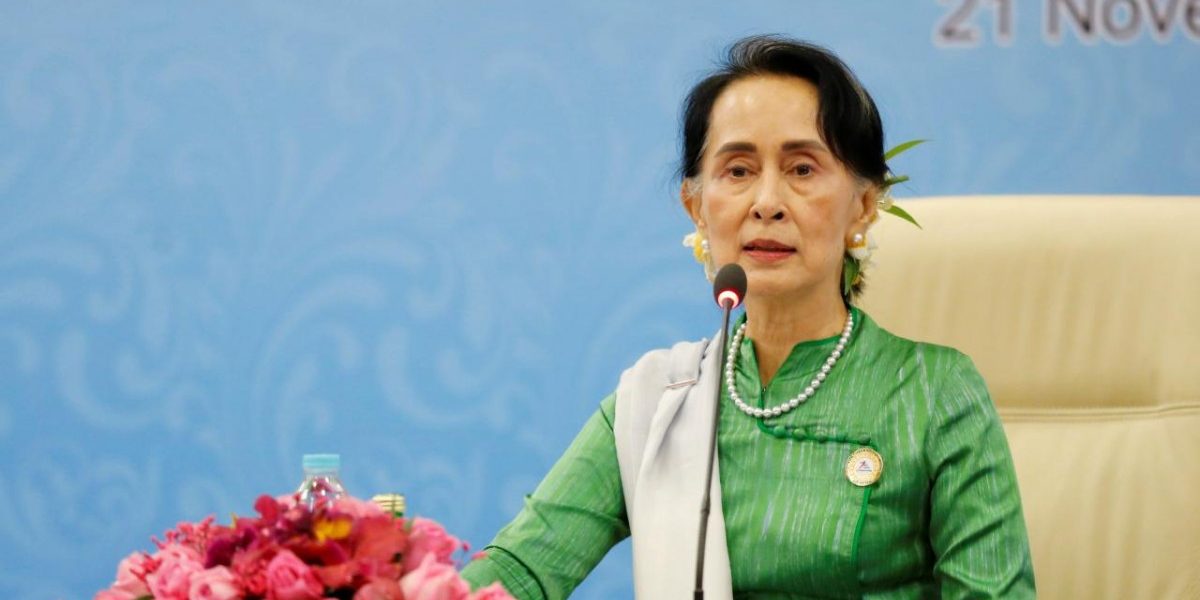 Suu Kyi has curtailed her overseas travel as calls for accountability have grown since some 700,000 Rohingya fled the country last year. Photo: Reuters/Stringer

Yangon: Aung San Suu Kyi will appear before the International Court of Justice (ICJ) to contest a case filed by Gambia accusing Myanmar of genocide against its Rohingya Muslim minority, her government said on Wednesday.

More than 730,000 Rohingya Muslims have fled to neighbouring Bangladesh since a 2017 crackdown by Myanmar’s military, which U.N. investigators say was carried out with “genocidal intent”. Buddhist majority Myanmar denies accusations of genocide.

Gambia, a tiny, mainly Muslim West African state, lodged its lawsuit after winning the support of the 57-nation Organisation for Islamic Cooperation (OIC). Only a state can file a case against another state at the ICJ.

“Myanmar has retained prominent international lawyers to contest the case submitted by Gambia,” the ministry for state counselor Suu Kyi’s office said in a Facebook post.

“The State Counselor, in her capacity as Union Minister for Foreign Affairs, will lead a team to the Hague, Netherlands, to defend the national interest of Myanmar at the ICJ,” it said, giving no further details.

A spokesman for Suu Kyi’s party, the National League for Democracy, said she had decided to take on the case herself.

“They accused () Aung San Suu Kyi of failing to speak out about human rights violations,” spokesman Myo Nyunt said. “She decided to face the lawsuit by herself.”

Both Gambia and Myanmar are signatories to the 1948 Genocide Convention, which not only prohibits states from committing genocide but also compels all signatory states to prevent and punish the crime of genocide.

The ICJ has said it will hold the first public hearings in the case on Dec. 10 to 12. The court has no means to enforce any of its rulings.

Suu Kyi, a longtime democracy activist who won the Nobel peace prize for her defiance of the military junta, swept to power in Myanmar after a landslide election win in 2015 that ushered in the country’s first fully civilian government in half a century.

But her reputation has been sullied by her response to the plight of the Rohingya, a persecuted Muslim minority living in the western Rakhine state.

While almost a million now live in squalor in Bangladeshi refugee camps, several hundred thousand remain inside Myanmar, confined to camps and villages in apartheid-like conditions.

She has publicly blamed the crisis on Rohingya “terrorists”, referring to militants who attacked security posts in August 2017, prompting the army crackdown, and has branded reports of atrocities, including gang-rapes and mass killings, as fake news.

“Rohingya globally, including refugees in Bangladesh, support the case at the ICJ and want justice for their people.”

The ICJ, established in 1946, settles disputes between states, and individuals cannot sue or be sued there.

But Myanmar is facing a wave of international pressure from courts across the world, and other cases involve individual criminal responsibility.

Days after Gambia filed its case at the ICJ, Rohingya and Latin American human rights groups submitted a lawsuit in Argentina under “universal jurisdiction”, a legal premise that deems some crimes as so horrific that they can be tried anywhere in the world.

Suu Kyi was named in that lawsuit, which demands that top military and civilian leaders be sanctioned over the “existential threat” faced by the Rohingya minority.

Separately, the International Criminal Court has authorised a full investigation into crimes committed against the Rohingya in neighbouring Bangladesh. Myanmar does not recognise the ICC but Bangladesh accepts its jurisdiction.