The district administration sought the army's help after clashes broke out between members of two communities when some people protested against prayers being held on a road in front of a mosque. Hailakandi: The army has been called in to maintain peace after curfew was clamped in Hailakandi district of Assam on Friday following a communal clash that left one person dead and 14 others injured, officials said.

Chief minister Sarbananda Sonowal has ordered an inquiry into the incident.

Deputy commissioner Keerthi Jalli said the curfew was clamped from 6 pm in the district till 7 pm of May 12 as some groups were trying to “indulge in violence and there is the apprehension of grave risk and danger to human life and property”.

Earlier, an indefinite curfew was enforced only in Hailakandi town from 1 pm following the clash. 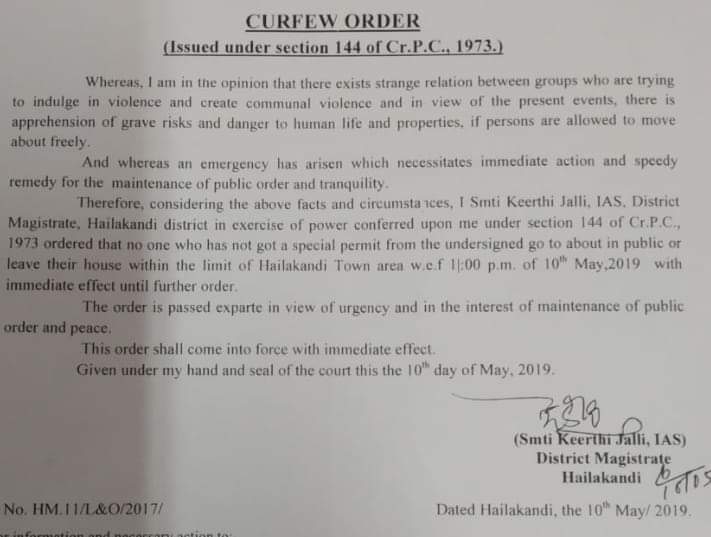 The district administration sought the army’s help after clashes broke out between members of two communities when some people protested against prayers being held on a road in front of a mosque, the officials said.

At least 15 people were injured, three of them critically, in the clash and more than 15 vehicles damaged and 12 shops vandalised and set on fire in different parts of the town, they said.

Official sources said one of the injured died at Silchar Medical College and Hospital at night.

He has been identified as Jashim Uddin, 28, they added.

Trouble started when a group of people decided to hold the Friday noon prayers on the road, located at Kali Bari point of the town, in protest against some motorcycles being damaged by people belonging to another community, the officials said.

Police attempted to disperse the protestors by firing in the air in which 15 people were injured, they said.

Jalli said a tense situation arose which ”necessitated immediate and speedy action for the maintenance of public peace and tranquility”.

Appealing to the people not to spread rumours, she said: “the administration was doing everything to maintain peace and security of the people”.

“It is not a communal clash but two-three miscreants have created all this,” Jalli said.

She said the situation was under control with the deployment of personnel from the CRPF and the Assam Rifles.

Chief minister Sonowal has directed additional chief secretary Rajiv Bora to conduct an inquiry into the incident and submit a report to the government.

The chief minister while reviewing the situation also directed the district administration to take all necessary measures to maintain law and order.

Sonowal also called on the people of the state to maintain peace and harmony and not to allow the divisive forces to create unrest.

He warned of strict action against forces inimical to the interests of the state and its people.

As per the directions of the chief minister, Environment & Forest Minister Parimal Suklabaidya, ADGP Mukesh Agarwalla and Commissioner of Barak Valley Region Anuwaruddin Choudhury are already headed to Hailakandi to take stock of the situation, a government release said.