While right-wing media platforms and influencers claimed that the people calling cricketer Arshdeep Singh a 'Khalistani' online were from Pakistan, Alt News's investigation into the tweets has proved otherwise. Indian cricketer Arshdeep Singh was trolled online after dropping a catch in a match against Pakistan, with many trolls calling him 'Khalistani'. Photo: Facebook/arshhey

On September 4, Pakistan defeated India by five wickets in the Super 4 Match of the 2022 Asia Cup. At a certain point in the game, Pakistan’s score was 151 runs with the target for victory being 182. Pakistani cricketer Asif Ali was batting, with India in dire need of a wicket. Indian bowler Ravi Bishnoi was bowling the 18th over.

On the third ball of this over, Asif Ali miscued a shot offering a chance at short third man and the fielder, Arshdeep Singh, missed the catch. Following this, social media users started trolling Arshdeep. Several accounts abused him and also called him ‘Khalistani’. 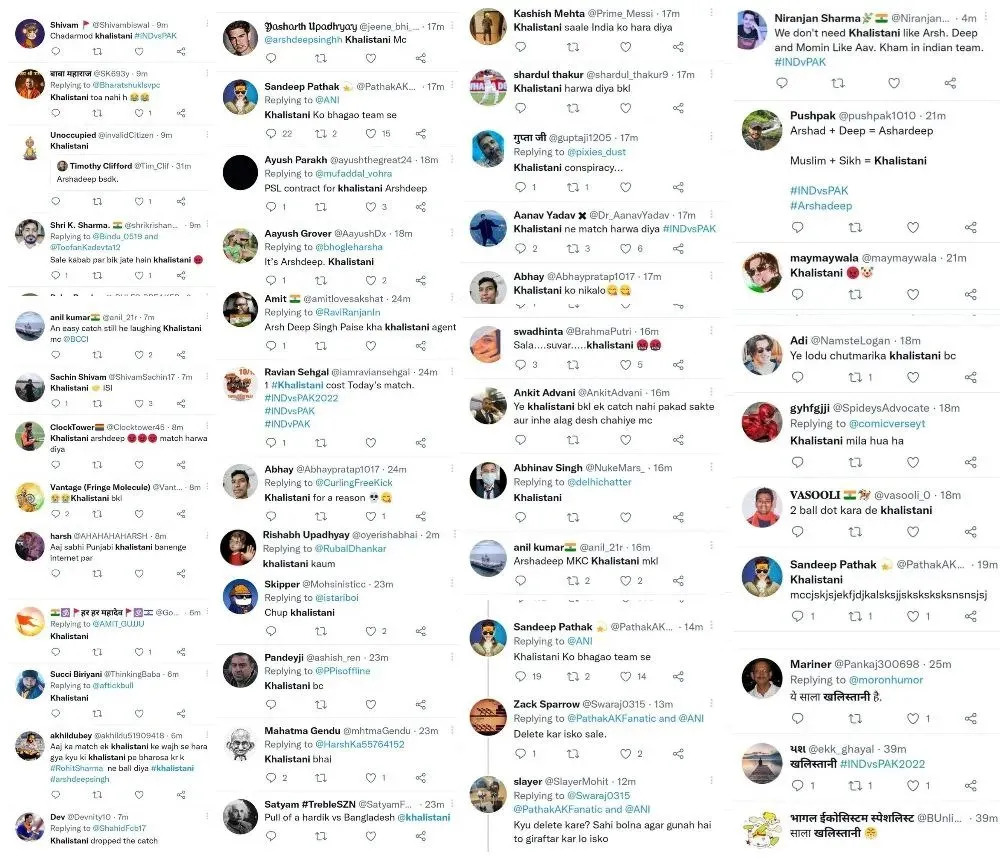 Punjab Kings tweeted in support of Arshdeep, saying, “We are proud of you Arsh”. Responding to this, right wing influencer @MrSinha_ wrote that Punjab Kings were cheering for those responsible for the defeat of the Indian cricket team and questioned whether ‘Khalistanis’ were running the handle. He later deleted the tweet (Archived link). It is worth noting that that Prime Minister Narendra Modi follows this account. 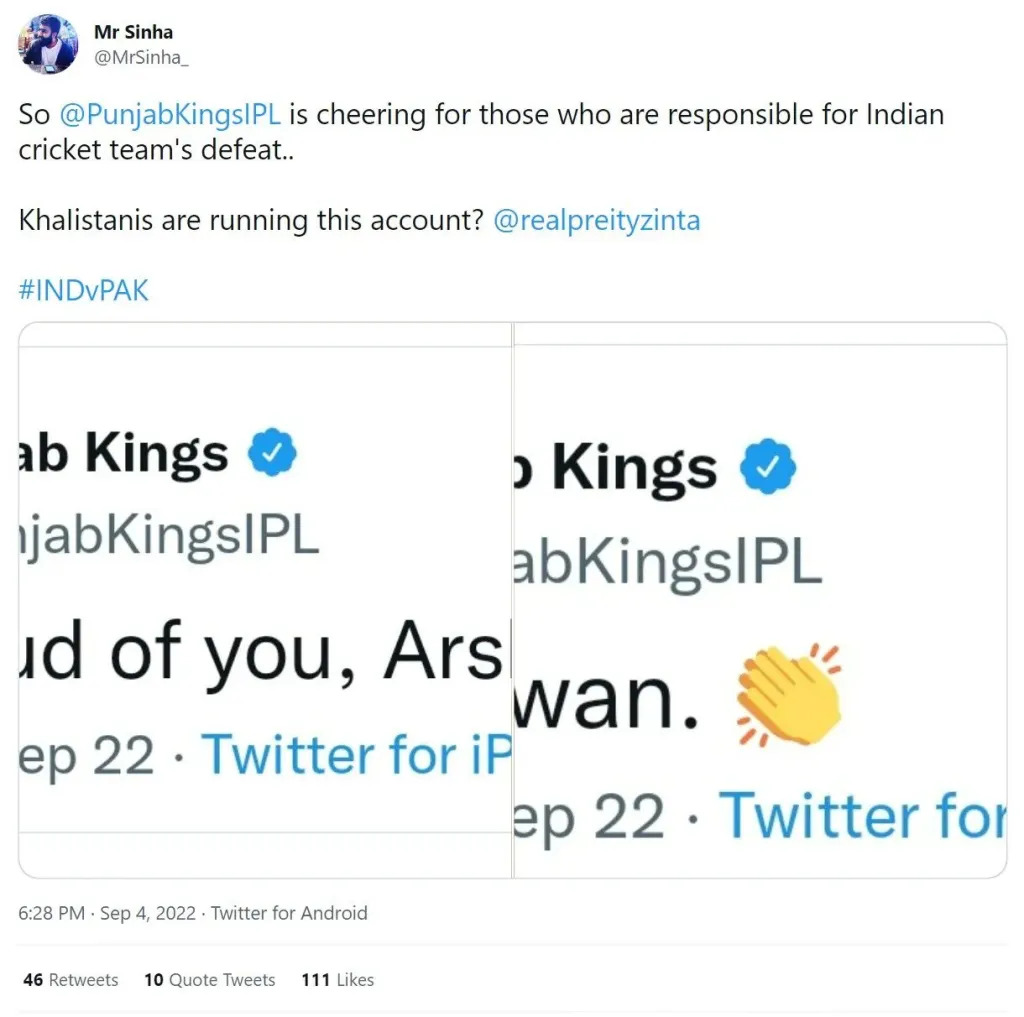 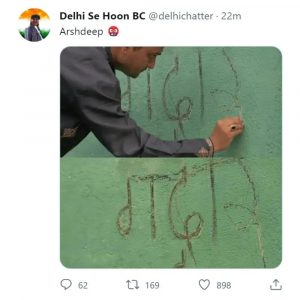 A Twitter handle with the display name Shimorekato hurled abuses at Arsheep Singh, calling him a ‘Khalistani’ and asking him to return to Canada. (Archived link) 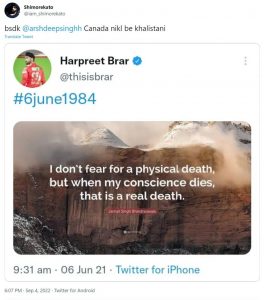 Celebrities come out in support of Arshdeep

Amid all the controversy, several celebrities tweeted in support of Arshdeep. Former Indian cricketer and Rajya Sabha MP Harbhajan Singh wrote in a tweet, “Stop criticizing Arshdeep, no player deliberately drops catches. We are proud of our boys, Pakistan played well. Shame on such people who are humiliating Arshdeep and the Indian team by saying cheap things on this platform.”

Stop criticising young @arshdeepsinghh No one drop the catch purposely..we are proud of our 🇮🇳 boys .. Pakistan played better.. shame on such people who r putting our own guys down by saying cheap things on this platform bout arsh and team.. Arsh is GOLD🇮🇳

Indian cricketer Irfan Pathan tweeted and wrote, “Arshdeep has a strong character. Virat Kohli stated that under pressure anyone can make mistakes, and it was a big match. You learn from them so that the next time the opportunity comes, you can look forward to taking such important catches.

Also read: When Political Yogis Take the Knee, They Reveal the Perverse Politics of Indian Cricket

Did only Pakistani handles call Arshdeep a ‘Khalistani’?

Citing government sources, CNN News18 editor Pallavi Ghosh wrote, “The series of tweets trashing Arshdeep Singh are being checked and traced. For now, it looks like fake accounts from Pakistan, this should not be amplified.” (Archived link)

Kanchan Gupta, senior advisor, Ministry of Information and Broadcasting, retweeted a thread on how Pakistani handles targeted Arshdeep Singh with a sinister motive and claimed these tweets were being forwarded by Alt News co-founder Mohammad Zubair to sully India’s image. (Archived link)

Thread on how Pakistani handles targeted Arshdeep Singh with a sinister motive, and how these tweets were amplified by @zoo_bear to sully India’s image. https://t.co/rUzbbiJwS2

Right-wing influencer Anshul Saxena posted screenshots of tweets by Pakistani accounts claiming that Pakistan was running its Khalistani propaganda and calling Arshdeep Khalistani. At the end of the thread, Saxena added that it was clear that Pakistan’s accounts started targeting Arshdeep Singh by calling him ‘Khalistani’. But the sad thing is that some people of India also got caught in the trap and trolled Arshdeep in the same way. (Archived link)

7) All these accounts are from Pakistan. They are still targeting Arshdeep Singh & calling him Khalistani. pic.twitter.com/Iw9W0BjS6e

The truth behind the handles calling Arshdeep ‘Khalistani’

We first searched for the tweets seen in the viral screenshots and found that some of these were still visible on Twitter. The pattern of the tweets, retweets, and likes of some of these Twitter accounts indicate that they are Indian. After the screenshot went viral, many locked or deactivated their accounts. However, the archived links of the tweets and the handles sharing them are given below. Below are some of the tweets made by the accounts which appear to be run by Indian users.

When we examined Shivam’s Twitter profile, we discovered this was an Indian handle which often tweeted in support of Gems of Bollywood; BJP leaders Kapil Mishra and Tajinderpal Singh Bagga; right-wing influencer Anshul Saxena; and other right wing accounts. It is clear from this that this account belongs to the Indian user. Shivam deactivated his account after the screenshot of the tweet went viral. However, the archived version of Shivam’s profile can be accessed here. When we searched the Twitter profile of ClockTower, we found that this user had wished the president of Bharatiya Janata Yuva Morcha, Mumbai, Tajinder Tiwana on his birthday. Along with this, the user had tweeted about celebrations of a Hindu festival when the Eknath Shinde government was formed in Maharashtra.

Replying to Harbhajan Singh’s take on Arshdeep, this user had written that they had a right to criticise him since he was an Indian player. Apart from this, the tweet posted on August 29 about Pakistan’s victory clearly indicates that this is an Indian account. (Archived link) Twitter user Pradeep had abused Arshdeep in a tweet after missing the catch, calling him ‘Khalistani’. (Archived link)

We examined Pradeep’s Twitter account and found that this user had also written that Indian cricketer Rishabh Pant should not be allowed to play in T20 matches. Apart from this, there are many tweets on this user’s profile in support of M.S. Dhoni, Virat Kohli, and the Indian cricket team. On February 5, 2021, this user had talked about using a Jio SIM card while tweeting, which confirms that they are from India. An archived version of Pradeep’s profile is available here. 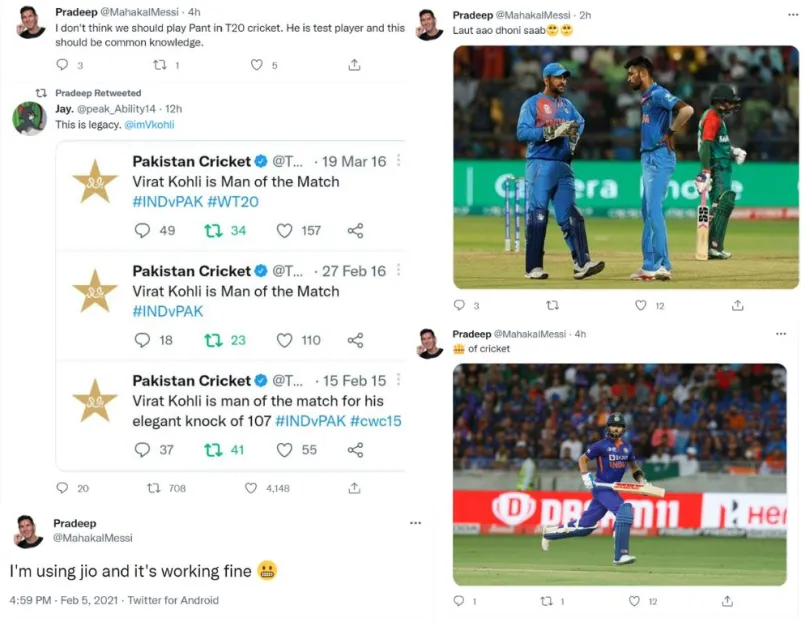 After examining Lakshman’s tweets, we found that he had made several tweets related to Indian politics in the past as well. One of these stated that peace would be established in Kashmir only when members of a single religious community, i.e. the Hindus, would be living there. The archived version of Lakshman’s profile can be found here. When we checked Rishabh’s Twitter account, we found that this user had retweeted posts made by several right-wing influencers. In fact, the user had earlier posted several tweets similar to the one in question. After Nupur Sharma’s suspension by the BJP, Upadhyay tweeted in her support and opposed the BJP in the same tweet. This makes it evident that the handle belongs to an Indian user. The archived version of Rishabh’s profile can be found here. Arshdeep dropped the catch around 11:05 pm. Using epoch time on Twitter, we checked the tweets containing the keywords ‘Khalistan’ and ‘Khalistani’ posted between 11:05 pm and 11:10 pm Indian Standard Time, and we observed a certain pattern. Within this time frame, most of the accounts that used the word ‘Khalistani‘ seem to be Indian.

At the same time, most of the accounts using the word ‘Khalistan‘ appeared to be Pakistani, among them was Pakistani journalist Wajahat Saeed Khan. This tweet was also posted in the same time frame. After the catch was dropped, Pakistani accounts were mocking Arshdeep by linking him to Khalistan, while Indian accounts were abusing Arshdeep by calling him a ‘Khalistani’ and using other cuss words. We have hyperlinked the archived search results of both the keywords (Khalistan and Khalistani) above. Both archives contain tweets made immediately after the catch. Readers can scroll down after clicking on the archive link to see all the tweets made at that time. Some of the tweets containing the keyword ‘Khalistani’ along with timestamps are given in the collage below, which you can also access by clicking here. 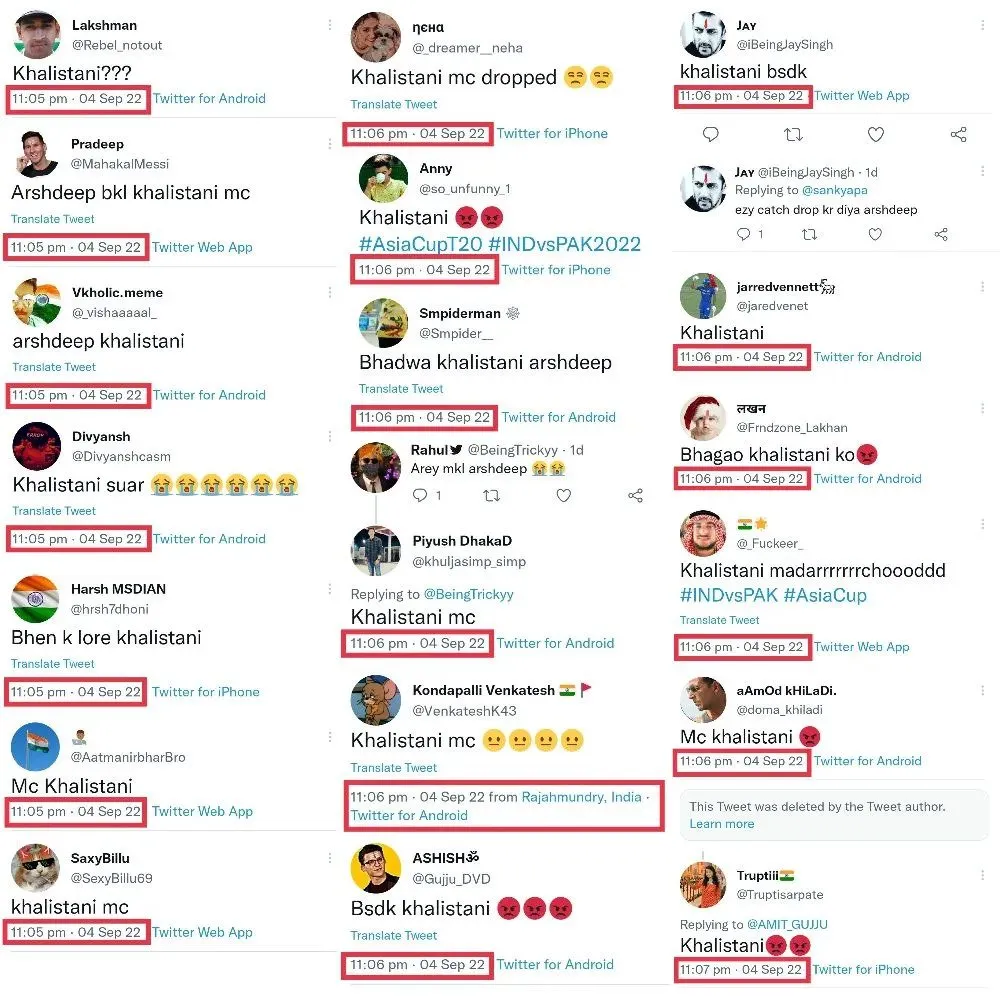