In UP, Modi Follows Up on Yogi Govt's Attempts to Shift Focus to Destruction of Property

He said he wanted to tell those who damaged public property "not to forget that rights and duties go hand in hand". 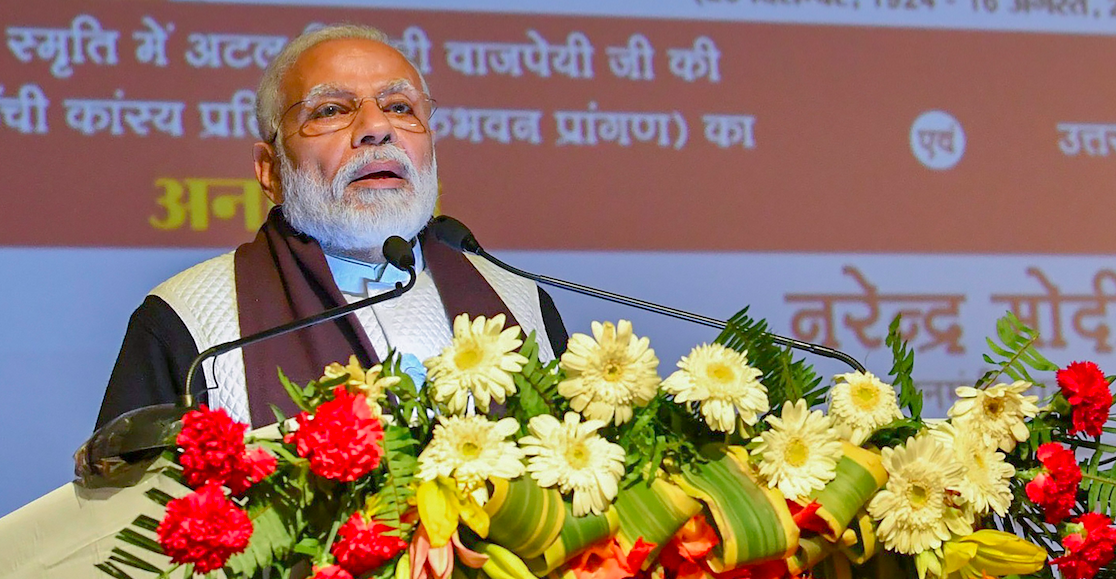 The Wire Staff
Communalism
Government
Politics
Rights
25/Dec/2019
Lucknow: Like Uttar Pradesh chief minister Yogi Adityanath, Prime Minister Narendra Modi on Wednesday sought to turn the narrative of police brutality during the anti-Citizenship (Amendment )Act protests on to those who “damaged public property” during protests in the state.

Addressing a gathering in Lucknow after unveiling a statue of former prime minister Atal Bihari Vajpayee at the Lok Bhawan there, he said protesters should understand that rights and duties go hand in hand.

Modi had earlier sought to dispel what he said were false notions on the National Register of Citizens, at a rally on Sunday, in New Delhi. The speech was thoroughly criticised after his claim that there are no detention centres being made ran foul of basic fact checks.

“They (the vandals) should ask themselves was it right. Whatever was torched, was it not of their child’s use? What has happened to those common people and policemen who got injured?” Modi asked on Wednesday.

He said he wanted to tell those who damaged public property “not to forget that rights and duties go hand in hand”.

In addition to rights, let us give as much importance to our duties as citizens. pic.twitter.com/3L6xdIsFOd

The Adityanath government has sealed more than 60 shops in Muzaffarnagar in an effort to exact fines for alleged damage to public property, according to reports. The chief minister had earlier warned that he would exact “revenge” on those who destroyed public properties by taking away their private properties.

More than 15 people were killed in police violence during protests against the Citizenship (Amendment) Act in several Uttar Pradesh districts. PTI has reported that 63 police personnel were injured and state-owned property was damaged.

Modi has not commented on the number of casualties, or the crackdown in the state.

Also read: Video Contradicts UP Police’s Claim of Not a ‘Single Bullet’ Fired at Anti-CAA Protesters

Referring to Article 370, Modi said it was an “old disease” and it was resolved peacefully.

“How old a disease was Article 370. How difficult it appeared. But it was our responsibility as to how to face such difficult challenges. And, it was done easily. Sabki dhaarna ye choor choor ho gaya (‘everyone’s perception was smashed’),” he said.

On the Citizenship (Amendment) Act, Modi said giving citizenship to those who came to India from Pakistan, Bangladesh and Afghanistan to “save the dignity of their daughters”, was another problem whose solution was found by 130 crore Indians.

“With this self-confidence, Hindustanis are entering a new decade. Whatever is left to be done, all Indians are trying to find a solution,” he said.