And Quiet Flows the Kopili

Subasri Krishnan's new film about the massacre of 2000 Muslims at Nellie, Assam in 1983 is a haunting tale that poses difficult questions about the denial of justice and meaningful citizenship in India. 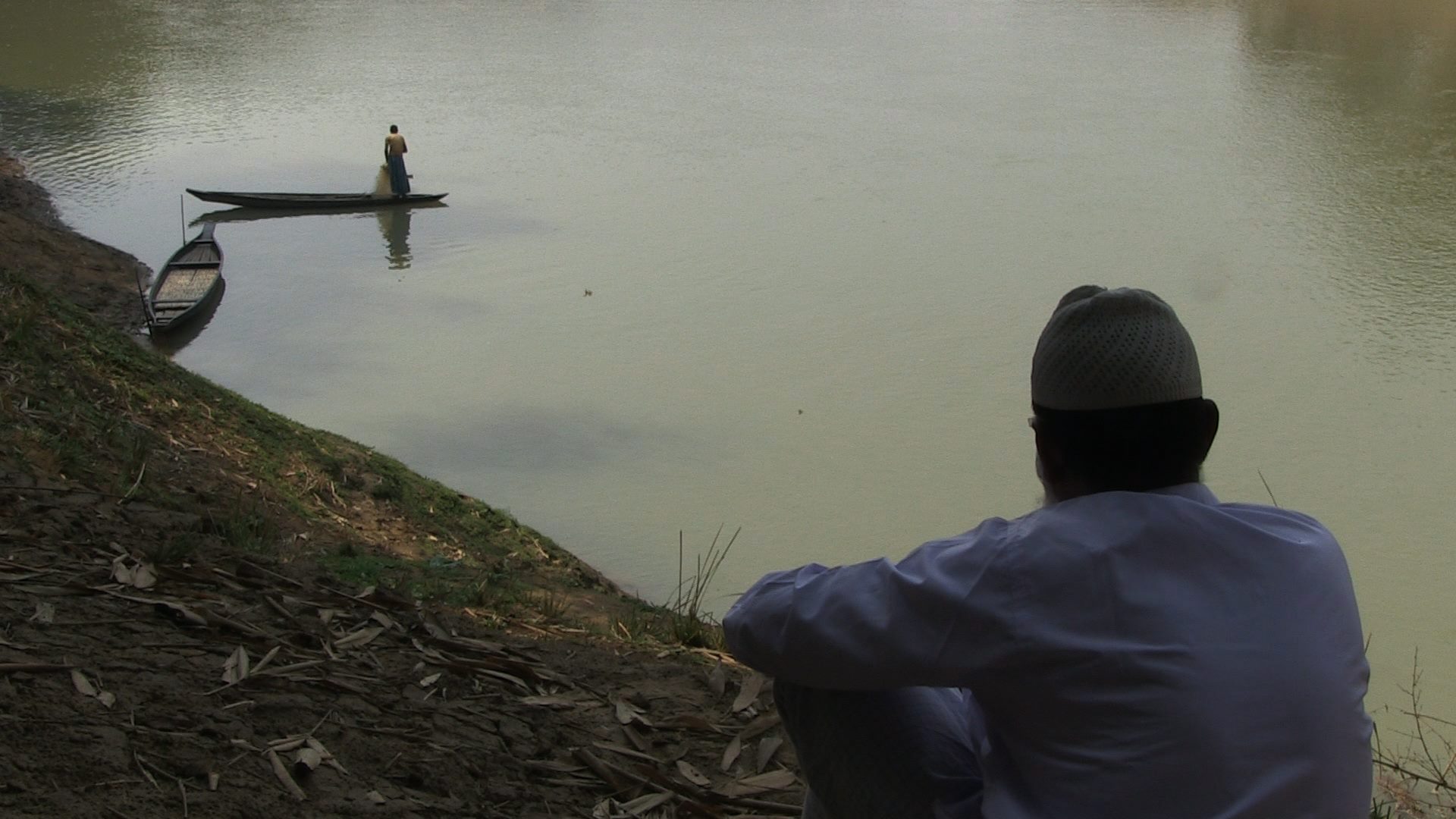 Sirajuddin and the lone boatman. Still from the film. Credit: Subasri

“To memorise the victims of history – the sufferers, the humiliated, the forgotten – should be a task for all”
– Paul Ricœur, Memory and forgetting

The human body is a place, and hence, an archive of memory. It records and tells the past, its own past, but with a difference – unlike record books, the body bears the real marks of memory. It becomes a site of recall, a source par excellence, where the recording of memory is indistinguishable from the intensity of feelings that lie within it. When the body speaks, it carries the effect of the voice, which contains the text of memory as it remembers the unforgettable. If forced to enter an unbearable landscape, the body often ends up a stuttering parrot of memory, falteringly repeating the event of loss.

Watching a documentary which speaks of an incident where more than two thousand Muslims were killed within six hours in Nellie, Assam in 1983, I noticed that the victims’ and survivors’ bodies are denied any relationship with either the sacred or the profane – they have been simply cut off from all civilised life. When people recollect events of mass mutilation, bodies become insignificant objects of violence and breakage. The individual names that belong to these bodies, their social and cultural registers, are of no importance to the state. Even the family remembers and relates to these (dead) bodies differently, as if they no longer belong to a world of shared meanings.

Abdul Khayer is less philosophical, angst-ridden, and equally bewildered. The younger son he was escaping with on his back was split into two by a weapon thrown at him from behind.

Subasri Krishnan’s What the Fields Remember, about the Nellie massacre of 18 February, 1983, is a haunting tale calmly told. It is rare to find a film documenting political violence that stays so calm. This restraint doesn’t simply come from the passage of time – more than 30 years have passed since the day of mass mutilation – but out of a conscious effort by the filmmaker to preserve the somber calmness that confronts her in Nellie and adjoining villages. Subasri’s camera pauses on the landscape before focusing on the survivors. Before they speak, they are shown in a broody, contemplative mood, sitting by the river Kopili, which, survivor Sirajuddin Ahmed says, has remained the same since his childhood. What has changed over the years, he adds, is “manush”, man. There is bewilderment and resignation in his voice, but a remarkable lack of bitterness.

Sirajuddin is a reflective victim of the massacre. Another old man, Abdul Khayer, is less philosophical, angst-ridden, and equally bewildered. The younger son he was escaping with on his back was split into two by a weapon thrown at him from behind. His eyes are still horrorstruck by that memory, and sleep does not come easily to him. Then there is Mohammad Khalilur Rahman, who sings an elegy of the tragedy, accenting its cruelty with moments of sarcasm, as he describes the inconsequential visits of Indira and Rajiv Gandhi. His voice sounds like a bird’s broken call, a slit throat that still tries to sing.

The landscape of Nellie and surrounding villages is lush: the crops are ripe, the banana and other trees heavily leaved. Khalilur sings in Bengali, “They cut us like banana tree trunks and ran away.” Tree, river, crop fields and surrounding hills become signifiers, each figure of nature a metaphor of the violence that passed by the survivor’s eyes that ominous day. Even the breeze that shakes the crop fields and trees shivers with that unshakeable moment of remembering.

The empty boat, the banana tree, and the crops swaying in the wind reverberate with a cruel reminder that their village was interrupted by unspeakable violence.

“Places seem to me” W.G Sebald wrote in Austerlitz, “to have some kind of memory, in that they activate memory in those who look at them.” In particularly striking (and fleeting) moments reminiscent of Ritwik Ghatak’s 1973 film, Titash Ekti Nadir Naam (A River Called Titas), the film pans empty boats moored on the riverside and ponds. They represent all that is missing: oarsmen, song, commerce and prosperity. To Subasri’s credit, she draws out these crucial relationships in the film: the empty boat, the banana tree, and the crops swaying in the wind reverberate with a cruel reminder that their village was interrupted by unspeakable violence. What adds aesthetic credence to a political documentary is the filmmaker’s ability to allow the mutest of connections associated with the (missing) subject to speak.

The fruitless quest for justice In the memory of any massacre, perhaps what is most difficult for the survivor to grasp is the absurd miracle of survival itself.

To dodge death, having escaped the mass ritual of violence, comes as no respite for the survivor. It is rather his good fate that haunts him, to the point of becoming intolerable. Abdul cannot sleep, finding himself awake with the unanswerable question: How did such a nightmare happen, and why him? Sirajuddin asks: “Human beings! And they kill other human beings. Why does this happen?”

Looking for answers becomes a way to restore the mind’s sanity, and leads Sirajuddin and Abdul in different directions. “Why have arms and nuclear bombs been created? What is the motive?” Sirajuddin wonders. “To kill human beings. Who will kill? Human beings themselves…” The scientific world poised to self-destruct dismays Sirajuddin, who has turned to religion for answers. He believes, some day, that Allah will solve this meaningless impasse by rendering justice. Abdul, in contrast, wants to prove his legality and earn justice from the Indian state. He collects all his papers on his bed to prove his identity as a voter predating India’s independence by 12 years. He calls the bluff off the “Bangaldeshi” tag (thrust upon many like him by the Assam Movement), reiterating that he has been a citizen of an undivided country and lived his entire life in the state of Assam. When he thinks about how the government has denied him justice, Abdul says, “a fire rages in my mind.”

This xenophobia towards Bengali Hindus and Muslims has produced bizarre, oxymoronic accusations against people considered ‘legal refugees’ and ‘illegal citizens’.

Abdul’s limited status as a citizen grants him the right to vote, but does not empower him enough to claim justice for crimes committed against him and his family. Imagine how desperate and lost a real refugee would be, who lives outside the comforts of law and yet contradictorily hopes for kinder laws and treatment. Such has been the plight of religious and linguistic minorities in postcolonial Assam.

This xenophobia towards Bengali Hindus and Muslims has produced bizarre, oxymoronic accusations against people considered ‘legal refugees’ and ‘illegal citizens’. In Assam, there are refugees from erstwhile East Bengal and Bangladesh, but the “foreigner” tag afflicts both. Migrant laws and ethical responsibilities of the state suffer from an overriding passion for xenophobic nationalism. The film notes how in a clear connivance between state authorities and foot soldiers of the genocide, not only were the Muslim inhabitants of Nellie deprived of police protection, but later, the Assam government dropped even the few chargesheets made against perpetrators.

Sirajuddin and Abdul, who are not refugees but denied proactive citizenship nevertheless, still hope for justice. Until that impossible moment arrives, the communalisation of both citizens and refugees continues unabated in the post-partitioned state. Even though What the Fields Remember tells the audience about what Nellie cannot forget, it also poses larger questions: If justice from the state is as Kafkaesque as justice from god, then what is this edifice of the modern legal system about? How can a nation-state be harsh on legally challenged refugees and politically challenged citizens, while xenophobes have a field day, with no law to hold them accountable even for committing genocide?