The choice of Kairana for Shah's first political programme in Uttar Pradesh after the assembly poll dates were announced is significant, given the BJP's allegations and campaign in the area in the 2017. 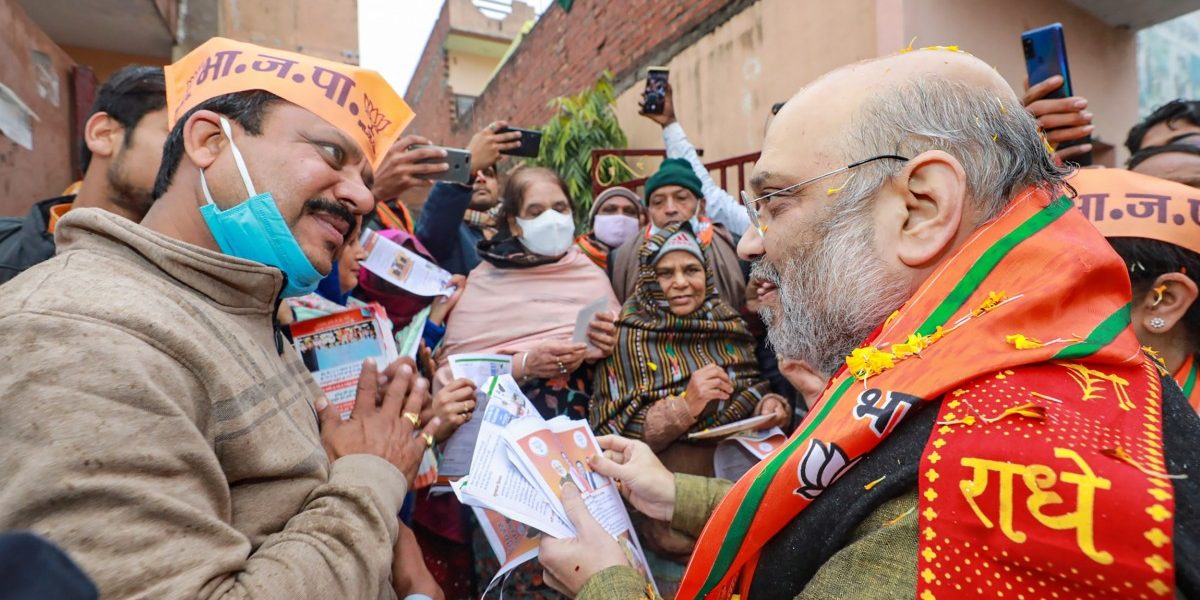 Union Home Minister Amit Shah interacts with a resident during his door-to-door campaign ahead of Uttar Pradesh assembly elections, in Kairana. Photo: PTI

New Delhi: As the Uttar Pradesh polls draw nearer, Union home minister Amit Shah has once against brought up one of the Bharatiya Janata Party’s favourite bogeys in the state – the “exodus” of Hindus from Kairana in 2017. Shah on Saturday said he had visited the affected families who have returned to the area during his door-to-door campaign.

“You don’t need to fear anyone….those who made you flee have themselves fled….if there is still anyone who has not yet returned then call him,” Shah said in the alleys, according to Deccan Herald. Accompanied by party workers and leaders, wearing saffron caps and stoles, Shah distributed pamphlets on the “achievements” of the BJP government, amid slogans of ‘Jai Shri Ram’ and ‘Bharat Mata ki Jai’.

The choice of Kairana for Shah’s first political programme in Uttar Pradesh after the assembly poll dates were announced is significant, given the BJP’s allegations and campaign in the area in the 2017.

“For the development of any state, the primary condition is that its law and order should be proper. This is Kairana from where people used to flee earlier, and today when I went on around, the people told me that ‘Modijee kee kripa ho gayee‘.

“Yogiji has improved the law and order. Those who forced the exodus have had to flee. This is the kind of confidence we are seeing in the people of UP. I think that in the coming days, Uttar Pradesh will become the most developed state of India,” Shah told reporters here.

“I would like to tell the people of UP that if you want to retain the law and order situation in UP, end appeasement and the culture of working for one caste, and develop UP under the leadership of Modijee, then the government of Yogi Adityanath should be formed once again,” Shah later told reporters.

He appealed to the people of western UP to come out and vote on February 10. “If owing to COVID guidelines, our workers are not able to reach you, then you should cast your vote early in the morning keeping in mind the five years of hard work of the BJP and the achievements of seven-and-half years of Modiji.”

”Today after coming to Kairana, I am feeling at peace due to the atmosphere here. After 2014, Prime Minister Narendra Modi took the reins of development of UP in his hand. After becoming the chief minister of UP in 2017, Yogi Adityanath accelerated the pace of development. In the entire state, a new wave of development and enthusiasm can be seen,” Shah said.

In June 2016, then BJP MP from Kairana Hukum Singh had claimed that ‘harassment’ from the Muslim population had led to a Hindu exodus from Muslim-majority Kairana in Shamli district. To substantiate this claim, he produced a list of 346 Hindu families who had apparently left the town. This list however was soon discredited, with the Indian Express reporting that the list included those who had died, left the town more than ten years before this apparent ‘exodus’ or had migrated in search o better jobs. The Uttar Pradesh police and Shamli district administration also saw similar results while investigating Singh’s list. The Uttar Pradesh government, then led by the Samajwadi Party, also denied that any such exodus had taken place.

However, the BJP did not give up its campaign.  Incorporating the issue in its election manifesto for the 2017 state assembly polls, the party promised to set up a special department in every district to stop mass migration because of communal tension.

In a documentary film about Kairana, Nakul Singh Swahney attempted to “scratch beneath the surface of such claims to reveal the larger patriarchal assault on women of both religions, by men of both religions”. According to Sawhney, the problems cut across communities and religions. “The Dalits of Kairana speak of how they’re at the receiving end of caste hierarchies upheld by dominant caste men of both religions. Muslim youth and workers speak of stark issues of unemployment in the town and the lack of any basic amenities – factors that are leading to growing criminalisation of the youth. A criminalisation that both Hindus and Muslims are victim to. The Hindus and the Jains of Kairana speak of how they’ve never felt vulnerable in a Muslim majority town.”

Kairana is a city and municipal board in the Shamli district in western UP. Elections to the Uttar Pradesh Assembly will be held in seven phases starting from February 10.