Adityanath and M.L. Khattar’s stand on the AMU and Gurgaon violence makes it clear that BJP state governments are not keen on resolving issues, and are instead eager to create more conflict. 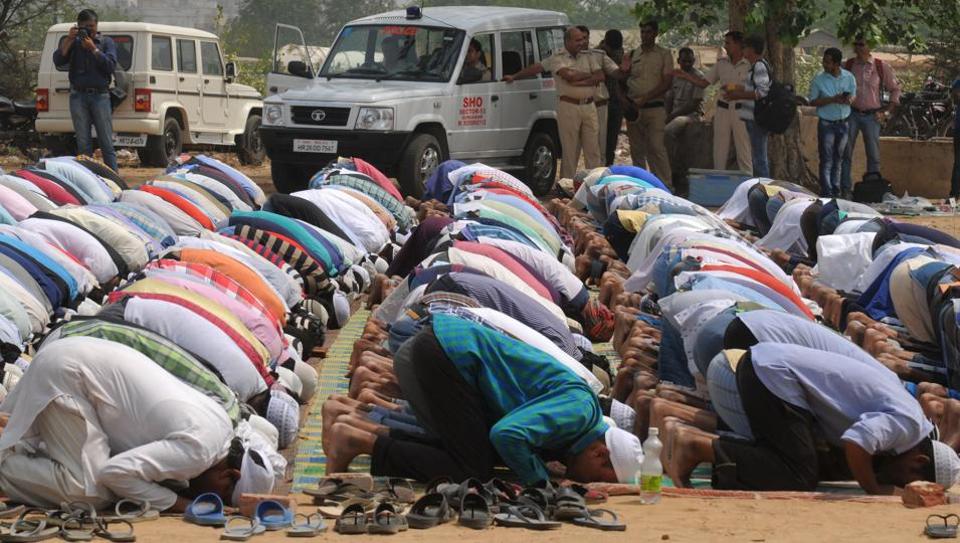 New Delhi: The manner in which Uttar Pradesh chief minister Adityanath defended the violence by right-wing groups at Aligarh Muslim University (AMU) over a portrait of Muhammad Ali Jinnah, and then Haryana chief minister Manohar Lal Khattar questioned why namaz was being offered in the open in the wake of the disruption of Friday prayers in Gurgaon, indicates that the BJP is busy finding new theatres for creating communal disharmony, social scientists The Wire spoke to said.

“This is actually a political narrative which is being constructed technically by the BJP establishment in order to secure media space which has been shrinking for them. There is a remarkable similarity between Khattar’s statement with regard to the namaz issue and the one made by Yogi Adityanath on the AMU episode,” said professor Hilal Ahmed of the Centre for the Study of Developing Societies (CSDS).

He noted that while there are mechanisms in a democratic polity and governance procedures to register a protest, in both these episodes, “lawlessness was quite evident and instead of dealing with the governance issue, both CMs tried to underline that there is a reaction against a Muslim-related issue”.

Khattar’s defence of the disruption of prayers

Following the second major disruption of Friday afternoon prayers in Gurgaon by Hindu groups who insisted that offering namaz in open public places is a ploy to grab land, when Khattar was asked why no action had been taken to prevent a repeat of such disruptions, he said that namaz should ‘ideally’ be read in mosques or idgahs and not public spaces.

The comment makes it clear that Khattar has chosen the stance of defending the right-wing groups that openly declared that they would not allow namaz to be offered in any open place in Gurgaon.

In fact, Khattar added that “there’s no problem if there is no objection from the public, but if a group or a person object, one has to take note. We’ll keep an eye on the issue”. This suggests that he believes that the Hindu groups have a valid complaint.

Even though he clarified later in the day that he had not said anything regarding stopping anyone from offering namaz, and that “it’s the responsibility of the administration and police to maintain law and order”, the message by then was loud and clear as to which side the state government stands.

In fact, Khattar’s words were lauded by various Hindu groups. Rajiv Mittal of the Akhil Bhartiya Hindu Kranti Dal said this episode would set an example for the rest of the nation as well. “The whole country is looking at how the Gurgaon administration reacts to it. Even in Muslim countries, offering namaz in the open is not permitted, and there is a fine for breaking the rule,” he was quoted as saying.

The story was no different when Adityanath spoke against Jinnah’s portrait hanging in the office of the student’s union in AMU. After right-wing groups entered the university and clashed with students while demanding its removal, Adityanath too took a stand on the issue to defend the violence saying “the man responsible for the 1947 Partition cannot be honoured in India in any manner”.

Rather than pulling up Aligarh BJP MP Satish Gautam, who had raked up the issue by writing a letter to AMU vice-chancellor Tariq Mansoor, all that Adityanath said was that he had sought a full report from the university administration as to “how and under what circumstances Jinnah’s image was put up in the students’ hall”. This despite the fact that by now media houses had reported how it had been hanging there since 1938.

But while ordering a probe, Adityanath also quipped that “Jinnah cannot be honoured in India. He’s responsible for the Partition of our country. No Jinnah eulogy is acceptable in India.”

‘BJP governments want to distract from issues of governance, law and order’

Responding to both these instances, professor Ahmed said: “So if we read it from a point of view of governance, the larger argument that both of them (Khattar and Adityanath) are making is that they are supporting the Hindutva radicals with a sweet coated statement like this. And if what Union minister V.K. Singh said – (that ‘if you are a Muslim and want Jinnah’s portrait on your walls, then this is a huge insult of your forefathers who had rejected his ideology’) – it is very evident that they would like to distract us from the issues of governance and law and order.”

Anxiety of communities being channelled into communal outrage

Referring to how Gurgaon witnessed skewed development over the past two decades, he said, “If you look at the nature of society that has evolved in Gurgaon – I won’t call it Gurgaon because that is a constructive name – there has been a kind of disparity which is incomparable. On the one hand, you have multi-storeyed buildings and on the other, you have poor and marginalised communities. These marginalised communities have some kind of resentment against the changes that have occurred due to urban development issues. It is very easy to communalise that anxiety and this is what we have been experiencing. And so Gurgaon and Aligarh are mere ‘theatres’ in that sense.”

Ahmed said there is also a similarity between the violence witnessed during the Jat agitation and the manner in which disruption of namaz happened in Gurgaon.

Gurgaon had a peaceful past, people were always independent

Overall, he said, “Gurgaon has always been a peaceful area. There was virtually no conflict between Muslims and Jats here. Actually, it is also not the correct way of looking at the issue because there are Muslim Jats and Muslim Gujjars as well. So religion is not the main identity in this region. Rather, people identify themselves through their castes.”

He further added: “In this region, there was virtually no conflict at all. And so if you look at Mewati history, in the early 20th-century census, Mewatis were categorised as Hindus and not Muslims. But now they are categorised as Muslims. Now the story of Jats fighting Muslims is also very recent, very contrary to the history of this region.”

Historically, the sociologist said, “Jats, Gujjars and other communities in the region never accepted any rule from outside, be it Sultans, be it Mughals, be it British. So they were always independent people. The transformation of the Jat identity into the Hindu identity is very recent. In fact, during the Ram temple movement too, the Jats were largely not a part to it. Even if you look at Chaudhary Charan Singh, one of the biggest Jat leaders, his politics was not at all communal. So Jats had continued to oppose BJP.”

In the case of Gurgaon, the twin factors of there being very few mosques – just about 22 – and the presence of a large migrant population, had led to the offering of prayers in open spaces in the 1990s. Since then, for all these years, the prayers have been conducted peacefully.

On the importance of Friday prayers, Ahmed said, “We have to understand the nature of summit worship. Five times compulsory prayer is something that all Muslims do. But the Friday prayers, which happen from 1 pm to 2 pm, are more sacred.”

In Gurgaon, he said there are a large number of migrant and poor people. “They just come with their own mats, offer their prayers and go away. It has never been an issue in the past.”

On the ostensible apprehensions expressed by Hindu organisations that they may usurp the public land, he said, it is a fact that “in Gurgaon, land is more precious than life” but “no mosque can be constructed on illegally gotten land. To construct a mosque you have to buy that land. In Islam, it is discouraged to construct a mosque on ill-gotten land. So land is bought before any mosque is constructed. That is the legal position and that is the reason why all the mosques have their records. So the fear that land on which namaz is being offered would be grabbed is baseless because no Muslim would do that.”

People across country opposed to prayers on roads, but not in open spaces

Referring to a national survey the CSDS conducted in 2015 to gauge the response of people about religious festivities or processions being taken out on road or being conducted in vacant plots, Ahmed said, “The overwhelming response was that we should not allow religious processions, including aartis and namaz on roads. But when it comes to offering namaz on vacant land, there is a big difference.”

Recalling how he has had “great experience in offering namaz even in temples, even the Bharat Mata temple in Haridwar” and how “people over there did not have any problem with that”, Ahmed said, “Offering namaz or doing aarti is something which should be decided by local population on a case-to-case basis. State should not interfere until and unless it involves larger public issue, like traffic.”

‘BJP is trying to create conflicts out of issues’

Pointing out how in Old Delhi, several Hindu shopkeepers offer space within their shops to Muslims to offer namaz, and how Muslims offer food during jagran, he said: “This is India and we have to revive that culture. We should also remember that there is no one Islam in India and similarly there is no one Hinduism. Also, namaz and aartis should not be seen as civilisational issues. We need to understand that there are issues which should be amicably resolved. These are not conflicts. But BJP is trying to convert them into conflicts.”

Meanwhile, professor Ashish Saxena of the sociology department of Allahabad University said the changing occupational scenario was also responsible for so many Muslims not finding enough space in mosques and therefore offering namaz in the open. “Sometimes mosques are also not close to their place of work or residence,” he reasoned.

Noting that the rise in the population had also led to paucity of space within religious places for large congregations, he said the need of the hour is for the administration to identify more spaces for the devout to offer their prayers, just as it happens for jagrans, bhandaras and even several yatras taken out by Hindus.