Ajmer: Muslim Man and a Boy Assaulted, Asked to Go to Pakistan; Five Detained for a Day

The police confirmed that the incident took place around four days ago in Subhash Nagar area, but they couldn't trace the Muslim man. Therefore, an FIR has not yet been filed in the case. 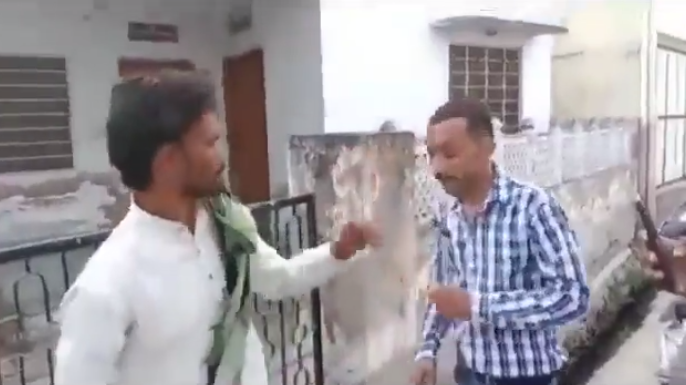 New Delhi: A video surfaced on social media where a group of five people are seen beating a Muslim man in Rajasthan’s Ajmer district and allegedly asking him to go to Pakistan, the Indian Express reported.

The victim and a few others seen with him in the video appear to have been seeking alms, the report said.

The police told the daily that they came across the video on August 20 and the the five accused – Lalit Sharma, 40; Surendra, 32; Tejpal, 27; Rohit Sharma, 32; and Shailendra Tank, 31 – were taken into preventive custody the next day. They were arrested under Section 151 CrPC (arrest to prevent the commission of cognisable offences).

In the video, one of the accused is also seen kicking the head of the boy accompanying the victim.

This is in Chandrvardai Nagar, Ajmer, Rajasthan.

"Pakistan jaa," this man says as he slaps a Muslim beggar with his two children. In the video, he kicks on the head of the young boy.

The incident took place around four days ago in Subhash Nagar area, which comes under Ramganj police station, the police confirmed. However, they couldn’t trace the Muslim man, and said that he must have come from another state.

A first information report has still not been filed in the case.

“If the victim comes forward and submits a complaint, an FIR will be lodged under sections relating to disrupting communal harmony,” Mukesh Kumar Soni, circle officer, Ajmer South told the daily.

The accused were detained for a day, presented before a magistrate and released on bail.