Aggressive Hindutva in Karnataka is Unsurprising; it has Been 25 Years in the Making

Minority communities have come under attack in Karnataka even during the BJP's earlier spells in power; the difference this time around is the open and articulated support provided to these elements by the BJP government. 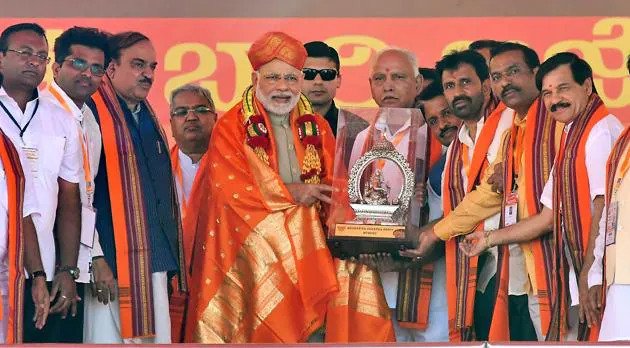 Prime Minister Narendra Modi at a campaign rally ahead of the 2018 Karnataka assembly elections. Photo: PTI.

Bengaluru: What is surprising about Hindutva organisations’ recent aggressive and relentless attack on the lives, livelihoods and culture of Muslims in Karnataka is only its pace; not its substance. Minority communities were under relentless attack by the so-called ‘fringe forces’ of the parivar even during the Bharatiya Janata Party’s (BJP’s) earlier spell in power from 2008-13.

Even then the B.S. Yeddiyurappa government – as well as those of two other BJP chief ministers, Jagdish Shettar and Sadananda Gowda – during its tenure protected these elements, although indirectly, keeping a formal distance from the trouble makers.

The difference this time around is the open and articulated support provided to these elements by the BJP government; that too, from the highest level. Added to this is the silent concurrence – and sometimes, active support – given to these organisations and their acts by the dominant castes, classes and sections of society, thereby legitimising and bring into the mainstream the unconstitutional agendas behind these acts.

Thus, these recent acts of Hindutva aggression, intended to remove Muslims physically and culturally from increasingly Hinduised public spaces through orchestrated attacks on their Hijab, Halal, Azan and even a potential economic boycott of Muslims, is not at all a fringe phenomenon.

The emboldening of Hindutva in the recent past

These attacks stem from the heart of the changing polity and society of Karnataka. It is true that Karnataka had once been a progressive state with communal harmony embedded in community life. But Karnataka is undergoing a metamorphosis.

Take, for example, the open admission by Karnataka assembly speaker Vishweshwar Hegde Kageri from the chair that he is proud to belong to Rashtriya Swayamsevak Sangh (RSS); or the open declaration by senior BJP leader K.S. Eshwarappa, a minister in chief minister Basavaraj Bommai’s cabinet, that a day will come when the bhagwa dhwaj (saffron flag) will become the national flag and that he would work in that direction.

Even during the Hijab controversy, many from the treasury bench openly declared that India is a Hindu state and that one cannot compare the Hijab with Hindu markers of identity in classrooms.

And when the Sri Ram Sene and other infamous Hindutva organisations resorted to imposing a ban on Muslim vendors in the vicinity of the Hindu temples and annual temple congregations, state law minister J.C. Madhuswamy cited some unrelated rules, framed by the erstwhile Congress government, to legitimise such acts.

Chief minister Bommai, himself, justified the Bajrang Dal’s aggressive and violent acts few months prior, calling them a reaction to the high-handed acts of the Muslim community.

In the recent Halal controversy, Hindutva organisations called for Hindus to boycott Muslim meat vendors since they use to ‘Halal’ cut while killing the animals. ‘Halal’ in Arabic means ‘permissible’ and refers meat cut in accordance with Islamic laws.

Instead of protecting the constitutional right of the Muslim vendors to conduct their business and acting against the Hindutva criminals, chief minister Bommai assured the Hindutva groups that their “grievances” would be seriously considered and acted upon.

And in another unfortunate development, the BJP government has given its consent to withdraw over 300 serious criminal cases against Hindutva activists.

The above examples show that these recent aggressive and unconstitutional acts by Hindutva organisations are in line with the agenda of the BJP. Therefore, the developments in Karnataka cannot be explained away by citing a change at the helm of the government; that would be a simplistic explanation and would miss the larger undercurrent.

The BJP in Karnataka – and for that matter, elsewhere too – has chosen strategies in proportion to its ideological influence on society and its electoral strength at a given point in time. While it never compromised on its core Hindutva agenda, it has been accommodative and flexible in its public articulation.

Thus, even the Yeddiyurappa or Eshwarappa of 1994, when Hindutva as a political ideology or organisation was relatively weaker, would look like centrists compared to their avatars in 2008 or today. Once they came to power, however, they became infamous for their corruption and nepotism, and also worked along with RSS with a strategy and design.

This had been part of a long-term goal of realising a ‘Hindu Rashtra’ by mobilising the society and saffronising institutions. Thus, the Hindutva agenda and the aggressiveness attached to it is strategic and structural. In the last 25 years or so, Hindutva organisations have been systematically capturing public spaces and strategically saffronising their ever-expanding electoral base.

For example, the dominant Lingayat community of North Karnataka, which was disenchanted with the Congress for its anti-feudal articulations, found the BJP as its natural shelter.

Thereafter, the egalitarian past of the Lingayats was successfully saffronised over the last 25 years. First, the BJP garnered the support of the elites of Lingayat Mutts through budgetary grants and by catering to their business interest in the fields of education and so on. Then, it co-opted the community into the broad corporate body of ‘Vishva Hindutva’, like the Vishwa Hindu Parishad (VHP). 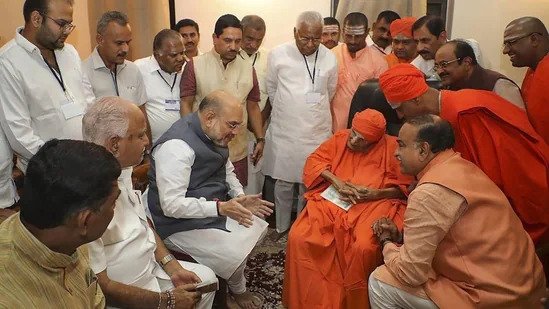 Most Lingayats in the past would refuse to identify themselves as ‘Veerashaivas’ because it the latter is a sub-sect of Hinduism. However, the Congress, which tried to accord a separate religious status to Lingayats, was defeated by a huge margin in the 2018 elections in North Karnataka, where Lingayats constitute the majority of the electorate. This was nothing but the outcome of consistent ideological work that the Parivar resorted to among its electoral base.

Also read: Making Sense of the Lingayat vs Veerashaiva Debate

Union home minister Amit Shah’s even made a recent visit to Siddaganga Mutt in Tumakuru to attend the 115th Shivakumar Swamiji Jayanti where he detailed the BJP government’s attempts to implement the teachings of late seer of the Mutt.

The case of the Vokkaligas, another dominant community in Karnataka, is similar. Their seer has been the vice-president of the VHP for a long time and most of the native leadership cadres of Sanatan Sanstha, the organisation accused of assassinating journalist Gauri Lankesh, come from this community.

In the last state elections, educated elites had coined the slogan, “Kumaraswamy for CM, Modi for PM”. H.D. Kumaraswamy is a former Karnataka chief minister from the Vokkaliga community from the Janata Dal (Secular) party. Yet, in the last Parliamentary elections, even though the JD(S) and the Congress had a pre-electoral alliance, many studies reveal that most Vokkaligas voted for BJP. 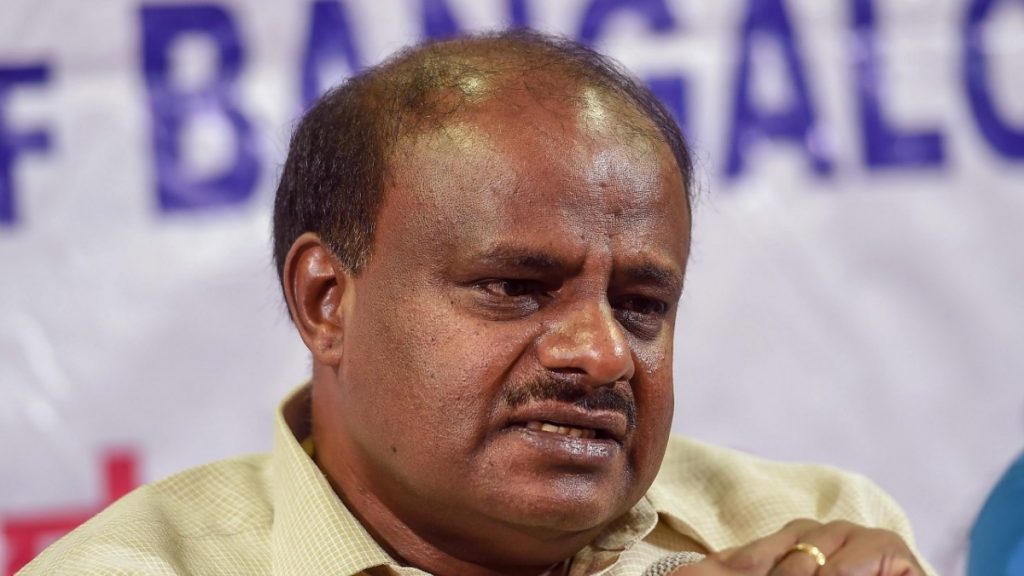 Likewise, the BJP has been trying to woo the Madigas, too. The Madiga community had been making demands for the internal reclassification of Scheduled Castes (SC) reservations for a long time and, although the demand was most democratic, none of the previous governments took it seriously. The Parivar, however, seized the opportunity and have been successful in amplifying their dissatisfaction to break apart Dalit unity.

Still, the BJP has been successful in breaking the Dalit unity and, at the same time, in maintaining their non-untouchable SC support base, such as the Lambanis and others, through aggressive anti-conversion and other Hindutva agendas.

The BJP’s efforts towards social engineering and the political and ideological mobilisation of their support base for over two decades, are paying dividends today.

In fact, during the 2019 Parliamentary elections, the BJP got more than 51% vote share and won 25 out of 28 seats in Karnataka. What’s more, aggressive Hindutva propagandists like Tejasvi Surya, a political novice who today is calling for people to find a ‘final solution’ to the question of Indian Muslims; and Anant Kumar Hegde, who spits anti-Muslim venom day in and day out, were elected by the people of Karnataka with unprecedented margins.

This is completely in-line with the second coming of Modi government with a more convincing mandate on its aggressive Hindutva agenda. This emboldened Hindutva forces to unleash their hitherto hidden or subdued Hindutva agenda in full swing.

This has also convinced the Parivar strategists that this Hindutva agenda, along with the Modi card, is enough to win elections and that they can do away with their ‘soft’ agendas, democratic pretensions and their dependence on influential caste and community leaders, like Yeddiyurappa, at the state level.

As such, chief minister Bommai, whose background was in Ram Manohar Lohia’s Janata Party; or Assam chief minister Himanta Biswa Sarma, who comes from a Congress background, no longer carry their independent existence. Their political survival is possible today only through the aggressive implementation of the Hindutva agenda.

The Parivar has now built a belligerent ‘Hindu Samaj’; an aggressive Hindu vote bank; a semi-permanent communal majority, as B.R. Ambedkar had cautioned against. This Hindu samaj will elect and re-elect those promising a Hindu Rashtra.

Until an alternative agenda and politics break it apart, aggressive communalism should come as no surprise.

Shivasundar is a senior columnist and activist in Karnataka