The rise in the number of communal incidents targeting Muslims has happened after a local unit of the Bajrang Dal was established, villagers in Chhatral say. 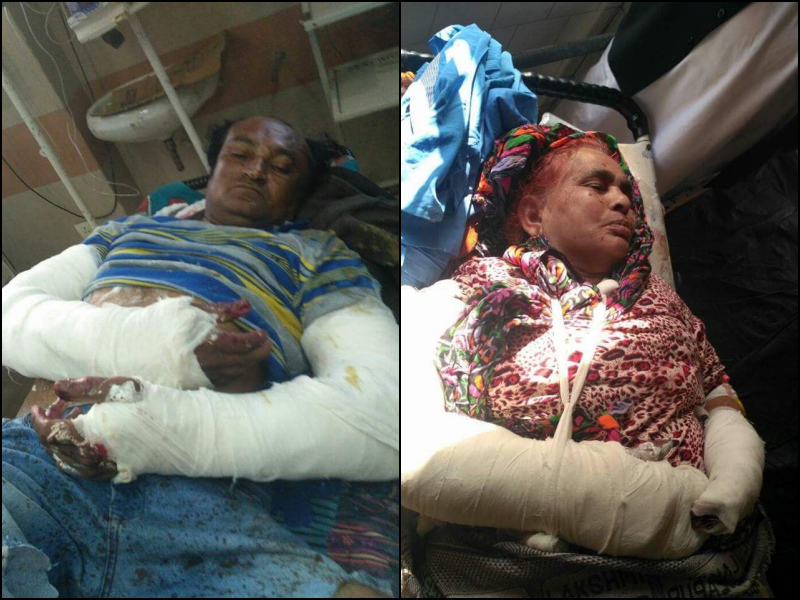 Chhatral (Gujarat): On March 5, Farzan Hussain Saiyyed, a 32-year-old farmer from Chhatral village, Kalol taluka of Gandhinagar district, left his home early in the morning to graze his cattle and get to his farm. His mother, 52 year old Roshanbiwi, had accompanied him.

At around 5:30 am, the mother-son duo were attacked by Bajrang Dal members and left grievously injured. Saiyyed, who had suffered multiple fractures including on his hands and skull, succumbed to his injuries at V.S. hospital, Ahmedabad, on March 12. Roshanbiwi had her fingers chopped off, and is still battling for her life.

“The 50-bigha land that our family has is in the non-Muslim area of the village,” Aslam Saiyyed, Farzan’s cousin, said. “The ancestral land hasn’t been divided since 1956. For decades, our family members crossed their area (the area of the village where Hindus reside) to reach our land. We never thought there would come a day when we would be attacked in our own village for being Muslim.” 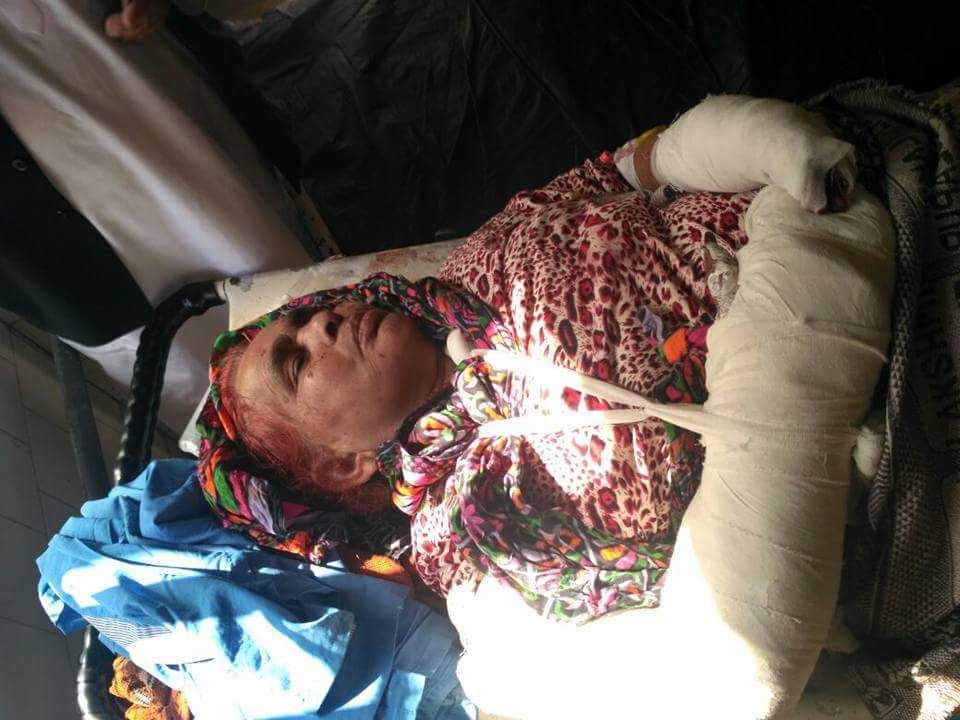 Roshanbiwi, who is still fighting for her life in V.S. Hospital. Credit: Special arrangement

He added there had always been “scuffles” between members of the different communities in Chhatral, but that they had never turned bloody. “Even during the riots of 2002, Chhatral witnessed minor incidents like stone pelting. The elders of the communities would always manage the issues,” he said.

On March 5, an FIR was registered against Amit Kalia alias Amit Patel, as prime accused, along with Ankit Nadia, Bado Mukhi, Dharma Patel, Trikam Patel, Avnesh Patel, Dhimant Patel and three others. All of them are members of the Chhatral unit of the Bajrang Dal. The Kalol police arrested the prime accused on March 7 and the others within a week.

“Two of the accused were arrested from Goa and as per our reports, another two were arrested from the farm house of Atul Patel, former BJP MLA from Kalol, who is known to be a close confidante of the deputy chief minister, Nitin Patel,” said Shamshad Pathan, a lawyer who has been helping the victims’ family.

“However, we do not know if the police has mentioned that in their report. Besides, among the accused are the sons of the sarpanch and deputy sarpanch of the village. It is quite clear that these accused were being protected by people in power and were arrested only after multiple protests and representations to the director general of the police.”

“Miscreants of Bajrang Dal have been indulging in acts of violence for the past two months now. We have been warning the concerned authorities about communal tensions in Chhatral, but in vain,” Pathan added; he is also a member of the Alp Sankhyakh Adhikar Manch, Gujarat.

Chhatral has been witness to multiple incidents of communal violence in the last two months. It all started after the Bajrang Dal and the Vishwa Hindu Parishad organised a ‘Swabhiman Rally’ on December 6 to mark the anniversary of the Babri Masjid demolition. The yatra passed through Kasba, an area at one end of Chhatral where about 300 Muslims families reside, while participants shouted communal slogans and songs.

A month later, on January 20, there was a scuffle between one Ankit Narnia, a Dalit man reportedly associated with the right-wing organisations of Chhatral, and Saiyyed Akram, a local Muslim man. The Kalol police promptly registered a case; Akram and Narnia were both arrested soon after.

“The right-wing elements of the village tried hard to pit it as a matter of Dalits against Muslims, thereby painting it as communal. However, due arrests were made and the matter subsided,” Pathan said. 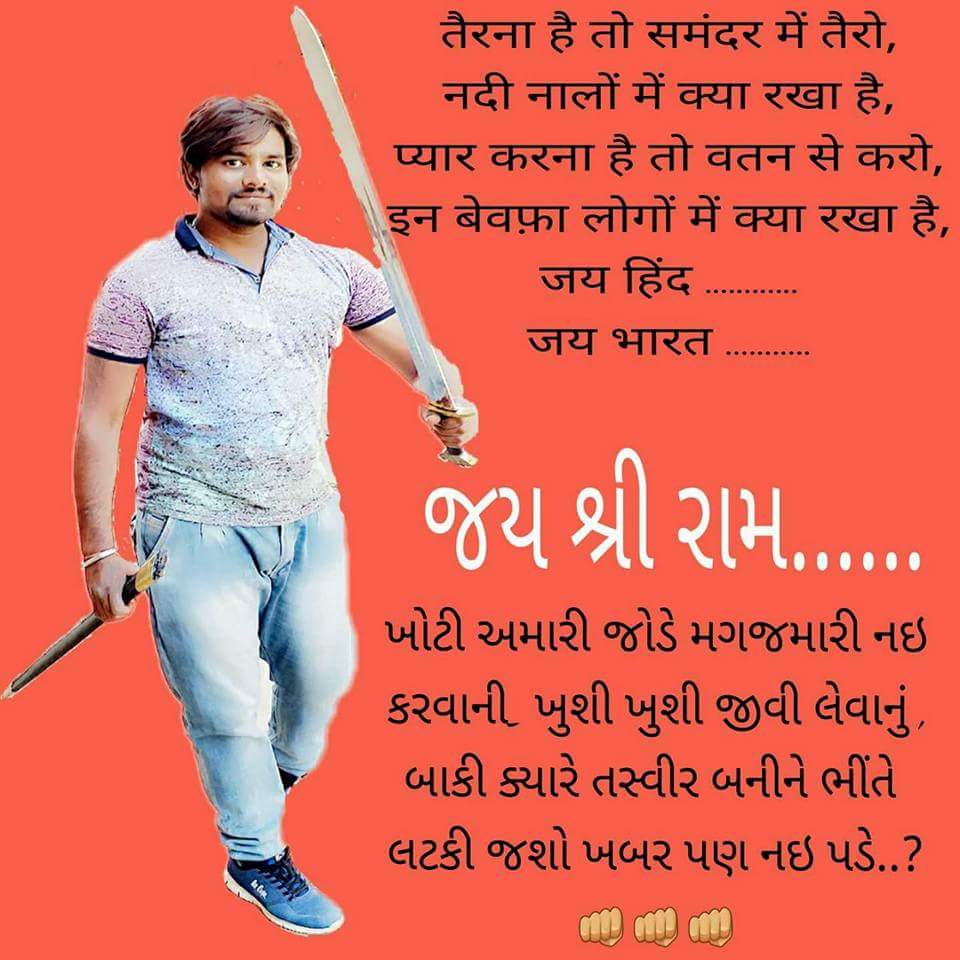 Amit Patel featuring in a poster with a sword. Credit: Facebook

According to Saiyyed Ramiz Maiyyuddin, a resident of Chhatral, “The next incident was on January 21, when the right-wing activists of the village attacked the village dargah, breaking a door and a gate. Following the incident, a memorandum was submitted to both the police and the district administration by more than 200 people representing the Muslims of the village.”

“On January 26, Noor Alam, a boy in his late 20s, was brutally attacked with swords by men from the Bajrang Dal. Alam used to work in an eatery owned by a villager named Mehboob Mallick. He suffered grievous injuries on his head and body; he got 24 stitches on the left side of the body and 13 on the right. An FIR was registered by Mallick, but nobody was arrested. Five accused named in the FIR are also the ones who also attacked Faizan and his mother. A native of Uttar Pradesh, Alam was so scared for his life that Mallick had to let him go,” said Aslam Saiyyed, Faizan’s brother and also a resident of Chhatral.

A month later, on the day of Shivratri, Harun Mallick, another Muslim villager was also attacked by the same group of right wing activists and he suffered fracture in both his hands. This time too Muslims of the village filed a complaint but no one was arrested.

“About ten days before Faizan and his mother was attacked, the right-wing group members of the village were sitting near a temple very close to Kasba and drinking alcohol. In their revelry, they were using inciting language and making much noise. The Muslims, however, did not react. Incidentally, some constables and home guards came along and asked them to stop. Instead of heeding them, the men retaliated by stone pelting. The police personnel ran towards Kasba and took refuge in Muslim homes while asking for reinforcement. Responding to their call, a police inspector arrived with a few personnel in a police jeep and tried to stop them. The men thrashed the police and vandalised the jeep. Then the police inspector called for more forces and about 300 police personnel arrived, making 16 arrests,” said Aslam.

“Had police arrested all of these men after the first incident, my brother would have been alive today.”

A sense of fear prevails in Chhatral

After this series of incidents, Chhatral remains tense and a sense of fear looms amongst the Muslims, even though the police has been deployed. The village stands divided, as Muslims have stopped venturing into areas where Hindus reside and Hindus have stopped coming towards Kasba.

“The children have not been going to school for two months now. Muslims who live in Kasba have been procuring goods to fulfil daily needs from street vendors in their area. Women have stopped going to the milk depot that is in the Hindu-dominated area,” Kaushar Ali Saiyyed, an activist who led a fact-finding committee after Faizan’s death, told The Wire.

“Those named in the FIR and arrested are indeed members of the Bajrang Dal. However, they have been framed. The attack was carried out by someone else due to family animosity and they (Muslims) blamed our boys. In fact, at the time of the incident, two of them were not even in Chhatral,” Dharmendra Patel, head of the Bajrang Dal in Chhatral, told The Wire.

Bajrang Dal was established in Chhatral six months ago, with just three members. The organisation is currently 1,100-member strong in the village dominated by Patels (with about 1,200 Patel families), followed by Thakors, Rabaris, Dalits and Muslims.

“Organisations like the RSS and Vishwa Hindu Parishad were already functioning from Kalol, but the Chhatral unit of the Bajrang Dal was established six months ago,” said Patel. “Villagers who are inclined towards propagating the Hindu religion join us.”

On January 7 this year, a programme was organised by the Bajrang Dal in Chhatral in which they distributed trishuls. Reportedly, police permission was not taken for this event.

“Since January, men from the Bajrang Dal have been training students and other members every Sunday evening in the government school in Chhatral. The local police knows this and yet refuses to act,” said Ramiz Maiyyuddin, a villager.

Amit Kaliya alias Amit Patel, a resident of Chhatral and a Bajrang Dal member, was arrested on March 7 for the attack on Faizan and his mother. Patel, who has multiple FIRs against him, has never been arrested before. 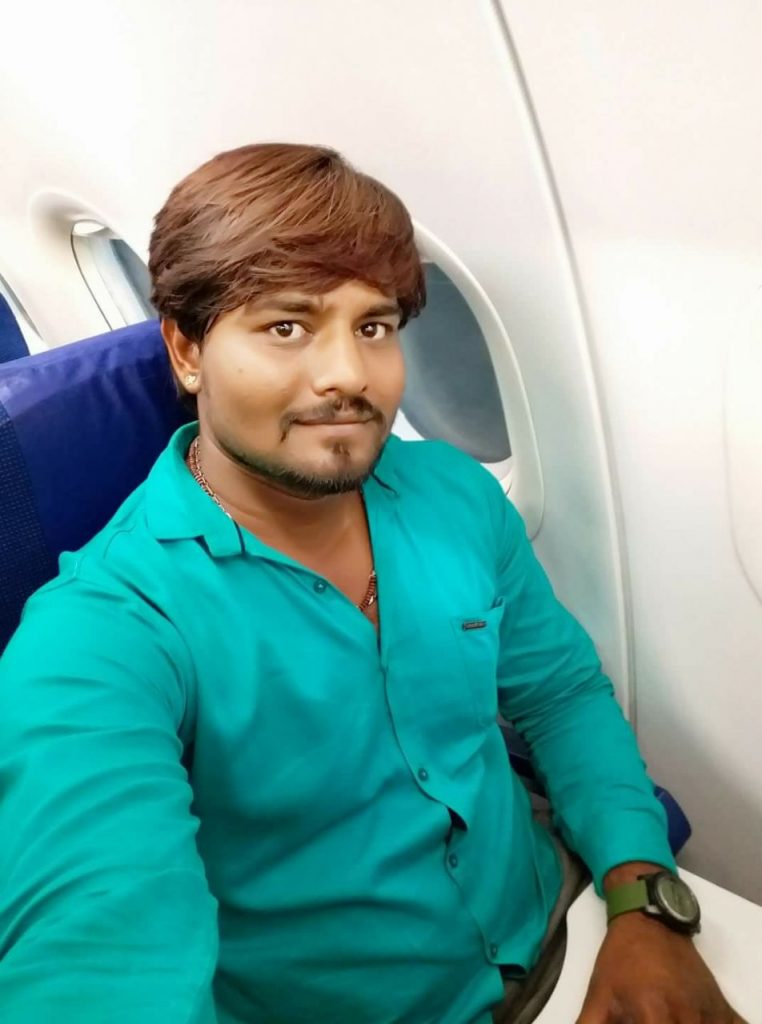 The first FIR against him was in 2014, for beating up students of Kalol Commerce College under the pretext of ‘love jihad’. A second FIR was registered against him in 2015, for looting weapons amid the Patidar agitation lead by Hardik Patel.

In the same year, several other FIRs were registered against him: one for theft and vandalisation of the office of the Kalol deputy superintendent of police; one was registered in the Kalol taluka police station for attempting to murder a man of the Thakor community and a policeman; one for arson of a police chowki and attempting to murder a police personnel inside the chowki; one was registered for extorting money and thrashing locals; and one for vandalising vehicles and holding locals captive, and beating them.

Patel was also amongst those who distributed trishuls in the village on January 7 and was named in the FIR for attacking Noor Alam a few months ago, and Faizan and his mother on March 5. Patel also has complaints against him registered in the Mehsana district.

“Patel had filed an anticipatory bail application after being arrested for the first time on March 7. However, the Kalol sessions court rejected his anticipatory bail plea after protests and representations by the Alp Sankhyakh Adhikar Manch, Gujarat,” stated advocate Shamshad Pathan.