Aaj Tak ran broadcasts suggesting that the Congress will seek votes based on ‘Jinnah’s genie’ while issues of development and corruption will take a backseat.

An edited screenshot of the Aaj Tak show.

The Congress party has fielded former Aligarh Muslim University (AMU) student leader Maskoor Usmani as a candidate for the upcoming Bihar assembly elections. He will be contesting from Jale constituency in Darbhanga district of Bihar. Usmani’s candidature has given the BJP a fresh opportunity to criticise the Congress, and thus, ithas accused Usmani of being a ‘Jinnah supporter’.

Aaj Tak ran broadcasts suggesting that the Congress will seek votes based on ‘Jinnah’s genie’ while issues of development and corruption will take a backseat.

The graphic plate below reads, “Maskoor Usmani had installed Jinnah’s portrait while he was AMU [students’ union] president.” 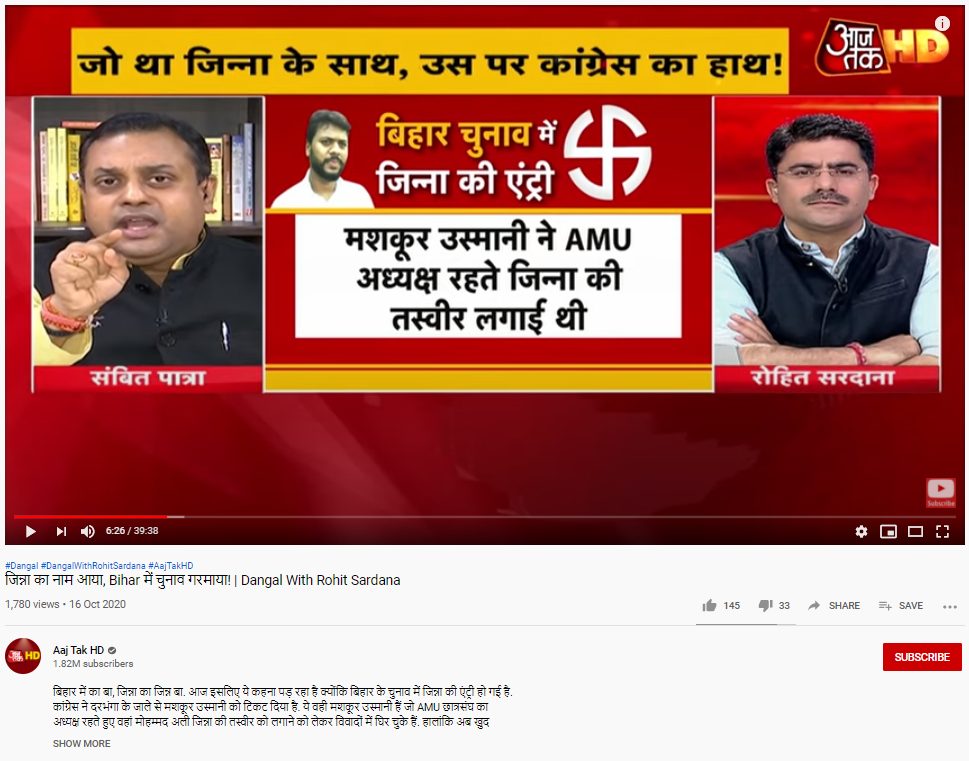 At 6:20 minutes into the broadcast, BJP spokesperson Sambit Patra expressed his grief over Congress’s decision to give Usmani a ticket — “It’s not important who wins or loses elections. Today, India is losing. The oldest national party because of which India was partitioned is again trying to gain votes by selling Jinnah. I am saddened, not happy.”

To this, Sardana said, “Patra ji, you have peered into my heart. But look into your heart too and tell me if you’re not satisfied that they’ve given him a ticket and you can now highlight how he is a massive anti-national?”

That Jinnah’s portrait has been hanging in AMU since 1938 is public knowledge.

The issue raked up controversy in 2018 when armed activists from the Hindu Yuva Vahini descended on AMU campus with alleged police support to demand that the portrait be taken down. Scores of students were injured in the violence.

Visuals of police charging students with lathis and firing tear gas shells were also reported in the media.

AMU vice-chancellor Tariq Mansoor had dismissed the row over Jinnah’s portrait on the campus as a non-issue. 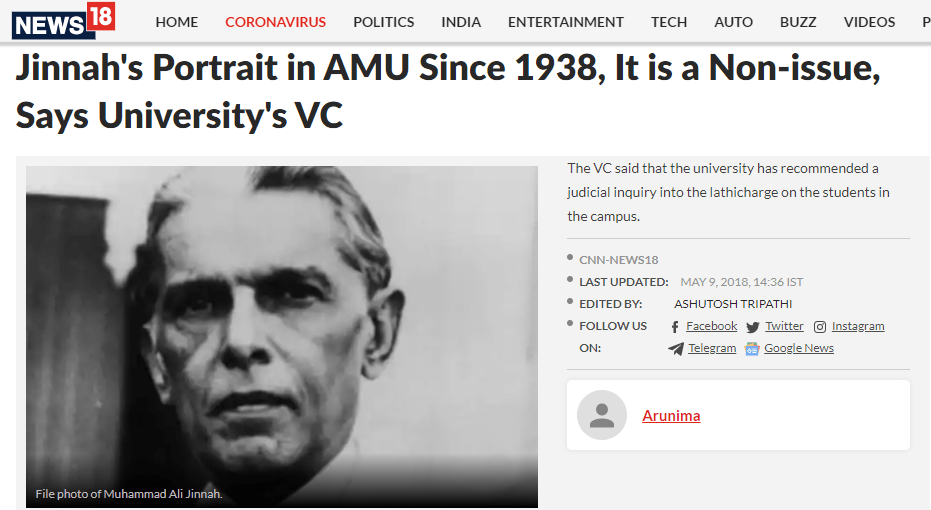 “A country’s history has dark as well as bright pages. No one in AMU supports Jinnah’s two-nation theory, but we must accept that he is an important part of India’s history,” former AMU students’ union president Masksoor Usmani had told The Telegraph. Usmani’s objection to the BJP’s demands to remove the portrait was preserving history.

His video statement was broadcast by News Nation on August 7, 2018 where Usmani said, “It is the students’ union’s autonomy to decide what should be done to the painting. This isn’t new. Why does this question keep coming up? It’s because they want to make Jinnah an agenda in the 2019 elections…the portrait is just history which has been in the campus not since today but 80 years. We have said multiple times that Jinnah is our history, not religion.”

During the Jinnah row, 94-year-old Riaz-Ur-Sherwani who was present when AMUSU unveiled Jinnah’s portrait in 1938 told the media that the matter was a “personal affair” of the students. “Sherwani is known to vehemently oppose Jinnah and his policies, however, he says that when the portrait was put up, the “circumstances of the country were different” and no outsider can dictate what is to be hung in the university hall,” wrote News18 in a May 6, 2018 report.

In an opinion piece on The Tribune, journalist Karan Thapar discussed that the decision to hang Jinnah’s portrait in AMU was based on his politics in the early 20th century. “The Jinnah of the first three decades of the 20th century was a very different person to the man the Pakistanis call Qaid-e-Azam,” Thapar wrote.

Maskoor Usmani told Alt News that the narrative being peddled in the media, that he installed Jinnah’s portrait, is false propaganda. “I’d like to clearly and boldly state that I do not hold any views that support Jinnah in any aspect. The movement that had followed in AMU in 2018 had been on different issues and the corrupt ways of the media focussed to highlight a portrait hanging in the Union Hall to disrupt the movement and damage the name of the institution and mine as the leader of the students’ union at the time.

Firstly, let me state this with complete assurance that the portrait issue was a controversy to divert the attention of the populace. Secondly, that particular portrait hangs there not because I deemed it so. Jinnah’s portrait hangs along with the greatness of Jawaharlal Nehru and Mahatma Gandhi. At the time this issue had sprung up, I had addressed a letter to PM Modi and Rajnath Singh stating that neither the movement or I had no issue in removing the portrait in totality,” he said.

The Congress gave Usmani a ticket instead of former Railway Minister Lalit Narayan Mishra’s grandson Rishi Mishra who said that he left JD(U) to contest from Jale. Mishra termed Usami  “anti-national and Jinnah worshipper” claiming that he has the Pakistan founder’s photo in his office.

“It is a shameful act by a person who wanted to acquire a ticket from Congress. Now when he has not gotten it, goes on to bash the Congress party’s name. All these statements being narrated are proof of how they fear the party moving up. I further suspect that people like him [Mishra] out of resentment for me and the party are spreading the propaganda to make me seem wrong in the eyes of the people and the party,” Usmani further said.

Aaj Tak’s claim that Maskoor Usmani hung a portrait of Jinnah inside AMU campus is false. The portrait has been there since the pre-Independence times.

The article was published on Alt News. Read the original here.