Uttar Pradesh’s Iron Fist Strikes Down Against Dalits Once More

While a protest against the killing of Dalit youth Rohit Jatav was denied permission in Meerut, at the same protest site, farmers and workers were allowed to express their grievances. Meerut: On September 4, the Allahabad high court impugned the detention order under the National Security Act (NSA) of three persons accused of being involved in caste violence that occurred last year in Uttar Pradesh’s Saharanpur. Thakurs and Dalits clashed in three connected but distinct incidents of violence in May last year, leaving one man from each community dead. Following the violence, several Dalits and Thakurs were arrested. The draconian NSA was applied against six persons – three Dalits, including the leader of the Bhim army, Chandrashekhar Azad and three Thakurs.

The three that have been granted relief by the Allahabad high court are Thakurs. Against the Dalits, NSA continues to remain in force and they continue to be in jail. The state has acted steadfastly and renewed the application of NSA on the Dalits whenever it was about to lapse.

One of the lawyers representing members of the Dalit community, Dalip Kumar, believes that the nature of the cases against the Thakurs and Dalits is similar, begging the question why the NSA has not been impugned against only the Dalits. “It is clear that the state has acted in a manner that is biased. The lawyer representing the state in the case against Thakurs did not make a strong plea. Whereas, the state has argued strongly in the case against Dalits,” he said.

Since April of 2017, tensions between the dominant Thakur caste and the minority Dalits had been simmering in Shabbirpur. The Dalits wanted to install a statue of B.R. Ambedkar in the Ravidas temple. The Thakurs had objected to this proposal and the police had asked the Dalits, in the ‘interest of peace’, to put their plans on hold. “The natural order of society cannot be changed in a day. The Dalits have to understand that,” a police official in Saharanpur had told me at the time.

On May 5, 2017, the Thakur community took out a procession commemorating Maharana Pratap. The Dalit community objected because the “DJ was too loud”. This led to violence as a mob armed with swords, thick bamboo sticks, country-made revolvers and bottles filled with petrol ransacked the Dalit ghetto of the village, burning down 55 homes. Several Dalits were grievously injured. One member of the Thakur community died.

A few days after the violence, the Bhim army – a small and relatively unknown Dalit social organisation at the time led by the young and charismatic Chandrashekhar Azad – called for a mahapanchayat in Saharanpur town to protest against the violence in Shabbirpur. The police denied them permission and the protest turned violent as vehicles were set ablaze, stones were pelted and a police post was damaged.

On May 23, Mayawati visited Shabbirpur and held a public meeting. A group of Dalits were allegedly attacked by Thakurs near Sarsawa as they were returning to their village after the meeting. One Dalit was killed and several other were grievously injured.

For the Shabbirpur violence, six FIRs were filed – one by Dalits, one by the police and four by the Thakurs. Five Dalits, including the sarpanch of the village, were booked for the murder of the one person who died. More than 50 Dalits, according to the lawyers representing them, were arrested, while nine Thakurs were arrested. Two Dalits who were accused of murder were subsequently booked under the NSA and are still in jail.

For the Saharanpur violence, cases were registered against every known member of the Bhim army, many of whom rose to national prominence while in hiding. Azad, and several other members of the Bhim army were eventually arrested in June. Azad was granted bail by the Allahabad high court on November 2. A day later, he was booked under NSA.

For the Sarsawa violence, cases were registered against several Thakurs, and three were later booked under the NSA.

Now, Azad and two other members of the Dalit community continue to be in jail, facing NSA charges. While, the Thakurs who had also been booked under NSA have been released.

There are several such instances of the state’s iron-fist coming down harder on Dalits, particularly in the past year-and-a-half when caste violence has been on the rise in UP, particularly in western UP.

On April 2, the Bharat Bandh called by Dalit organisations to protest against what they called dilution of the SC/ST (Prevention of Atrocities) Act, turned violent. Several incidents of violence occurred across UP with Muzaffarnagar and Meerut being the districts that suffered the most. One person was killed in each district.

In both districts, cases were registered against more than 700 people, most of whom were Dalits, for their alleged involvement in the violence. Around 200 people were arrested in Meerut, while more than 100 were arrested in Muzzafarnagar. Many of them continue to be in jail. 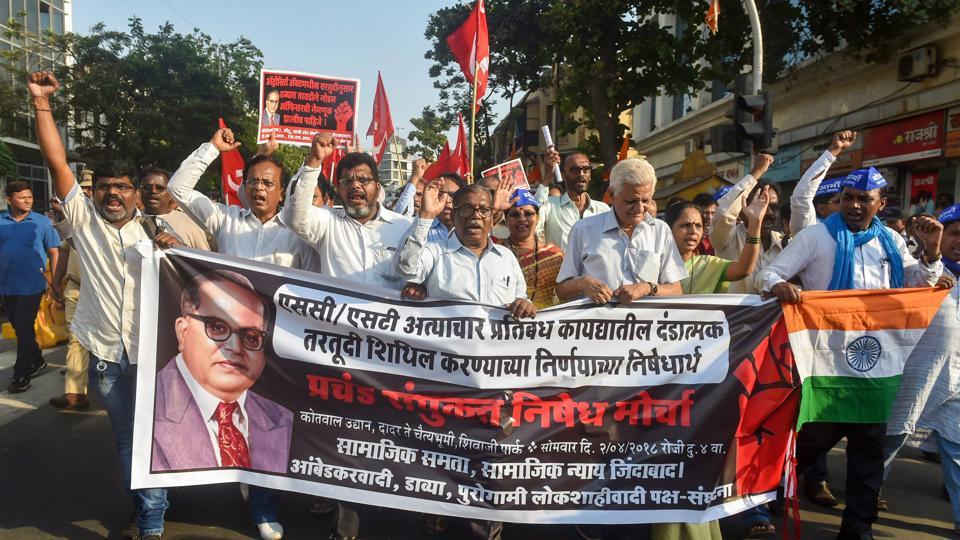 In recent times, Dalit communities across India have taken to the streets protesting injustice against the community and the perceived dilution of the SC/ST Act. Credit: PTI

As The Wire’s Prashant Kanojia had reported in June, 12 of those who had been arrested were minors. Among the charges that the police filed against them were criminal conspiracy and attempt to murder.

“Can such young boys be part of criminal conspiracy, dacoity and attempt to murder? The way they have booked all of them under same sections, it seems the police has just selectively chosen members of Dalit community and arrested them without verification of facts or proper investigation. It was the police’s duty of the police to investigate who was involved. But they just randomly arrested Dalits,” advocate Satish Kumar who is representing the juveniles told The Wire at the time.

According to the parents of the juveniles who were arrested, they were not a part of the violence that occurred and were targeted for being Jatavs, a Dalit sub-caste. “My son had gone to buy medicines in the evening after the violence was over. He is 11 years old and 4 feet tall. How can he be involved in violence? They have only arrested young boys of the Jatav community to send a message. To show us our place,” the mother of one of the juveniles said.

Now, all except one juvenile have been released on bail. But, they continue to face serious criminal charges.

Not allowed to protest

On August 30, around 500 Dalits, primarily from Uldepur, a small village not very far from Meerut’s city centre, reached the Chaudhary Charan Singh park – the city’s designated protest space – to hold a ‘Dalit mahapanchayat’. Their grievances were: police’s failure to arrest members of the Rajput community in Uldepur who they alleged were responsible for the murder of 17-year-old Rohit Jatav on August 9; counter-charges filed by the accused against Rohit’s family, other members of the Dalit community from Uldepur and Rohit himself; and unfair targeting of Dalits.

The police came down hard on the protestors. Six activists, led by a young and tenacious Dalit leader from Meerut, Sushil Gautam, were chased by the police for days and their houses were raided on the eve of the protest, while they were absent. The police attempted to apprehend the activists again on the morning of the protest. They failed again. Finally, the activists were detained by the police as they reached the protest site. Officers present told the activists that they were not allowed to protest as section 144 (that prohibits the assembly of five or more people in the area that it has been imposed) of the Criminal procedure code (CrPC) had been enforced. 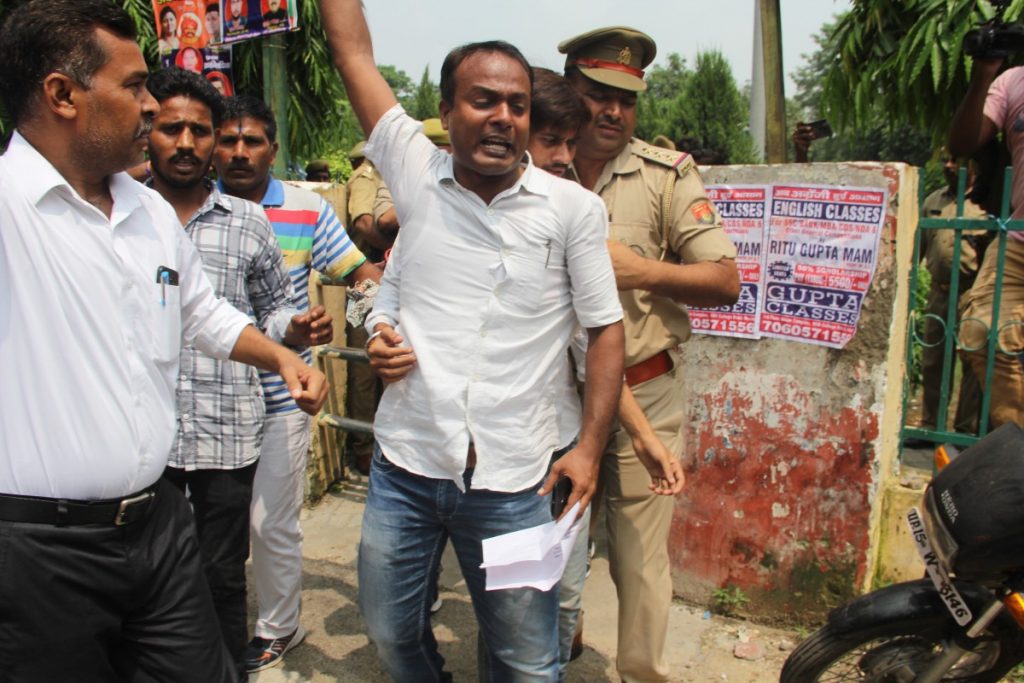 Activist Sushil Gautam being detained after section 144 was invoked only against the protestors demanding justice for Rohit Jatav. Credit: Munish Kumar

At the same site of protest, two other set of protestors – around 50 farmers demanding that their sugarcane dues be paid and a group of around 200 workers demanding higher wages – were allowed to express their grievances. When this was pointed out to the police, they said, “protests for this issue (the issues being raised by Dalits) are not allowed.”

Two weeks earlier, on August 14, members of the Rajput community from Uldepur, including those accused for Rohit’s murder, held a mahapanchayat. The protest space they chose was the same – the Chaudhary Charan Singh Park. According to a Times of India report, thousands of Rajputs gathered to protest against ‘biased investigation aimed at targeting Rajputs’ in the case of Rohit’s murder. The protest was allowed and section 144 of the CrPC was not invoked.

The Dalit protestors, on the other hand, on August 30, were hurriedly packed-off in the tractors and tempos that they had travelled in and sent back to their villages. The police, numbering well in excess of 200, cordoned off the protest space, making it out-of-bounds for Dalit protestors, even as protesting workers and farmers, who remained unaffected by the imposition of section 144, went around the circular park shouting slogans against the Uttar Pradesh government.

“Hum jab bhed-bhav ke khilaf awaz uthane ki koshish karen tab bhi humare sath bhed bhav hota hai (When we try and raise our voice against discrimination, even then we face discrimination),” Lakhsmi Devi, mother of Rohit Jatav told me when she was being sent away by the police.