'Lawless UP,' Say Opposition Parties as Dalit Man Beaten to Death Over Rumour He Sold Daughter

Opposition parties have alleged that the five perpetrators of the Mainpuri violence were members of the rightwing Hindu organisation, Bajrang Dal. 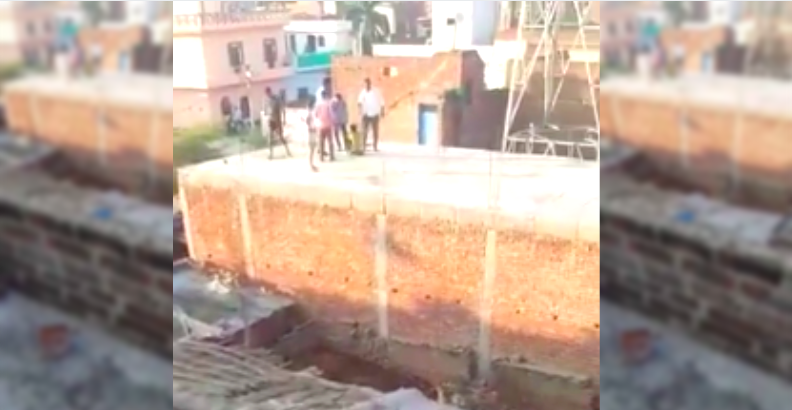 A screengrab of the video of the violence on Diwakar.

New Delhi: The death of a Dalit man after he was lynched by alleged members of a rightwing organisation has sparked a row between Uttar Pradesh’s Adityanath-led BJP government and opposition parties that have alleged a spike in caste-based violence.

On Sunday evening, a vicious assault by five men led to the death, on Monday, of 45-year-old Sarvesh Diwakar at a hospital in Uttar Pradesh’s Mainpuri. Opposition parties have alleged that the five were members of the rightwing Hindu organisation, Bajrang Dal.

Police are unconvinced of the five men’s political affiliation.

Newspaper reports have claimed that Diwakar, a daily wage worker, was targeted by the five accused after rumours spread that he had sold off his daughter.

However, Diwakar’s acquaintances informed local reporters that he had merely sent his 16-year-old daughter to Noida to stay with her relatives and continue her studies from there after the pandemic and lockdown left Diwakar without any income.

Diwakar also sent his wife to another relative’s house in Kolkata, a reporter who covered the incident told The Wire. He added that the family had been struggling to survive because of lockdown restrictions.

Police, however, could not confirm whether Diwakar’s assault was connected to the rumours against him. The video of his assault which went viral on social media shows five men kicking and slapping Diwakar on the terrace of his home. He appeared to plead for mercy. However, the mob continued to beat him until he was immobile.

Police have claimed that they have already arrested four of the five involved in the crime.

News of Diwakar’s death comes within two weeks of a video clip from Mainpuri itself going viral, where a Dalit widow and her partner were shown to be physically and verbally assaulted by upper caste men of the village. The couple’s heads were tonsured and they were garlanded with shoes.

Opposition parties have come out strongly against the state government in the aftermath of the recent incident. The Samajwadi Party shared the video clip of the assault and alleged that Bajrang Dal workers were the offenders.

The Bahujan Samaj Party, viewed as a party of Dalits, refrained from directly implicating any organisation in the assault, but aimed their attack at the state government which has been making positive claims on the improvement of law and order, a perpetual concern in UP.

BSP chief Mayawati pointed to an emerging trend in her tweet. “Yesterday in UP, Sarvesh Kumar, a Dalit, was beaten to death in Mainpuri and similarly Gobind Chauhan in Maharajganj, Rajveer Maurya in Shahjahanpur, Wasid in Bareilly, Sudhir Singh in Kushinagar and Vinod Garg (Brahmin) in Banda. Incidents of shooting, killing etc. are very sad,” Mayawati tweeted, adding that this exposed the lies in the tall claims made by the state government.

Another incident of mob violence

An incident of mob violence emerged from Kushinagar district on Monday, leading to a greater political hue and cry about alleged lawlessness in the state.

A viral video clip showed policemen in Kushinagar’s Rampur Bagra village in riot gear trying, and eventually failing, to stop a mob from beating a man with sticks. The police said that the man who was being beaten up had allegedly shot and killed a teacher, the motive of which is unclear at the moment. The man later died at a hospital.

“The man tried to run out of the house after killing Sudhir Singh, but he saw people from the neighbourhood gathering outside. So, he went inside and climbed onto the roof. He fired a few shots with his pistol to scare away the crowd. Our police team reached the spot within a few minutes. While they were trying to apprehend him, the crowd turned violent and started attacking him, which resulted in his death,” the Kushinagar SP said.

The station-in-charge has now been suspended for negligence.