UP: Outrage as Dalit Boy Dies After Alleged Beating by Teacher Over Wrong Answer 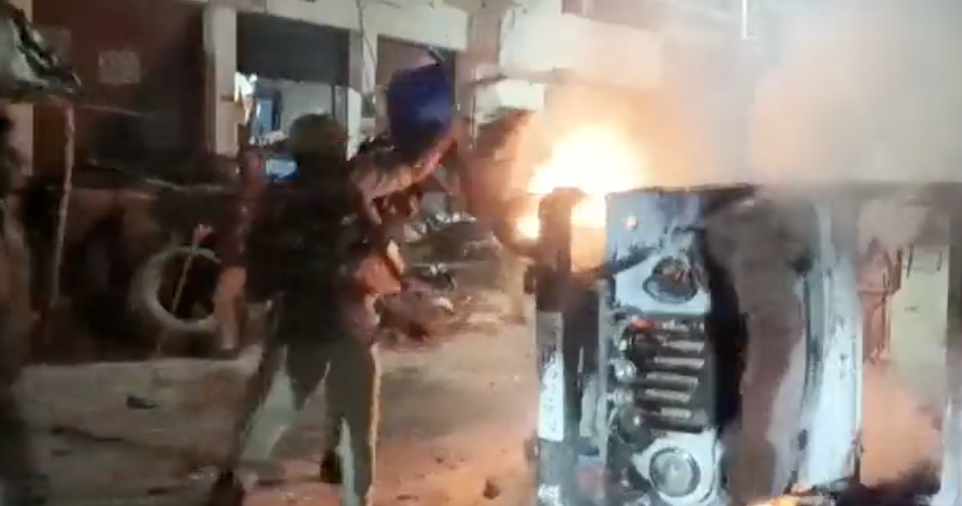 A video screengrab showing a police vehicle in UP's Auraiya on fire in protests after a minor Dalit boy died after having been assaulted by his teacher.

New Delhi: Protests have broken out in Uttar Pradesh’s Auraiya district after a 15-year-old Dalit student died two weeks after he was allegedly physically assaulted by a school teacher over a wrong answer in a test.

Two police vehicles were set on fire and some private vehicles were also damaged in an outburst that followed after the minor’s body was released to his family after the post-mortem. Protesters also agitated with his body outside the school where the assault allegedly took place, Indian Express has reported. Protesters also pelted stones at police, it has been reported.

In UP's Auraiya, amid protests over the death of a dalit minor student who was allegedly beaten by his teacher, protestors resorting to violence tried to torch a police jeep. pic.twitter.com/l0vzYv7WM5

The teacher, who belongs to an ‘upper’ caste is on the run.

He has been booked under sections 308 (attempt to commit culpable homicide), 323 (voluntarily causing hurt) and 504 (intentional insult with intent to provoke breach of the peace) of the Indian Penal Code. Sections of the Scheduled Castes and Scheduled Tribes (Prevention of Atrocities) Act have also been invoked.

The father has said that the teacher, having initially promised to pay for the boy’s medical treatment, gave the father Rs 40,000. He then stopped taking the father’s calls, according to his complaint. The boy’s father also said that when he confronted the teacher, he was abused with casteist slurs.

The boy received medical care at Etawah and Lucknow in the last two weeks. On Sunday, when his condition allegedly worsened, he was taken to a hospital in Saifai, where he was said to have been brought dead.