The girl is still not in a condition to speak to the police and narrate the incident, the deputy inspector general said, noting that the doctors are constantly monitoring her condition. 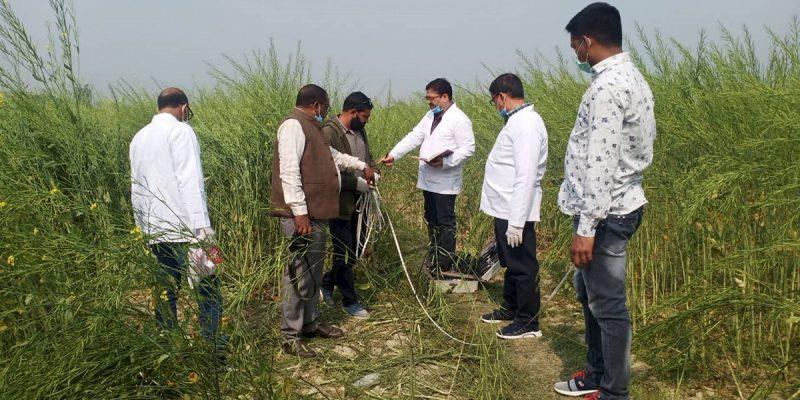 Officials investigate the site where bodies of two minor Dalit girls were found in a field and another in critical condition on the evening of February 17, near Baburaha village in Unnao district, February 19, 2021. Photo: PTI

Kanpur: The minor girl, who was found along with her two cousins in an agriculture field in a village in Unnao district, was taken off ventilator support on Saturday after showing improvement, a senior police official said.

The girl has shown improvement and doctors decided to take her off the ventilator, Kanpur deputy inspector general (DIG) Preetinder Singh said. The girl is still not in a condition to speak to the police and narrate the incident, the DIG said.

The doctors are constantly monitoring the girl’s condition, he said.

Heavy deployment of police force has been made at the hospital to ensure the safety and security of the girl.

On primary assessment, the girl was found in shock. As a suspected case of poisoning, she was shifted to the intensive care unit (ICU) at the paediatric ward, the medical bulletin issued by the private hospital said, where she is undergoing treatment, said.

The victim was admitted to the hospital in intubated condition and was on bag and tube ventilation. Later, she was shifted to the ICU and treatment was given to her, the medical bulletin further stated.

On Saturday, the third day of treatment, the girl was put off the ventilator and has been going through spontaneous respiration, it added.

Three girls – aged 16, 15 and 14 – were found in an agriculture field in Babuhara village of Asoha police station area by the villagers on Wednesday night when they did not return after leaving their house to take fodder for cattle. The local residents had rushed the teenagers, who are all related to each other, to a hospital where two of them were declared brought dead.

The 16-year-old girl was rushed to a district hospital and later referred to the hospital in Kanpur where she is undergoing treatment.

The UP police on Friday arrested two people in connection with the deaths of the two teenage girls, accusing them of murder over a one-sided love affair.

One of the accused held in the case is a teenager, according to police. “Vinay Kumar, alias Lambu, and a teenager have been held in connection with the case. The matter is a fallout of a one-side love affair. The accused gave some pesticide with water to the three girls,” Lucknow range inspector general Laxmi Singh had said on Friday.