The recent protests by Dalit groups signal a shift from hope to disappoint with the BJP as tiredness over mere symbolism grows. 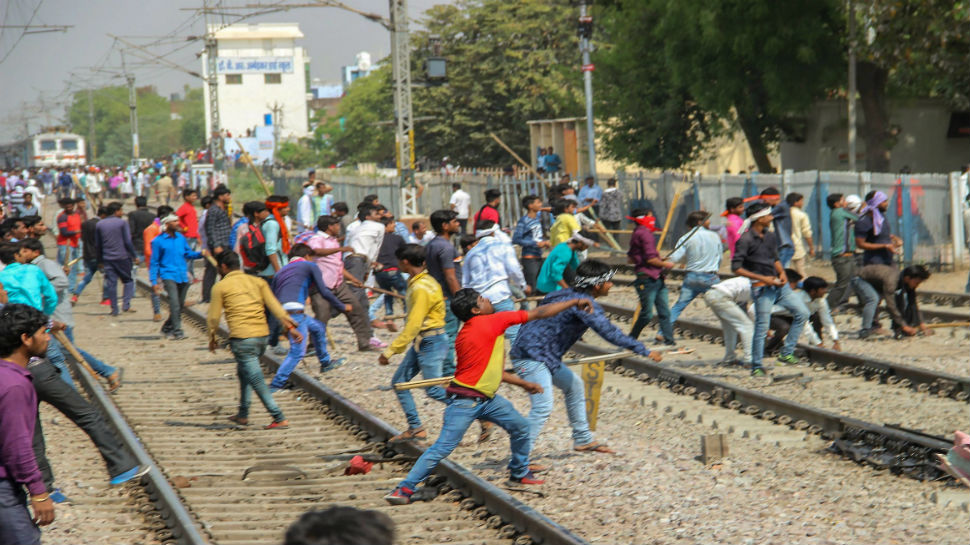 The violent protests by Dalit groups, particularly in the Hindi heartland, against the apparent reluctance and delay by the government in filing a review petition in the Supreme Court against its March 20 order that called for changes in the SC/ST (Prevention of Atrocities) Act, 1989, point to exploding Dalit anger.

While India has witnessed agitations by Dalits in the past, the scale of the protest, which has spread across several states, with 11 persons killed and scores injured, public property damaged, use of social media and anger visible on the street, is perhaps unprecedented in recent times.

While the central government has been quick to blame the opposition parties of encouraging the protests, at least two important reasons underlie the ‘Bharat Bandh’, organised by Dalit groups. First, the 1989 Act was passed almost 40 years after Independence, and Dalit leaders argue it was the result of much struggle against an unequal and oppressive society and polity, and are not willing to listen to the reason of misuse put forward by the Supreme Court. They feel it is an attempt to dilute the Act, which will have strong repercussions on Dalits who have recently experienced a series of atrocities, with little protection from the government.

Second, with rising political consciousness and aspirations, a younger generation of Dalits today are upset, they feel that the BJP under the leadership of Narendra Modi used their support to win the 2014 national elections and more recently the 2017 UP assembly elections, but has not fulfilled the promises it made prior to and after these elections.

The historic importance of the 1989 Act

The BJP leadership has not understood the importance of the SC/ST Act of 1989 for Dalits since it was passed and its importance today in the increasingly divisive and polarised politics that it has promoted. After Independence, the Protection of Civil Rights Act was passed in 1955 to protect all citizens, but particularly the weaker and disadvantaged sections. By the late 1970s, the sharp increase in crimes against Dalits, partly due to greater reporting with rising consciousness, led to demands for a more stringent Act.

By the mid 1980s, two other features were apparent leading to the passage of the SC/ST Act, 1989: the nature of crimes had changed, the reasons were now as much economic and political as social; ‘ritual untouchability’ was replaced by caste atrocities, such as not allowing Dalits to vote, defilement of statues of Dr B.R. Ambedkar, burning houses, killing, rape, etc. Much of this arose out of social jealousy, as sections of Dalits were able to improve their economic condition with education and use of reservation to gain government employment. More so, most of the crimes were perpetrated by the middle castes – the traditional dominant landowning groups – who found that a younger generation of landless Dalits in the countryside were no longer willing to submit to humiliating practices as in the past.

The 1989 Act is also the end product of a long-term process of democratisation leading to Dalit assertion, rise of movements and formation of the Bahujan Samaj Party (BSP) in 1985 by Kanshiram, and the upsurge from below in many other states in the Hindi heartland.

The Act initially led to greater confrontation and crimes against Dalits in the 1990s by backward castes, particularly the Yadavs, who as landowners emerged as their direct oppressors. It was the formation of two coalition governments by Mayawati in 1995 and 1998 in Uttar Pradesh, and the rigorous implementation of the Act by her government, that gave greater confidence to Dalits to use the Act and created fear of punishment among perpetrators. Good examples are the appointment of at least 25% of thana in-charges (SHOs) from among Dalits, and fast disposal of disputes over land and access to drinking water sources etc. Against this backdrop, the argument that the Act is often misused does not appeal as it is perceived as the duty of the state to ensure that this does not happen.

For those citizens who think that the 1989 Act is draconian, a look at the corresponding Act against racial abuse in South Africa is instructive. Following the removal of apartheid, South Africa set up a Reconciliation Commission which framed an Act based on Schedule 6 of the new constitution – the Promotion of Equality and Prevention of Unfair Discrimination Act, 2000.

What is noteworthy for us is that the Act represents a great advance over the SC/ST Prevention of Atrocities Act 1989 in India, because it forbids and defines “hate speech, harassment and discrimination” by individuals, government and private organisations in a very comprehensive manner covering a wide range of activities, and links them to “human dignity”.

Employment discrimination is excluded from the ambit of the Act because it is addressed by the Employment Equity Act, 1998. The Act specifically lists race, gender, sex, pregnancy, family responsibility or status, marital status, ethnic or social origin, HIV/AIDS status, colour, sexual orientation, age, disability, religion, conscience, belief, culture, language and birth as “prohibited grounds” for discrimination, but also contains criteria that courts may apply to determine which other characteristics are prohibited grounds.

The Act establishes divisions of the high court and designated magistrates’ courts as “equality courts” to hear complaints of discrimination, hate speech and harassment. There are no court fees apart from a small fee to witnesses, though this can be waived by the presiding officer, and lawyers are not needed. While due to poverty and lack of information, individuals still do find it difficult to approach these courts, the South African record in providing justice to those who have suffered racial abuse of any kind, is better than in India.

Hope and disillusionment with the BJP

The 2000s have witnessed a new social churning among Dalits in north India arising out of the weakening of identity politics, disappointment with the social justice parties and aspiration for development, which is reflected in their shift towards the BJP in 2014 election. Having achieved a modicum of political empowerment, identity and self-respect in the 1990s, the lower castes are in search of a party that can offer them economic betterment.

These changes made them vulnerable to mobilisation by the BJP, which in the 2014 electoral campaign attempted to create a new social coalition based on a subaltern Hindutva ideology, consisting of the upper castes and sections of the OBCs and Dalits to build a larger support base, giving the lower castes a feeling of being included in the Hindu identity. After gaining a full majority in the Lok Sabha based on support from sections of the Dalits, the new government speedily attempted to build bridges and consolidate its support among these groups.

Two significant moves were the various attempts to appropriate Dalit icon Dr. Ambedkar, beginning with the laying of foundation stones for an International Centre in Delhi, a memorial at the Indu Mills Compound, the Dr Ambedkar Memorial in London and a committee to celebrate his 125th birthday among others, and second, the installing of Ram Nath Kovind, a Dalit from UP as the president, all during 2015.

However, a number of incidents beginning in 2015, and the lack of remedial steps by the BJP, have angered Dalits such as the suicide of Rohith Vemula, the Una incident when seven Dalits were assaulted by cow vigilantes, the Saharanpur incident in 2016 when Dalits were attacked by middle and upper caste villagers, attacks on Dalits at the Bhima-Koregaon commemoration in January 2018, and finally the present Supreme Court ruling that could dilute the SC/ST Act.

These developments have fuelled a new, all-India Dalit consciousness and younger leaders such as Jignesh Mevani and Prakash Ambedkar who are leading mass movements; the ideas and forms of mobilisation used by the older leadership no longer seem to appeal.

Dalits, unlike in the 1990s, are divided into a number of groups: pro-BSP, pro-BJP and new organisations such as the Bhim Army and other smaller organisations in different states. BJP’s allies, Ramdas Athawale of the RPI and Ram Vilas Paswan of the LJP and Dalit leaders who joined the BJP recently, such as Dr Udit Narain have come forward demanding a review of the Supreme Court judgment.

The large and violent movement by Dalits across all the states of the Hindi heartland ruled by the BJP today, point to disillusionment, unhappiness and rising anger against the party. Rapid social change in the Hindi heartland compelled the BJP an upper caste party to move downwards and build a more inclusive social coalition, promising to bring the lower castes within the ambit of the larger Hindi identity and provide rapid economic development.

However, the protests signal a growing shift from hope to disappoint with the BJP which they feel has played the politics of mere symbolism to win elections, but given them little in return.

An important question which arises is will this new social coalition, stitched together by the BJP be able to sustain itself. It is a heterogeneous coalition in which the upper castes are still numerically dominant and the Dalits and backwards are jostling for space and power. The Dalits do not have a place of any significance within it.

For example, after the formation of a government in UP, the OBCs have emerged as a strong aggressive force as the BJP has given them plum posts, with lesser importance being given to the Dalits. Neither the BJP government at the Centre, or in the states in the Hindi heartland, has shown evidence of substantial policies that could help the lower castes, particularly the Dalits.

While the new strategies and promises of social inclusion and economic advancement enabled the BJP to emerge as a dominant force in 2014, it remains to be seen if it can be sustained and enable the party to perform well in the 2019 elections.