In this short memoir 'Waiting for Visa', B.R. Ambedkar describes his personal struggles as a Dalit. Seventy years since, not much has changed.

At the end of the slim, well-brought out volume Ambedkar: The Attendant Details (Navayana, 2017) is the short essay written by Babasaheb himself, ‘Waiting for a Visa’.  This is a short memoir that is different in style and content from everything else he wrote. It is a personal memoir and the contents are as poignant as the title. 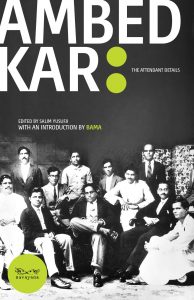 What does ‘Waiting for a Visa’ mean? It certainly means the lifelong wait full of pain and longing that most Dalits have to undergo outside various kinds of spaces. Real spaces like schools, barber shops, homes, temples, localities and so on. And, of course, imagined spaces like those of equality, fraternity, solidarity. The title conveys the unbearable tension and unspoken fear of rejection experienced by all those who have waited for an entry to the ‘promised land’. For those like Babasaheb who harbour hopes of such an entry despite the strong conviction that this is not to be, this tension and fear is unbearable. Of course, the resonance that the title finds in the much later Waiting for Godot is incredible.

In this short memoir, Babasaheb describes incidents that occurred at regular intervals in his life when excitement, happy anticipation and a sense of achievement were shattered by insult and injury and the cruel realisation of what untouchability really meant and how inescapable it was for someone born a Dalit.

In addition to his own memories, Babasaheb also describes a few incidents which debunks the widely-held assumption of many smug, upper caste people – that education erases both caste-prejudice and caste-discrimination.

One of the incidents that he describes is what befell ‘an untouchable school teacher in a village in Kathiawar and is reported in a letter which appeared in Young India, a journal published by Mohandas Gandhi in its issue of December 12, 1929’.  Of course, the association of this incident with Gandhi’s journal gives an added twist of tragic irony to its telling, something that certainly was not lost on Babasaheb who never believed that Gandhi was a real opponent of untouchability given that he was committed to the preservation of Chaturvarnya.

The letter in question says:

On the 5th of this month, a child was born to me. On the 7th, she (his wife) fell ill…I went to call a doctor but he said he would not go to the house of a harijan, nor was he prepared to examine the child.  I went for help…The Nagarseth stood surety to the doctor for my paying his fee of two rupees. Then the doctor came, but on condition that he would examine them only outside the harijan colony…There the doctor gave his thermometer to a Muslim, he gave it to me and I gave it to my wife and then returned it by the same process…The doctor…said that the patient was suffering from pneumonia.  The doctor went away and sent some medicine…The doctor refused to see her later, although I gave the two rupees fee. The lamp of my life has died out. She passed away at about two in the afternoon.

I had just put down the book after finishing it when I got the following message:

What do Yogi and his ministers who talk about eating in Dalit homes have to say about this incident that occurred in Jaunpur, Eastern UP?  When a doctor learned that the patient was a Dalit, he refused to touch her. When the family pressured him, he demanded Rs 1,000 to touch her and when they refused to pay, he kicked the stretcher. The stretcher fell down the stairs and the patient, a village school teacher like the widower in Babasaheb’s story, died.

I immediately got in touch with the Dalit Shoshan Mukti Manch (DSMM) comrades in Jaunpur. They went and met the bereaved family whose complaint the police had refused to register and it was only after he approached the court that an FIR was filed. The incident took place on the May 17, but no arrests had been made as on May 25. In fact, the police were pressurising him to withdraw the case. DSMM activists are meeting some lawyers in Machhlishahr (the tehsil of Jaunpur in which the incident occurred) and will also meet the district administration.

Ambedkar had once said that after the constitution was adopted it would take a hundred years to get rid of untouchability and caste. More than 70 years have passed and it now seems like he might have been optimistic in his views.